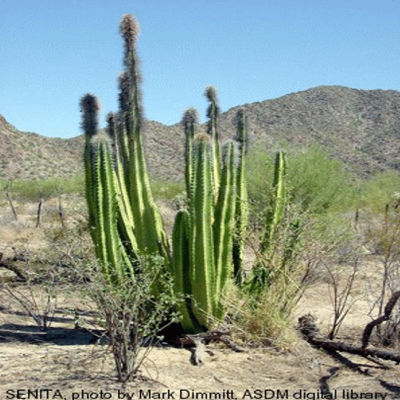 This is the tale of two cacti, the Senita (also known as the Old Man Cactus) and the Totem Pole cactus. You see both around town. They are intimately related and share the same scientific name, but look very different from each other.

The Senita looks very similar to the Organ Pipe cactus, but the senita has a dense cluster of spines near the top of mature branches.

The spines on the senita look like whiskers to some people, hence the name “Old Man.” But the name has some controversy about it. According to the Arizona-Sonora Desert Museum:

The word “senita” seems to be derived from the Spanish root meaning “old,” in which case it roughly translates as “little old woman.” This is rather descriptive of the gray-bristled mature stems. But “senita” is not a legitimate Spanish word. The Mexican name of the cactus is borrowed from the original Indian name, sina. Some feel that the Spanish vernacular name should therefore be spelled “sinita.”

Only the mature branches have the spine cluster. The senita is far more frost tolerant than the organ pipe, allowing it to survive farther north and to higher elevations. Senitas can grow to 13 feet tall. Pink, nocturnal flowers about an inch in diameter emerge through the bristles from April through August. The flowers have an unpleasant odor. If pollinated, the flowers mature into marble-sized red fruits with juicy red pulp. Native people ground the seeds of the fruit into a nutritious mush, and the pulp was boiled down to syrup. 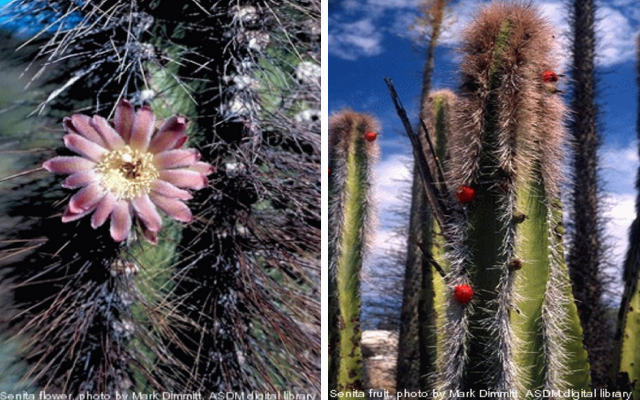 Senitas are pollinated by a moth that lives among the spines. The moth larvae survive by eating the developing fruit. This example of mutualism is similar to that of certain yuccas and their pollinating moths.

Senitas are long-lived cacti. According to an ASDM report: “When sites in Baja California photographed in 1905 were revisited in the 1990s, nearly every senita was still present.” The natural range is from extreme southern Arizona, to Sonora, and Baja California. 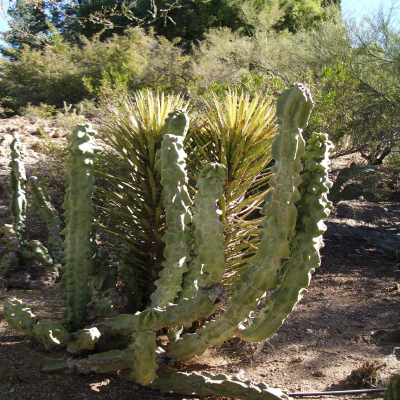 The totem pole is a spineless, bumpy cactus that developed as a natural mutation from the senita cactus. It grows naturally only in a small area of Baja California. All the totem pole cacti in a population are a single clone; it rarely flowers and cannot produce fertile seeds. It can reproduce by “pupping” from roots, and you can grow new plants simply by placing a cut branch in soil. Totem pole cacti are often used as landscaping plants. Some horticulturists warn not to touch the cactus with bare hands because skin oils will damage the cactus.

ADI articles on other desert plants: