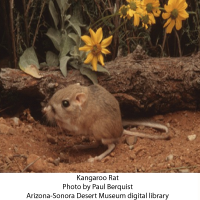 Of all the mammals in the desert, the kangaroo rat is perhaps the best adapted to arid conditions: it never needs to drink, nor eat fresh vegetation; it can metabolize water directly from dry seeds.

The kangaroo rat is 4- to 5 inches long with a tail up to 10 inches long. It prefers to hop on its hind legs. It can jump nine feet and change direction immediately upon landing, something that helps it avoid nocturnal predators. It also has a relatively large head with big eyes, small ears and external, fur-lined cheek pouches.

Its diet is almost exclusively seeds, and it prefers seeds high in carbohydrates rather than seeds high in fat or protein. That’s because metabolizing fatty seeds produces heat, and metabolizing protein-rich seeds requires more water to get rid of nitrogen-rich waste products.

The kangaroo rat stores seeds in its burrow where they absorb any humidity, thereby giving the rat some extra moisture. The kangaroo rat has no sweat glands through which to lose water.

The kangaroo rat minimizes moisture loss during respiration with its specialized nasal passages which function as counter-flow heat exchangers. These passages warm the air during inhalation, then cool the air and extract moisture during exhalation.

The kangaroo rat can conserve water by producing urine about five times more concentrated than human urine. The rat also produces very dry feces pellets with about one-fifth the water content of a white lab-rat’s pellets.

Although the rat has tiny external ears, the middle ear chambers are highly developed and each may be bigger than the braincase itself. This allows the rat to hear low intensity and low frequency sounds such as an owl flying or a rattlesnake ready to strike. This, together with its ability to jump nine feet, helps it avoid predators.

According to the Arizona-Sonora Desert Museum (ASDM), the principal habitat is open desert scrub, creosote bush flats, open grasslands and sandy places. It favors a sparse covering of grasses, interspersed with a few mesquite trees and cacti.

There are other jumping rodents in other deserts. ASDM notes: “There are many reasons why one kind of living thing may look like another. Usually it’s simply because they’re related. But sometimes an organism mimics another’s appearance, thereby deceiving an unsuspecting third party. And sometimes living things come to resemble each other by adapting in similar ways to similar habitats or ways of life — a process called convergent evolution.”

“Kangaroo rats are such perfect examples of desert adaptation that it’s perhaps not surprising nature has arrived at similar designs more than once — a wonderful example of convergent evolution. There are small jumping rodents very much like kangaroo rats in Old World deserts, including the jerboas and gerbils of Africa and Asia and certain hopping mice in Australia.”