Bats have been around for at least 50 million years and in that time have evolved to take advantage of a great variety of habitats. The more than 1,000 species live on all continents except Antarctica and occur everywhere except in polar regions and in extreme deserts. They range from the very tiny, weighing less than a penny, to giants with wingspans over 6 feet. 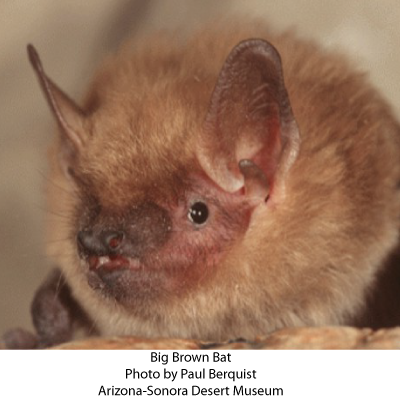 Bats come in many colors: black, white, yellow, brown, orange, red, and blue-gray. Bats are mammals and have adapted almost every mammalian feeding strategy. Some are carnivores and hunt small rodents, birds, lizards, and frogs. Some are even fishermen. Some bats are herbivores and feed on plant nectar and fruit. Other bats are insectivores and play a large part in keeping insect numbers in check. And some bats are parasites; these are the vampires that survive by feeding on blood from other animals (The vampire bats don’t suck blood, they make a small incision and lap up the blood.)

Bats are important pollinators for a variety of plants including the saguaro and other cacti. The fruit eaters help disperse the seeds. 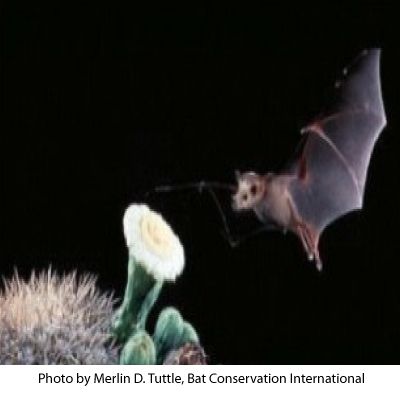 Bats can fly, maneuver, and locate insects in complete darkness due to their acute hearing and practice of echolocation. Bats emit a sound, mostly in frequencies higher than human ears can detect. That sound bounces off objects and prey, and returns to the bat. The bats judge distance by the time delay of the returning sound.

Bats live in crevices and caves, mines, under bridges, in attics or barns. Some bats hibernate, others migrate. I have a family of bats living somewhere near my house. At dusk on summer evenings, they come out and drink, on the fly, from my pool.

Bats, like other mammals, can carry rabies, which is fatal to humans. The virus is transmitted by a bite. According to the CDC, it can also be transmitted when the saliva from a rabid animal comes in contact with a person’s mouth, eyes, nose, or a fresh wound. Some studies indicate that about 5% of the bat population carry rabies. Histoplasmosis, a fungus associated with bird and bat droppings, can become airborne and inhaled. Most infections are mild and produce either no symptoms or a minor influenza-like illness. On occasion, the disease can cause high fever, blood abnormalities, pneumonia and even death. The CDC says that “research suggests that bats might be the source of several hemorrhagic fevers, which affect multiple organ systems in the body and often lead to life-threatening diseases.” They also found bats carrying the deadly Marburg virus. Bats suspected of carrying these diseases live in Africa.

Bats, themselves, are subject to disease. Recently “white nose syndrome” has killed millions of bats mainly in the northeast U.S. This disease is suspected to be a fungus.

You can find photos and fact sheets on several bats of the Sonoran Desert here. At Bat Conservation International you can find information on building bat houses and on how to safely and humanely remove a bat from your house.