Tucson suburbs often have abundant wildlife including javelinas and coyotes, the occasional black bear and mountain lion. A bobcat (Felis rufus or Lynx rufus) frequently visits my yard in search of a meal, usually doves and quail. I have encountered it in the early morning when I go out for the paper. It usually growls at me then hides behind a bush. At other times, the bobcat ignores me because it is very focused on its prey. It is very skilled at picking birds off the wall. 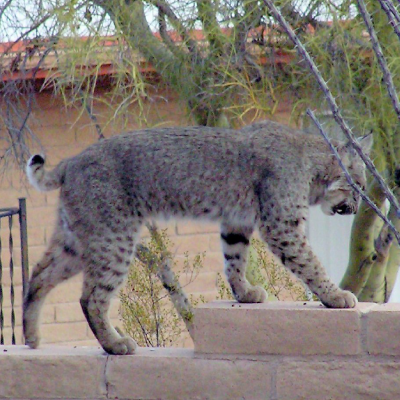 Bobcats are common in Arizona and occur in many different habitats. They especially like the outskirts of urban areas because that’s where the prey is concentrated. Adult bobcats weigh 15 to 35 pounds, males larger than females, and stand 18 to 24 inches tall (long legs make them look taller), and are 24 to 48 inches long. They can jump as high as 12 feet.

Bobcats generally hunt at dawn and dusk. During the day they may lounge in the shade of a bush in your backyard. Normal prey includes rabbits, rodents, and birds. They have been known to take down a deer. They prey upon small domestic pets, poultry, and other small livestock. They also prey upon snakes, including rattlesnakes.

Bobcats usually mate from February through March and kittens are born in April through June. The kittens stay with the mother for about a year. Normal life span is 10 to 15 years. Bobcats are generally solitary, but you may see a mating pair, or a mother and her kittens.

Bobcats generally do not attack humans, but they can inflict serious injury with their fangs and claws. You should not feed wild bobcats because that makes them too comfortable around humans. If you need to discourage a bobcat, make loud noises or use a garden hose to spray them with water. If it happens that a female has kittens in the area, then leave them alone for a few weeks until the kittens are old enough to leave with their mother.

Arizona Game & Fish department has a nice video about bobcats.