Of all the plants that inhabit the Sonoran Desert, the Boojum (Fouquieria columnaris) is perhaps the strangest looking. The boojum is endemic to central Baja California and there is a small population on the gulf coast of Sonora. I took the photo accompanying this article at the Arizona-Sonora Desert Museum (ASDM) and you can see many more photos at the ASDM digital library. 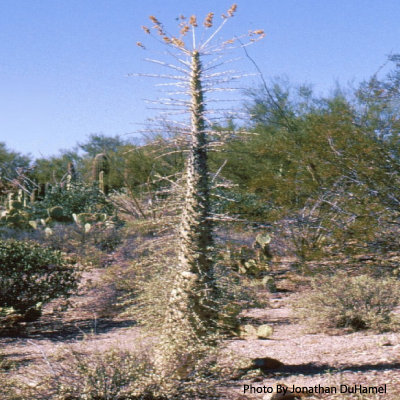 The boojum is essentially a succulent ocotillo (Fouquieria splendens) that grows during the winter and goes dormant during the summer. Boojums can commonly grow to 60 feet high. The record was one over 80 feet high.

According to ASDM, “The succulent stems produce hundreds of horizontal, non-succulent, secondary branches armed with spines. The succulent stems elongate only in late winter and spring in direct relation to the amount of moisture received. Leaves and secondary branches may sprout any time moisture is available, but the plants are usually leafless and dormant in summer. Clusters of white, fragrant flowers are borne at the tops of primary stems from July to September.”

The boojum has surprised many botanists. ASDM describes studies as follows:

” Earlier work by Robert Humphrey of the University of Arizona suggested that boojums grow only a few inches a year and that the tallest ones were up to 700 years old. But a more recent study indicates that their life spans may typically be a century or so. Of the boojums identified in photos taken in Baja California in 1905, not one was still present when the sites were revisited in the 1990s. And of those in photos taken in the 1950s, very few were still present only 40 years later. Every few decades a given boojum population experiences a direct hit from a hurricane. Boojum, cardón, and senita are especially vulnerable to high winds and suffer significant losses of large individuals from these events. The tallest known boojum was discovered by Robert Humphrey in Montevideo Canyon near Bahia de Los Angeles in the 1970s; at the time it was 81 feet tall. It grew several more feet during the next 20 years. In 1998 it and the 60 foot plus cardón next to it were gone, probably casualties of Hurricane Nora which crossed that part of the peninsula in September 1997. We could not find any boojums over 50 feet (15 m) tall in that canyon in 1998.”

“At the time of the first draft of this manuscript, we knew only that boojums are pollinated by a variety of insects. Then Steven Buchmann and colleagues at the Carl Hayden Bee Research Center completed a detailed pollination study of this species and reported a fascinating story. While this plant is indeed pollinated by a large number of insects, in each of the 20 years of study, there was a very different array of species collected in the same boojum populations in Baja California and Sonora. Many species were not seen again for several years. These pollinators may be another example of temporal niche separation. The boojums flower every year, but different insect pollinators emerge in different years in response to as yet unknown environmental cues.”

How did this plant get its name? The name is a reference to Lewis Carroll’s Hunting of the Snark. In 1922, Godfrey Sykes of the Desert Botanical Laboratory in Tucson was on an expedition near Puerto Libertad, Sonora. One afternoon he focused his telescope upon a hillside with strange plants. He is reported to have said, on the spur of the moment, “Ho, ho, a boojum, definitely a boojum.” The name stuck.