The curve-billed thrasher is a common bird in the southwest. You may recognize it from its distinctive call, a sharp and loud “whit-wheat.” It also has various non-repeating songs. Listen to recordings from the Cornell Lab of Ornithology here. (The beginning of the third recording has the distinctive call.) 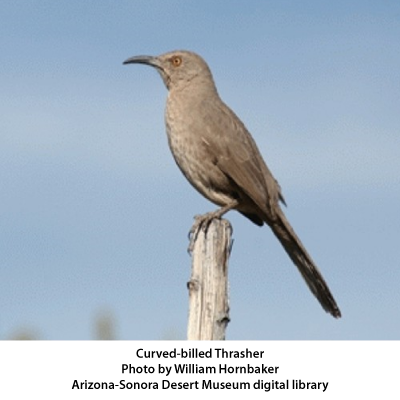 The curve-billed thrasher has a body length of just over 10 inches and a wingspan of 13 inches. It lives southern Arizona, southern New Mexico, south Texas, and Mexico. According to Cornell, “The Curve-billed Thrasher that lives in the Sonoran Desert of Arizona and northwestern Mexico looks different than [sic] the form that lives in the Chihuahuan Desert of Texas and central Mexico, and they may be separate species. The Texas and eastern bird has a lighter breast, more contrasting spots, pale wingbars, and white tail corners. The more western form has a grayer breast with less obvious spots, inconspicuous wingbars, and smaller, more grayish tail corners.”

These birds eat mainly insects, fruit, berries, and seeds. They forage on the ground using their bills to flick aside debris and dig in the soil, hence the name “thrasher.”

According to the Arizona-Sonora Desert Museum, “Curve-billed Thrasher nesting begins in mid-March to early April. The nest, a loose cup of thorny twigs, is built 3 to 5 feet above the ground in cholla, yucca, or mesquite. It lays two to four turquoise-colored eggs that are incubated for twelve to fifteen days. The altricial young leave the nest at fourteen to eighteen days. Curve-billed Thrashers may tear apart Cactus Wren nests when good nesting sites are at a premium.”

Curve-billed thrashers have adapted well to growing human population and even thrive in cities.

There are three other thrashers in the southwest, but the curve-billed thrasher has the largest range. Cornell notes the other three thrashers:

Bendire’s Thrasher has shorter, straighter bill with a pale area at the base, finer, more triangular spots on breast, and yellower eyes. Juvenile Curved-bill Thrasher may have yellow eyes and straighter bill.

Crissal Thrasher has plain breast and dark rusty under the tail.

California Thrasher has a plain reddish brown underside and dark eyes, and there is very little range overlap with the Curve-billed Thrasher. 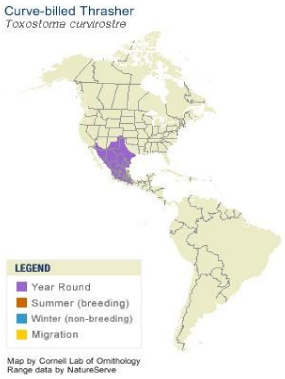