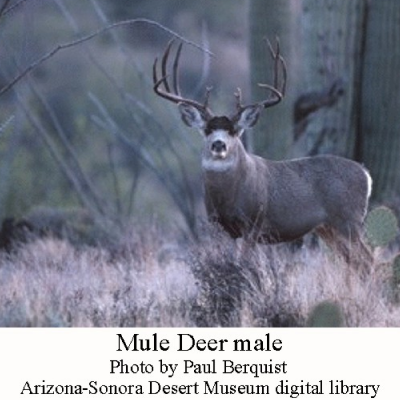 At a distance the two deer can be distinguished by the way they run. Mule deer bounce along with all four feet hitting and leaving the ground at the same time. White-tailed deer spring from hind legs to forelegs.

“The mule deer gets its name from its large ears. Coat color is reddish-brown in summer, turning to a blue-gray in winter. Its forehead is much darker than its face, while its throat, belly and inner leg are white. Mule deer have white rump patches and short, narrow, black-tipped white tails.”

The White-tailed deer’s “Coat color is grayish-brown salt-and-pepper with white underparts; the face is marked with white ‘halos’ around the eyes and a white band across the muzzle. The most distinguishing characteristic of the whitetail is its long, broad tail. The tail is all white on the underside, gray to reddish-black on top, and is often carried high as an alarm signal.” (Arizona Game & Fish). 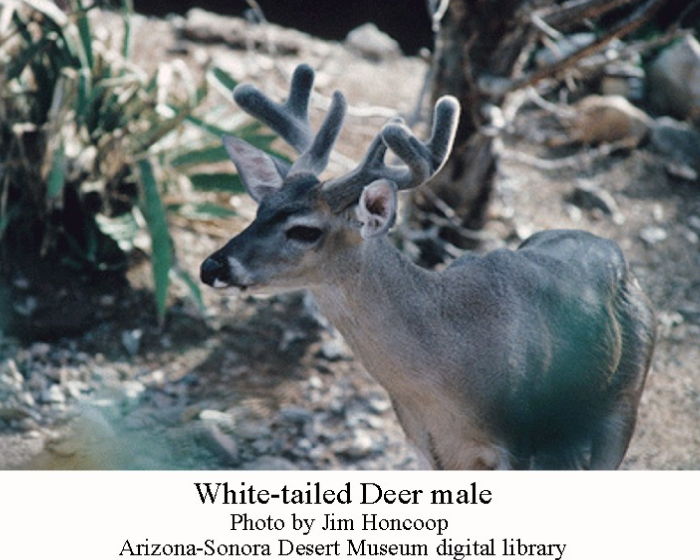 Both deer are browsers of woody plants. They favor mesquite leaves and beans, catclaw, jojoba, buckbrush, and fairy duster, and graze on a variety of forbes and grasses.

The bucks of both deer grown antlers which are initially covered by a highly vascular skin called “velvet.” As the antlers mature, the velvet is sloughed off exposing the bony antler.

Mule deer breed in late fall and winter. Young are born in spring and summer and are spotted to provide camouflage. White-tailed deer breed in early winter with the fawns born in summer. They, too, are spotted.

If you happen upon a fawn while out hiking, leave it alone. Don’t try to “rescue” it. Female deer commonly hide fawns while they browse, then return to nurse them.