After a private meeting between Larry Hecker, Carolyn Campbell, and Chuck Huckelberry, the Pima County Bond Advisory Committee was given a marked up version of a bond proposal to consider on Friday morning.

According to sources, some members of the board were upset that the three went behind close doors without consulting with the rest of the committee and decided to just make the cuts they felt were best. However, after much confusion, the bond committee approved a bond package that could reach up to $640 million.

The proposal, which had grown to over $800 million before Huckelberry’s panicked trim on Friday, could be presented to the Pima County Board of Supervisors in the near future. If accepted by the supervisors, it would go before voters in the November 2015 General Election.

According to Huckelberry’s memo, “the single largest property tax payer by class for County bonded indebtedness is the residential property class paying 65 percent of total bond repayment property taxes. Of the residential distribution of net assessed value by jurisdiction in 2015, taxpayers in the unincorporated area continue to pay the most in bond debt repayment at 47 percent of the total residential value, with the City of Tucson following at 35 percent.”

The current voluntary secondary property tax cap is set at 81.5 cents and the current total secondary rate is 77 cents per $100 or assessed property value. As a result, it is difficult to imagine how the County would be able to maintain the cap.

Campbell later expressed her displeasure that the $130 million for open space was slashed to a mere $95 million.

According to the Green Valley News, Huckelberry may not have the support of a majority of the supervisors for his scheme. Facing re-election bids, the recent revelations of their use of public funds for private charities have put the supervisors at risk of losing office. A pork loaded bond measure would not serve their re-election bids.

As far as elections go, money for new election equipment mysteriously disappeared from the proposal. Ironically, ever since the RTA bond election, Pima County elections have been shrouded in doubt.

Still, the pork projects are what Huckelberry is counting on. From Marana to Green Valley, every community has small pet projects that might prove too tempting for the communities in decay. 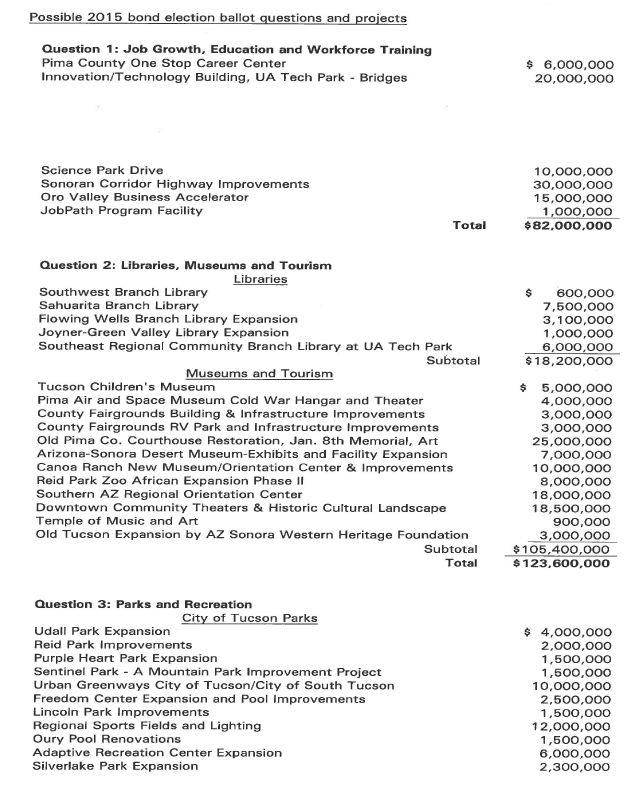 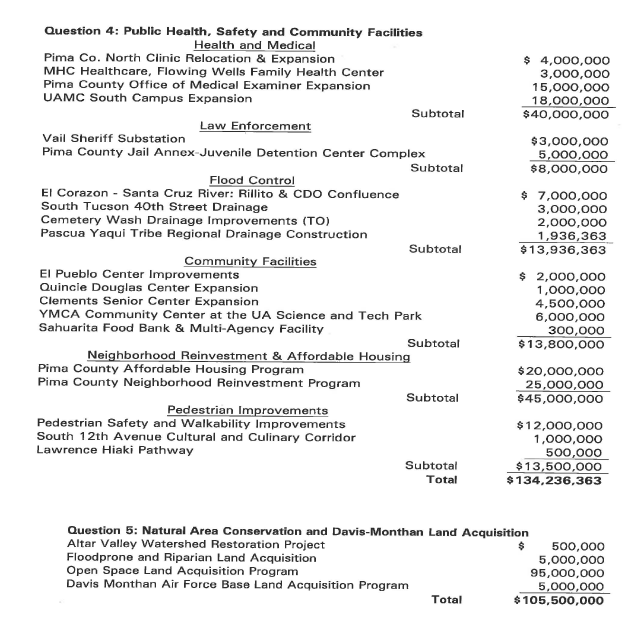