There is some debate about whether an ice-free Arctic Ocean would be a good thing or a bad thing. On the good side is that an ice-free Arctic Ocean would allow faster shipping of goods between continents and open the area for mineral exploration. On the allegedly bad side is that the albedo of the Arctic Ocean would decrease and thereby absorb more sunlight that might cause warming. The sea level issue is moot because floating ice displaces it own weight of water and there is only a minor difference between the mass/volume of salt water versus fresh water, so sea level rise would be minimal.

Let’s look at some recent melting Arctic predictions in the press.

The BBC’s 2007 report quoted scientist Professor Wieslaw Maslowski, who based his views on super-computer models and the fact that ‘we use a high-resolution regional model for the Arctic Ocean and sea ice’. This story was within a more rational story in the Daily Mail.

Because of the large ice melt in 2007, Mark Serreze, of the US National Snow and Ice Data Center (NSIDC) said “This raises the spectre – the possibility that you could become ice free at the North Pole this year.”

“”For the record—I do not think that any sea ice will survive this summer. An event unprecedented in human history is today, this very moment, transpiring in the Arctic Ocean.”

“The ice-packed Arctic Ocean may become navigable in another 25 to 50 years if the present warming-up tendency of the polar region continued.”

“The Arctic Ocean will be open year-round before the end of the twentieth Century.”

“Washington (AP) -Arctic specialist Bernt Balchen says a general warming trend over the North Pole is melting the polar ice cap and may produce an ice-free Arctic Ocean by the year 2000.”

“This week, after reviewing his own new data, NASA climate scientist Jay Zwally said: “At this rate, the Arctic Ocean could be nearly ice-free at the end of summer by 2012, much faster than previous predictions.”

Article by then Senator John Kerry in which he claims:

“The truth is that the threat we face is not an abstract concern for the future. It is already upon us and its effects are being felt worldwide, right now. Scientists project that the Arctic will be ice-free in the summer of 2013. Not in 2050, but four years from now.”

“Senior US government officials are to be briefed at the White House this week on the danger of an ice-free Arctic in the summer within two years.” We will just have to see if the Arctic becomes ice-free this summer.

Now that previous predictions of an ice-free Arctic Ocean have failed to materialize, the alarmists are extending their wolf cry to predict it will happen in 2030 or 2050 etc.

Such are the predictions of “climate scientists” for whom, it seems, computer models are their reality.

Arctic sea ice melt is nothing new. To put things in perspective, consider these older reports:

“A considerable change of climate inexplicable at present to us must have taken place in the Circumpolar Regions, by which the severity of the cold that has for centuries past enclosed the seas in the high northern latitudes in an impenetrable barrier of ice has been, during the last two years, greatly abated.”

“2000 square leagues [approximately 14,000 square miles or 36,000 square kilometers] of ice with which the Greenland Seas between the latitudes of 74 and 80 N have been hitherto covered, has in the last two years entirely disappeared.”

The paragraphs above come from a letter by the President of the Royal Society addressed to the British Admiralty, written in 1817 (Royal Society, London. Nov. 20, 1817. Minutes of Council, Vol. 8. pp.149-153). When this report was written, the planet was in the midst of the Little Ice Age. How could the ice disappear in a Little Ice Age if the melting was due to global warming?

The Arctic ocean is warming up, icebergs are growing scarcer and in some places the seals are finding the waters too hot, according to a report to the Commerce Department yesterday from Consul Ifft, at Bergen , Norway .

Reports from fishermen, seal hunters and explorers, he declared, all point to a radical change in climatic conditions and hitherto unheard-of temperatures in the Arctic zone. Exploration expeditions report that scarcely any ice has been met with as far north as 81 degrees 29 minutes. Soundings to a depth of 3,100 meters showed the gulf stream still very warm.

Great masses of ice have been replaced by moraines of earth and stones, the report continued, while at many points well known glaciers have entirely disappeared. Very few seals and no white fish are being found in the eastern Arctic, while vast shoals of herring and smelts, which have never before ventured so far north, are being encountered in the old seal fishing grounds.

This is from an AP story which appeared in the Washington Post, November 2, 1922.

It seems that “predictions are hard, especially about the future.” – attributed to the great philosopher Yogi Berra.

To keep track of ice cover in both the Arctic and Antarctic, visit http://arctic.atmos.uiuc.edu/cryosphere/ 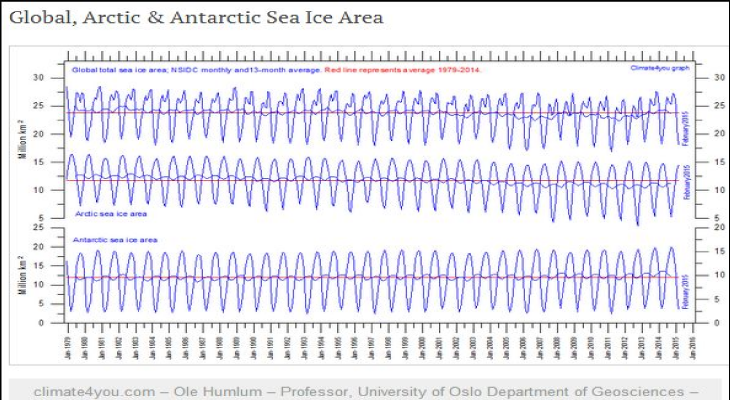