”Wildlife Crossings Underway on Oracle Road: Thanks to you, animals big and small will soon be able to cross this busy highway safely!” – Coalition for Sonoran Desert Protection

To be more precise, thanks to the taxpayers of Pima County who voted “yes” in the $2.1 billion 2006 Pima County Regional Transportation Authority (RTA) election.

“The structures are incorporated into the ADOT widening project of Oracle Road from Tangerine Road to the Pinal County line. On March 8th, traffic on Oracle Road switched to the northbound lanes for four months so work can be done on the west side of the crossing structures. A third lane will also be paved,” according to the recent public relations material created by the Coalition for Sonoran Desert Protection. “Totaling $11 million, these structures are paid for by voter approved funds from the Regional Transportation Authority (RTA).”

As part of that approval, county voters specifically ear-marked $45 million to be used to incorporate wildlife linkage conservation into transportation projects. Over the 20-year timeframe of the RTA, these funds will mitigate barriers to wildlife movement and reduce wildlife-vehicle collisions.

RTA projects have been successful in coordinating with broader efforts to facilitate wildlife movement. For example, in 2009, two significant events occurred—the Town of Oro Valley incorporated an important wildlife linkage (Beier et al. 2006d) through the Arroyo Grande planning area as an amendment to its General Plan (Town of Oro Valley 2008); and the RTA approved the funding to construct one overpass and two underpasses as part of the Arizona Department of Transportation’s improvement to State Route 77 near the Arroyo Grande planning area (Regional Transportation Authority 2011, Figure 3a). In addition, a project proposed by the Tohono O’odham Nation and supported by data from the Arizona Wildlife Linkages Assessment gained final approval for RTA funding in December 2011. Through this funding, one overpass and two underpasses will be built over State Route 86 near Kitt Peak.

In an article in Slate.com, What Animals Don’t Need, by Fred Pearce notes that “Paul Beier, a veteran conservation biologist from North Arizona University at Flagstaff, and his colleague Andrew Gregory, warned that “despite much research, there is little evidence that conservation corridors work as intended.”

In his article, that originally appeared in New Scientist, Pearce notes:

“Other studies have shown that conservation corridors work. But most have looked at short corridors of 100 meters or so through largely natural landscape. “Just because species can use and travel along short corridors in a natural setting does not mean that they will be successful dispersing along much longer corridors embedded in a large, heavily impacted landscape,” says Gregory. “

Surely any corridor is better than none? But consider this. The edges of wild areas are known danger zones for wildlife, where predators and diseases may invade. Linking two existing protected areas with a long narrow corridor may expose it to greater danger along these edges. Unless the benefit exceeds the threat, then there is serious potential to do harm.

Pearce concludes, “Gregory and Beier do not dismiss corridors altogether. They believe they can still work, if designed properly. The problem is, we don’t really know what that means.”

The Coalition will begin work on the “re-vegetation project at the Santa Catalina Catholic Church property, which abuts the overpass to the south. The church and the Coalition, with member groups Sky Island Alliance and Tucson Audubon Society, are working together on this project. The result will be vegetated screening between the church parking lot and the overpass.”

The group claims that “creating an important vegetated screen between the parking lot of the Santa Catalina Catholic Church and the wildlife bridge “will shield wildlife moving towards the overpass from noise, lights, and other human impacts.” 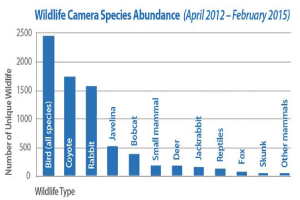 According to the group’s own data, the need for the bridges is questionable. Between April 2012 and February 2015, their wildlife cameras captured mostly bird activity.

The group, headed-up by environmentalist Carolyn Campbell is now advocating for more money with the passage of the 2016 Pima County bond election. Campbell, who has represented Supervisor Richard Elias on the Pima County Bond Advisory Committee for thirteen years, says that the Committee began developing a comprehensive bond package to present to the voters in 2008. “Yet, 2008 experienced a global economic decline so severe that it has been commonly referred to as the Great Recession,” writes Campbell. “Because of that, the bond package development evolved from a 2-year into a 9-year process,” and will include $95 million more for open space.

But, what’s 9 years to a group of people who are relentless in their pursuit of more money and land. The County had tried to pass the RTA measure, which had failed “four times previously and was far behind in pre-election polls,” but “succeeded in 2006 because of fraud,” according to the Arizona Republic.

After the fraud was revealed in a hearing in a Maricopa County Superior Court, County officials promised they wouldn’t cheat again. In a request to an appellate court to reconsider its ruling, Pima County described the rigging of the RTA election as “a discrete incident of past wrongdoing.”