The Steller’s Jay (Cyanocitta stelleri) is the largest of the Jays. It ranges from British Columbia, through the Rocky Mountains and into Mexico. It is most commonly found in evergreen forests from 3,000- to 10,000 feet of elevation. In the southwestern U.S. and Mexico it also inhabits arid pine-oak woodlands.

These birds have a body length of 11- to 13 inches and a wingspan of 17 inches, making them slightly larger than a scrub jay. This crested bird has a dark gray head, neck and back, and a blue body. There may be inconspicuous white streaks above the eyes and on the forehead. (See

The Cornell Lab of Ornithology notes that “Like other jays, Steller’s Jays are bold, inquisitive, intelligent, and noisy. Steller’s Jays spend much of their time exploring the forest canopy, flying with patient wingbeats. They come to the forest floor to investigate visitors and look for food, moving with decisive hops of their long legs.”

Cornell also notes: “Steller’s Jays have the dubious honor of being one of the most frequently misspelled names in all of bird watching. Up close, the bird’s dazzling mix of azure and blue is certainly stellar, but that’s not how you spell their name. Steller’s Jays were discovered on an Alaskan island in 1741 by Georg Steller, a naturalist on a Russian explorer’s ship. When a scientist officially described the species, in 1788, they named it after him – along with other discoveries including the Steller’s sea lion and Steller’s Sea-Eagle.”

The Steller’s Jay shows a great deal of variation in appearance throughout its range, with some populations featuring black crests and backs, and others blue. One black-crested form in southern Mexico is surrounded by eight other blue-crested forms.

They may mimic the screams of hawks and Golden Eagles. When they are mellow, females make rattling sounds, while males may make “gleep” sounds. They also have a variety of loud, raucous calls that are repeated in patterns of three.

They feed mainly on acorns and pine seeds, but will raid other bird’s nests for eggs and nestlings. They also will eat small reptiles, nuts, berries, fruits, and insects. You might see them pounding on hard seeds and nuts with their beaks to order to open them. They have distendable esophagi that are able to carry acorns and nuts. These foods are often cached for the winter or saved for eating at a later time. They are carefully covered and hidden. Steller’s Jays are often found in campgrounds cleaning up the goodies left by campers!

The wing beats of these jays are below the horizontal line when they fly, and the crest on their heads lays flat while they are in flight. They are known to work together to mob predators to protect their young. (Source)

In courtship, male feeds female. Adults are quiet and secretive while nesting, but become noisy and aggressive if nest is threatened. Nest site is in tree, usually coniferous; sometimes in deciduous tree or shrub. Nest (built by both sexes) is a bulky ragged cup of twigs, weeds, moss, dry leaves, cemented together with mud and lined with fine grass, rootlets, and pine needles. Bits of paper often added to nest. 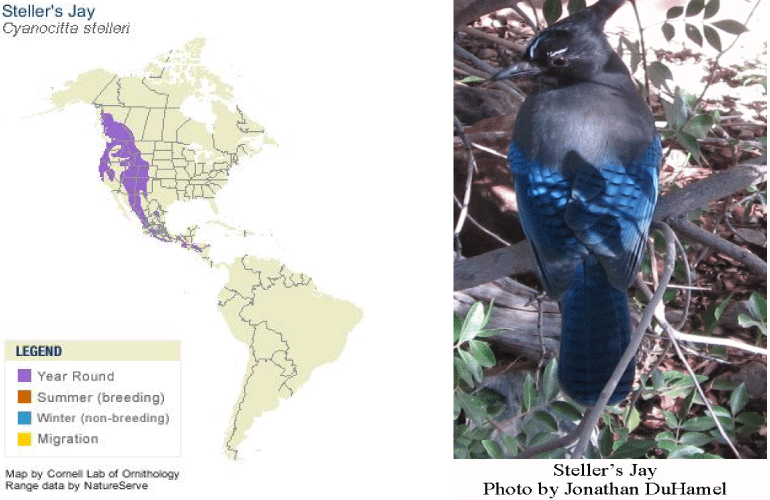 The female lays three to five bluish-green eggs that are spotted with brown or olive. Eggs hatch in about 18 days and nestlings fledge in about three weeks. Both male and female bring food to the nest.

The male and female form a monogamous pair which stay together year round.

You can listen to songs and calls of the Steller’s Jay from Cornell here.

Cornell says you can attract these Jays to your backyard feeder by putting out peanuts or other large seeds. Cornell also says that these Jays are excellent mimics with a large repertoire. They can imitate birds, squirrels, cats, dogs, chickens, and some mechanical objects.

I took the photos for this article in the aviary of the Arizona-Sonora Desert Museum. The Steller’s Jay there was very interested in my shoelaces. He tried to pull them out several times. 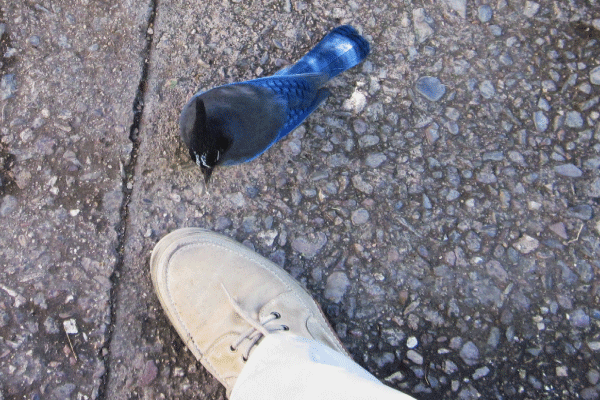