There are eleven recluse spiders in the U.S. and Arizona has five of them. The various species and their range are shown on the map below:

The Arizona brown spider has a body length of about 1/3 inch and a leg span of 1 to 1.5 inches.

Recluse spiders have six eyes arranged in three pairs. Most other spiders have eight eyes. You will need a magnifying glass for the count.

Other distinguishing characteristics of recluse spiders:

Brown recluse spiders have uniformly light-colored legs – no stripes, no bands. They have a uniformly-colored abdomen which can vary from cream to dark brown depending on what it has eaten; however, it will never have two colors of pigment at the same time. They do not have spines on the legs, only fine hairs. Recluse spiders make small retreat webs behind objects, never out in the open. (Source)

Bites from recluse spiders, including the Arizona brown spider, can produce necrosis (tissue death). Fatalities are uncommon. You can see some rather graphic photos of spider bite necrosis here. Reaction to spider bites vary with the individual and some people have just a little red mark.

“A trapping spider, the brown spider catches insects and other invertebrates in sticky, irregular webs spun beneath rocks and debris. The bite of this spider is potentially dangerous to humans: reportedly some have suffered amputation and even death as the result of bites. Although sometimes the bite causes little harm, the most common reaction is a spreading sore at the site of the bite, which, if untreated, may result in permanent tissue damage. Those who suspect a brown spider bite should see a physician.” Read more

According to the University of California (Davis):

Recluse spiders, as their name implies, are reclusive. These nocturnal spiders emerge from their retreats at night and actively hunt down prey or may wait for prey to land in the small area several inches from their retreat. Although they do not build webs to capture prey, they do use silk to build a retreat in which they hide during the day. As dawn approaches, they may seek shelter in dark places such as in clothing or shoes. Also, mature males roam in search of females. It is these two behaviors that can bring them into contact with people. 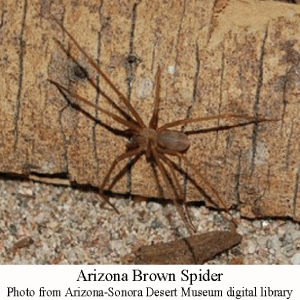 In nature, recluses are found in cracks and crevices in and under rocks. Recluses have very much benefited from human-altered environments where they are readily found under trash cans, plywood, tarps, or rubber tires, in boxes, etc. They are synanthropic (found in association with humans) and therefore are considered “house” spiders. In fact, in South America the recluse species have common names that translate as “the spider behind the picture” or “the spider in the corner.”

Recluse spiders are relatively long lived. Among the various species, they mature after about 1 year and average a 2- to 4-year life span with some living more than 7 years under laboratory conditions. They are also well known for surviving long periods (6–12 months) without food before perishing.

One consistent life history characteristic of recluse spiders is that in the right environment their populations are usually dense.

UC Davis also notes that there are many kinds of harmless spiders that people mistake for recluse spiders. Read more

The Arizona brown spider resides in cinder block wall crevices, scraps of dead wood, wall voids, attics, dead cactus, packrat nests, wood piles, and in clothing that has been left on the floor.