The Cardon is not as frost tolerant as the Saguaro. That is why it does not grow naturally in Arizona. The photo above shows a Saguaro on the right and a Cardon on the left. This photo was taken at the Arizona-Sonora Desert Museum and you can see that the Cardon shows frost damage. See more photos from Google images. 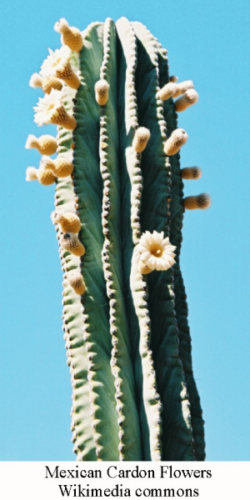 “The Cardón resembles the Saguaro in growth form but it is much more massive. It develops a very thick trunk and the branches are closer to the ground and often more numerous than those of a typical Saguaro. In sheltered locations plants may exceed 60 feet tall. Young stems are armed with stout spines; mature stems are nearly spineless and have bluish epidermis between the rows of closely-spaced felty areoles on the external ribs. The flowers are similar to those of a Saguaro, but with more and narrower tepals. The ovoid fruits are densely covered with felty areoles; on different plants they range from spineless to very long-spiny. The juicy pulp of ripe fruits ranges from white to red and contains large, hard seeds—very different from the tiny seeds of the Saguaro.”

The ribs of the Cardon are generally fewer and more widely-spaced compared to a Saguaro.

Saguaro flowers occur mainly at the top of the trunk and arms. Cardon flowers may extend down the sides of the stems. Flowers of both cacti are large, white, and pollinated mainly by bats. The flowers of both cacti open at night and stay open for about 18 hours. The Saguaro has the edge in pollination because its flowers produce a second batch of nectar in the morning for birds and insects. As a result, about 70% of Saguaro flowers set fruit versus only 30% for the Cardon flowers. 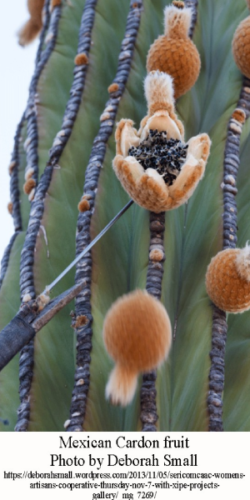 Cardon fruit was an important food for the Seri people in Sonora, who call the cactus xaasj.

The flesh of this cactus contains alkaloids, and may have been used as a psychoactive plant in Mexico according to Wikipedia which also notes: “A symbiotic relationship with bacterial and fungal colonies on its roots allows P. pringlei to grow on bare rock even where no soil is available at all, as the bacteria can fix nitrogen from the air and break down the rock to produce nutrients. The cactus even packages symbiotic bacteria in with its seeds.”

Saguaros have a life span of about 200 years, whereas Cardons can live 300 years (Source).

There is another cactus called “Cardon.” This one lives mainly in Argentina and is frost tolerant as is the Saguaro. 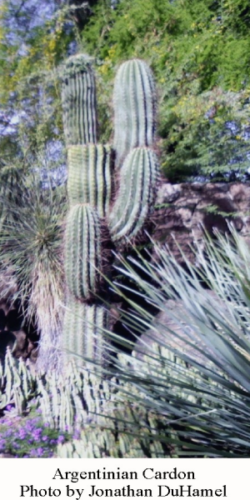 The Argentinian cardon (Trichocereus pasacana) is “A robust, Saguaro-like, South American columnar cactus, this differs from its North American counterpart in its denser, more bristly spination and less [sic] branched stems. These are stout, to 1′ in diameter, to 30′ or more tall, branching and candelabriform only in age. Like the Saguaro (Carnegiea gigantea) in the Sonoran Desert, T. pasacana is a dominant component of the vegetation in many habitats in northern Argentina and southern Bolivia, where it can form nearly homogeneous stands.” (Source)

A specimen of the Argentinian Cardon may be seen at the Arizona-Sonoran Desert Museum near the art gallery.

Army Veteran Loses Appeal Of Over 15 Year Sentence For $7,000 Theft