Once again Pima County Attorney Barbara LaWall is denying voters an opportunity to hear from both her and fellow Democratic candidate Joel Feinman in a public forum. LaWall is refusing to participate in the June 20, Tucson Interdenominational Ministerial Alliance candidate forum.

The organization of African-American clergy, Tucson Interdenominational Ministerial Alliance (IMA), is holding the event on Monday, at 5:30 p.m. at the Dunbar Pavilion at 325 West 2nd Street in Tucson.

LaWall has refused to attend without explanation.

LaWall has also yet to offer an explanation for the highly questionable spending practices by her office of RICO funds. A cursory recent review of those funds show a disturbing pattern of pushing the bounds that constrain the use of those monies. For example, in November 2015, LaWall approved a transfer of RICO funds in the amount of $2,000 to the Greater Tucson Leadership group to fund a retirement party of sorts for former Sheriff Clarence Dupnik.

However, it might be the use of RICO funds for promotional materials that is really raising eyebrows and questions. From the period July 2015 to March 2016, LaWall’s office spent nearly $13,000 on custom printed pens, pencils, and other miscellany:

** Each Item was described as “Custom Printed” 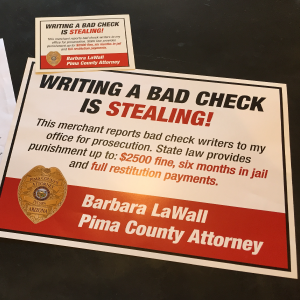 According to the Arizona State Government’s General Accounting Office (GAO), the Pima County Attorney’s Bad Check Special Revenue Fund earned $20,821.22 during fiscal year 2015 (see attached image “bad check revenue”). However, that same fund had expenses of $35,887.33 during the same period, operating at a loss of $15,066.11 (see attached image “bad check expenses”). Where did that money go? Well, thousands of dollars went to send out promotional material to 4,023 local businesses.

In February 2016, LaWall mailed a full-color cash register decal and a 11 x 14 inch full-color window placard to those businesses, along with a letter asking the owners to, “Please post prominently in your place of business.” Both the decal and the placard prominently feature Ms. LaWall’s name, title, and official law enforcement badge.  The Pima County Attorney’s Office cannot tell the public how much taxpayer money was spent producing this mailer because those records have been destroyed. However the mailer cost $5,712.66 to send – at least $5,356.76 of which came from the Bad Check Special Revenue Fund.