Earth’s climate has been changing for at least four billion years in cycles large and small. Few in the climate debate understand those changes and their causes. Many are fixated on carbon dioxide (CO2), a minor constituent of the atmosphere,  but one absolutely necessary for life as we know it. Perhaps this fixation derives from ulterior political motives for controlling the global economy. For others, the true believers, perhaps this fixation derives from ignorance. 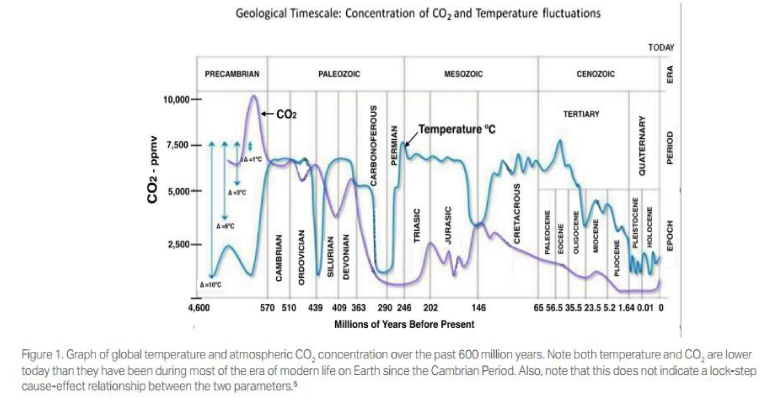 Greenpeace co-founder Dr. Patrick Moore has written an excellent summary of the history of carbon dioxide  on Earth titled, “The Positive Impact of Human CO2 Emissions On the Survival of Life on Earth.”  In this 24-page paper, Moore notes that we came dangerously close to losing plant life on Earth about 18,000 years ago, when CO2 levels approached 150 ppm, below which plant life can’t sustain photosynthesis. Currently, atmospheric CO2 stands at about 400 ppm which is about one-third the level for optimum plant growth.

Here is the executive summary of Moore’s paper:

This study looks at the positive environmental effects of carbon dioxide (CO2) emissions, a topic which has been well established in the scientific literature but which is far too often ignored in the current discussions about climate change policy. All life is carbon based and the primary source of this carbon is the CO2 in the global atmosphere. As recently as 18,000 years ago, at the height of the most recent major glaciation, CO2 dipped to its lowest level in recorded history at 180 ppm, low enough to stunt plant growth.

This is only 30 ppm above a level that would result in the death of plants due to CO2 starvation. It is calculated that if the decline in CO2 levels were to continue at the same rate as it has over the past 140 million years, life on Earth would begin to die as soon as two million years from now and would slowly perish almost entirely as carbon continued to be lost to the deep ocean sediments. The combustion of fossil fuels for energy to power human civilization has reversed the downward trend in CO2 and promises to bring it back to levels that are likely to foster a considerable increase in the growth rate and biomass of plants, including food crops and trees. Human emissions of CO2 have restored a balance to the global carbon cycle, thereby ensuring the long-term continuation of life on Earth.

Moore presents a concise history of CO2 beginning in the Cambrian Period 540 million years ago when CO2 was about 7,000 ppm.  He follows that with a discussion of how carbon is distributed today between the atmosphere, oceans, plant life, and rocks.

In his concluding remarks, Moore briefly discusses the politics of CO2 and notes: “ Lost in all these machinations is the indisputable fact that the most important thing about CO2 is that it is essential for all life on Earth and that before humans began to burn fossil fuels, the atmospheric concentration of CO2 was heading in a very dangerous direction for a very long time.”

There is no physical evidence that our CO2 emissions from burning fossil fuels will produce catastrophic climate change. Moore asks, “Given that the optimum CO2 level for plant growth is above 1,000 ppm and that CO2 has been above that level for most of the history of life, what sense does it make to call for a reduction in the level of CO2 in the absence of evidence of catastrophic climate change?”

Also of interest is a 40-page paper published by the Canadian Friends of Science Society entitled “A Confluence of Carbonbaggers.” – great title.  Here is part of the executive summary:

Given that in most industries, margins of error are required to be small, this paper reviews the substantial failings of the IPCC in everything from the original premise that human activity producing greenhouse gases was the primary cause of recent warming, to vast statistical errors in climate models that are 500 and 600% off trend.

Few average citizens have any knowledge of these goings on – despite the fact that billions of their tax dollars are vanishing every year on causes proclaimed by this august organization and echoed around the world by enthusiastic Environmental Non-Governmental Organizations (ENGOs) who find climate catastrophe predictions the easiest way to raise money to ‘save the planet’ – all the while demonizing traditional industries that have provided jobs, energy and resources that have created our modern, industrialized world.

This report is a compilation of errors, false and wildly exaggerated predictions, and the IPCC’s claim that it in fact ‘makes no recommendation of any kind on any topic’ – effectively washing its hands of responsibility for the damage its reports and meetings have done in the Western world. National economies have been ruined, investment markets distorted, industries devastated, thousands have died prematurely due to sharp rise in power prices across the UK and Europe as the poor and middle class have been pushed into ‘heat-or-eat’ poverty – and yet governments still persist in designing faulty climate and economic policies based on flawed documents from the IPCC – cited as ‘the authority on climate change.’

See also: Evidence that CO2 emissions do not intensify the greenhouse effect
Celebrate Earth Day by tripling your carbon footprint

Note to readers:
Index with links to all my ADI articles: http://wp.me/P3SUNp-1pi