In November 2016, after Governor Doug Ducey forced the resignation of Department of Economic Security director Tim Jeffries, he ordered an investigation into allegations that the Department had been stockpiling weapons and ammunition. While the report was completed in February, it has still not been made available to the public.

After two months, and several requests for the document, on April 5, the Arizona Department of Public Safety and the Department of Economic Security received a letter from an attorney on behalf of the Arizona Daily Independent demanding that the report be turned over. Specifically, Phoenix attorney Chuck Johnson wrote in part:

On February 24, Officer Mehr informed my client, the Arizona Daily Independent, that the DPS report on the Department of Economic Security was “complete and in the process of being reviewed. Once reviewed the report will be turned over to DES.”

My client’s request for this document is now months old. It is my understanding that this investigation is not a criminal investigation. Therefore, there is no legal basis for refusing to turn the document over in a timely fashion.

The report is expected to vindicate Jeffries and his team: Chief Accountability Officer Judge Juan Arcellana, Chief Human Resources Officer Morris Greenidge and Security Operations Administrator Charles Loftus. The report is also expected to be embarrassing for the governor and his Chief of Staff Kirk Adams, who is alleged to be behind the false report that forced Jeffries and his team to be escorted by DPS SWAT personnel from the DES headquarters a day before last Thanksgiving.

According to numerous reliable sources, the governor had planned to replace Jeffries with former lawmaker, and current DES employee Leah Landrum Taylor. Now, it appears that he will install Deputy Director for Operations at the Arizona Department of Economic Security Jim Hillyard as the director.

Hillyard served as DES director for a short time after Ducey accepted the resignation of former director Clarence Carter, according to Arizona Capitol Reports. Hillyard then served as the Deputy Director for Operations under Jeffries until questions arose regarding unusual purchasing practices which included 66 pallets of unused Cisco switches worth millions of dollars that had to eventually be scrapped.

If the report is complete

In response to the deadly attack by Muslim extremists on San Bernardino government offices, Arcellana and his team began making security changes at DES offices across the state. While that shooting prompted government officials across the country to review their security procedures, DES office had been plagued with security issues for years.

Arcellana relied on law enforcement expert Loftus to get the job done. Loftus had left the Arizona Attorney General’s office to take the job at DES. An expert in counter-terrorism, Loftus, began taking measures to keep both staff and clientele safe.

Contrary to some news reports, Loftus was not creating an armed cult-like force. If anything, Loftus was conservative in the steps he took, based on incident reports file by DES offices.

If the DPS report is a complete investigation it will include multiple incident reports in which staff and clientele were at risk. From staff reporting trips-and-falls to one male of Middle Eastern descent threatening everyone from DES staff to President Obama, the reports show the difficulties DES clients face and the danger in which employees find themselves.

A sampling of incident reports from DES offices across the state: 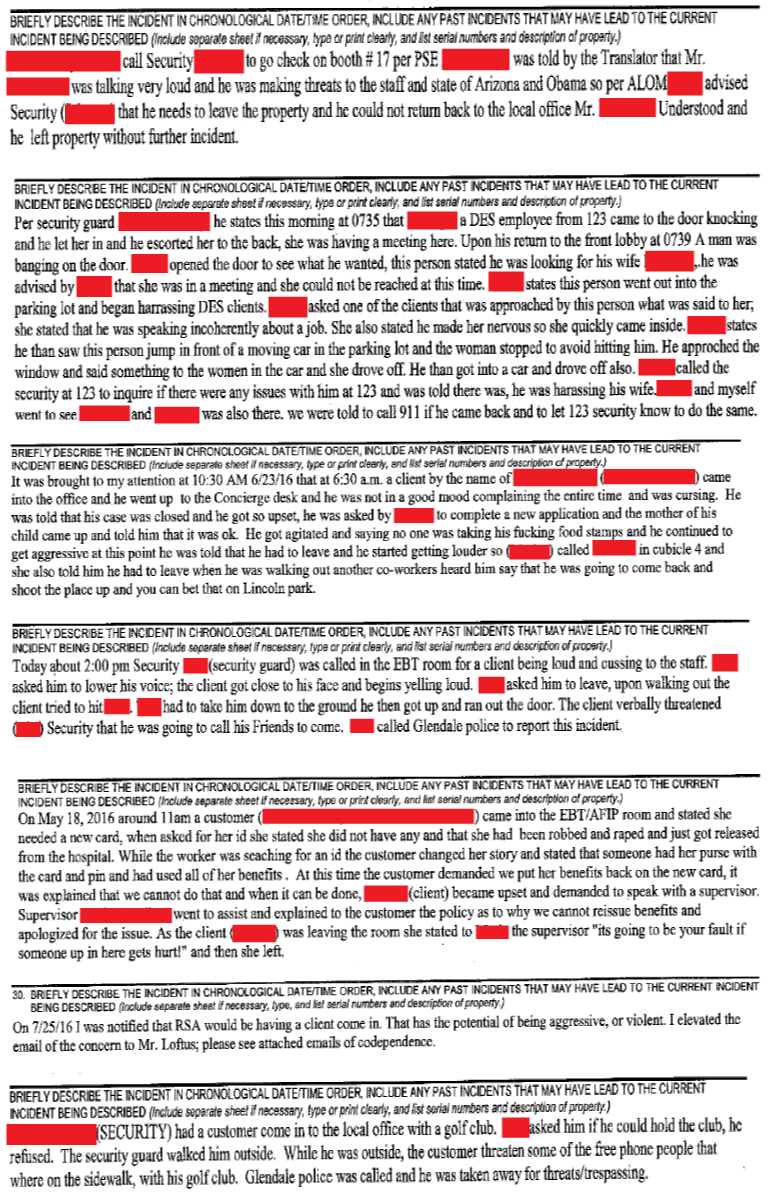