On behalf of the Avra Valley Coalition

As part of a three-year, $15 million Tier 1 Environmental Impact Study to identify a “preferred alternative” route for Interstate 11 in Southern Arizona, a second round of public meetings has been set for early May.  Unfortunately the Arizona Department of Transportation is not getting the word out very well.  A news release along with emails to those who signed up for notification was finally issued just 12 days before the first of six meetings, with study materials – presumably the alternative routes – to be made public over a week later.

The announcements came two weeks after the Avra Valley Coalition and Coalition for Sonoran Desert Protection alerted supporters to the upcoming meetings, notice of which had been posted quietly on the i11study.com website the week before.  It seems that ADOT  really doesn’t want the public at these public meetings.  Sources tell us that ADOT met with “cooperating partners” to boost a pro-I-11 turnout to the meetings weeks before going public.

Reports are that the ADOT planners have come up with three possible I-11 routes in Southern Arizona, one along the existing I-10 corridor, and two through the Avra Valley.  The maps and routes will be released online April 28 at i11study.com.  The first meetings are in Tucson on Tuesday, May 2, 5 p.m. at the Riverpark Inn, and Wednesday, May 3, 5 p.m. at Marana Middle School.  Presentations will start at 5:15 wth individual discussions, but no public forum, following.

After these meetings, ADOT will select a “preferred alternative” route, which could, but is not likely to, include a “No Build” option.  The first round of meetings last year had over 500 people attending and published comments were overwhelmingly against I-11 or an I-11 route through the Avra Valley.  That may be one reason ADOT is doing its best to low-key the public meetings they are required to hold.

Another reason may be that I-11 is in sharp conflict with the stated goals of the national administration to bring American jobs home from other countries.  The “Final Purpose and Need Memorandum” justifying I-11, put online by ADOT February 28, 2017, continues its calls for “nearshoring” and “integrative manufacturing.”

“Nearshoring” is attracting US companies from China to lower-wage Mexico.  “Integrative manufacturing” means R&D in the US with production and assembly in Mexico.  The Port of Guaymas is being expanded to steal shipping jobs from the West Coast.  Read it for yourself at I11study.com, click on Arizona and then on Reports. 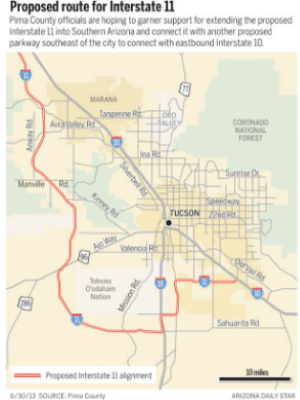 In addition to facilitating the export of jobs from the US, an Avra Valley I-11will destroy existing jobs along the present I-10 corridor and hurt tourism at Saguaro National Park, Arizona-Sonora Desert Museum, Kitt Peak, etc.  I-11 threatens wildlife, from desert tortoises to bighorn sheep.   Peaceful rural communities with thousands of families will face air and noise pollution, hazardous cargo, and increased smuggling.   Pima County Administrator Chuck Huckelberry has been pushing an Avra Valley I-11 route for years in opposition to Board of Supervisor’s Resolution 2007-343 opposing any I-10 bypass in the county.

An Avra Valley I-11 route will also cost nearly $2 billion more than double-decking just six miles of I-10, from Ruthrauff to I-19; ADOT’s numbers.

Additional public meetings are set for May 4 at Nogales High School, May 10 at Dorothy Powell Senior Adult Center in Casa Grande, May 11 at the Wickenburg Community Center, and May 16 at the Buckeye Community Center, all at 5 p.m.  The public – that’s us – should show up and speak up  – and if you can’t go, use their website to submit your comments.  The deadline is June 2.

Postscript:  With the White House announcing its “Hire American” program to keep and bring back jobs from US companies abroad, I emailed both the White House and the federal Dept. of Transportation, citing the information above and posing this question: Isn’t proposed Interstate 11 in Southern Arizona contrary to the Administration’s pledge to keep and return American jobs?

The White House sent me a nice video of the Easter Egg Roll and this Memo:  “Buy American and Hire American” is more than just a slogan, it is the cornerstone of President Donald J. Trump’s vision for a government that, for the first time in decades, answers to the American workers who built this country.

USDOT’s David Martin replied: Your question can best be answered by DOT at the state level, or some other state/local government agency.  Well…duh!

So I wrote to the DOT Press Office with a request to forward a similar message directly to DOT Secretary Elaine Chao, requesting a prompt response.  There is no email address for the Secretary on the DOT website.

Not a word about I-11 from the White House.  Nothing so far from DOT Secretary Chao.  The only way We, the People, will be heard is to show up and speak up.  Again.