WASHINGTON – Mortality rates are higher among seniors who are aging in isolation, a “silent killer” that affects millions but goes mostly unnoticed, experts told a Senate committee Thursday.

Witnesses told the Senate Special Committee on Aging that an estimated 8 million older adults are affected by isolation, putting them at more risk for depression, dementia and mortality.

“While aging at home is cited as a top priority by a majority of older people, and doing so has both emotional and economic benefits, aging in place at home can also lead to isolation,” Clark said in his prepared testimony. 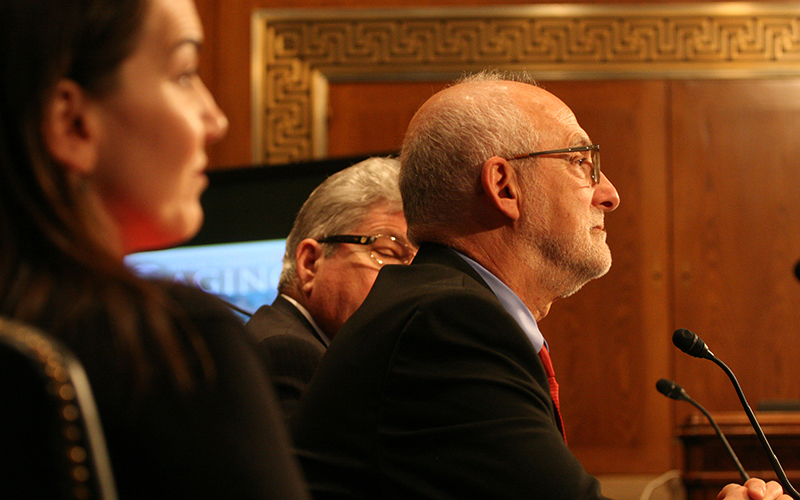 But until now, experts said, there has been little national focus on this “loneliness epidemic” – Sen. Susan Collins, R-Maine, the committee chairman, said Thursday’s hearing was the first by a congressional panel to focus on social isolation among seniors.

Holt-Lunstad said cumulative evidence from 148 different studies that included more than 300,000 participants, revealed that greater social connection is associated with a 50 percent drop in the risk of early death.

The influence social interaction has on mortality matches or sometimes succeeds that of smoking, obesity and air pollution, she said in her testimony.

“Being connected to others socially is widely considered a fundamental human need, crucial to both well-being and survival,” Holt-Lunstad said. “Yet, an increasing portion of the U.S. population now experiences isolation regularly.”

Clark said the findings come at a time when budgets of programs that can help connect seniors – programs like those under the Older Americans Act that helps fund Pima County’s Meals on Wheels – are facing spending cuts.

Both lawmakers and experts at the hearing recognized Meals on Wheels for its social as well as its nutritional benefits. For some senior citizens, they argued, losing that program means losing their only connection to the community outside their homes.

Clark said other reasons senior citizens may remain isolated is out of fear that if they request services they will be referred to a nursing home and lose the ability to keep living on their own.

Committee members from both sides of the aisle expressed support for further research on the problem, evidence that … the Senate committee is paying attention to this, and that makes us very pleased,” Clark said.

He offered several recommendations that he said were aimed at serving the social needs of aging adults without taking away their independence. Those included increasing funding for services like Meals on Wheels, promoting volunteer efforts that older adults can take part in and providing a wider array of affordable, accessible transportation options for senior citizens who may not be able to drive.

The goal, Clark said, is to reduce isolation and help get people into community activities that add purpose to their lives.

“The problem of social isolation is widespread and knows no race, gender, income or geographic boundaries,” he said in his prepared testimony. “Our willingness to respond and our desire to see greater awareness and resources deployed to address this … cannot be ignored.”

About Cronkite News 2425 Articles
Cronkite News is the news division of Arizona PBS. The daily news products are produced by the Walter Cronkite School of Journalism and Mass Communication at Arizona State University.