PHOENIX – Pavement originally built for durability and noise reduction can curb rising temperatures from urban heat islands – meaning the ribbons of freeways threading the Valley may lessen the effect of climate change, according to a new report.

Arizona State University professor Kamil Kaloush, who has studied heat islands for decades, and leaders at the Arizona Department of Transportation have worked independently but found a similar conclusion: Mixing liquid asphalt with melted rubber can curtail rising city temperatures.

“I think highways in the Valley around the city of Phoenix have done everything right,” Kaloush said. “Whether it is an unintended consequence of the technology, placing down the rubberized asphalt on our highways in the Phoenix area is a wonderful thing and one of the things that ADOT should be commended on.”

Urban heat islands are a modern effect of cities with sidewalks, roads and roofs absorbing the day’s heat and releasing it at night, warming the air. As development rises, so do heat islands.

Rubberized asphalt, considered an Arizona invention, is made partly with recycled tire scraps called crumb rubber. The crumb rubber is melted down and mixed with liquid asphalt and rocks. This makes the material more resilient to extreme weather and use. Since the layer of rubberized asphalt is thin it doesn’t retain as much heat as uncovered asphalt. It is also more porous and contains air pockets that hold on to the heat without releasing it at night, according to Kaloush.

The freeways that connect and ring the Phoenix area slow the heat island effect because almost all of them are covered with rubberized asphalt, ADOT spokesman Doug Nintzel said. Only two stretches of highway in the Valley aren’t covered although some areas may need to be repaved.

Despite most of Phoenix’s interstates being paved with rubberized asphalt, the noise-reduction aspect is still the most important component to ADOT. So highways next to neighborhoods are the main consideration.

“There are sections of Loop 303 in the North Valley that we didn’t put rubberized asphalt up there because no one is living there,” Nintzel said. “Also, near Sky Harbor Airport and State Route 143. Again, the decision was you don’t have neighborhoods or folks living up there. So, for now, SR 143 would be an example of where it’s not in place.”

The material that paved the way for rubberized asphalt apparently was invented by Charles McDonald, an Arizona resident. He came up with the alternative to lower the maintenance cost for pavement deterioration in the 1960s, according to an essay by retired Deputy City Engineer Don Park.

ADOT will resurface Interstate 10 from Interstate 17 to Loop 101, Nintzel said. This project is scheduled to start next year, but no dates have been selected. 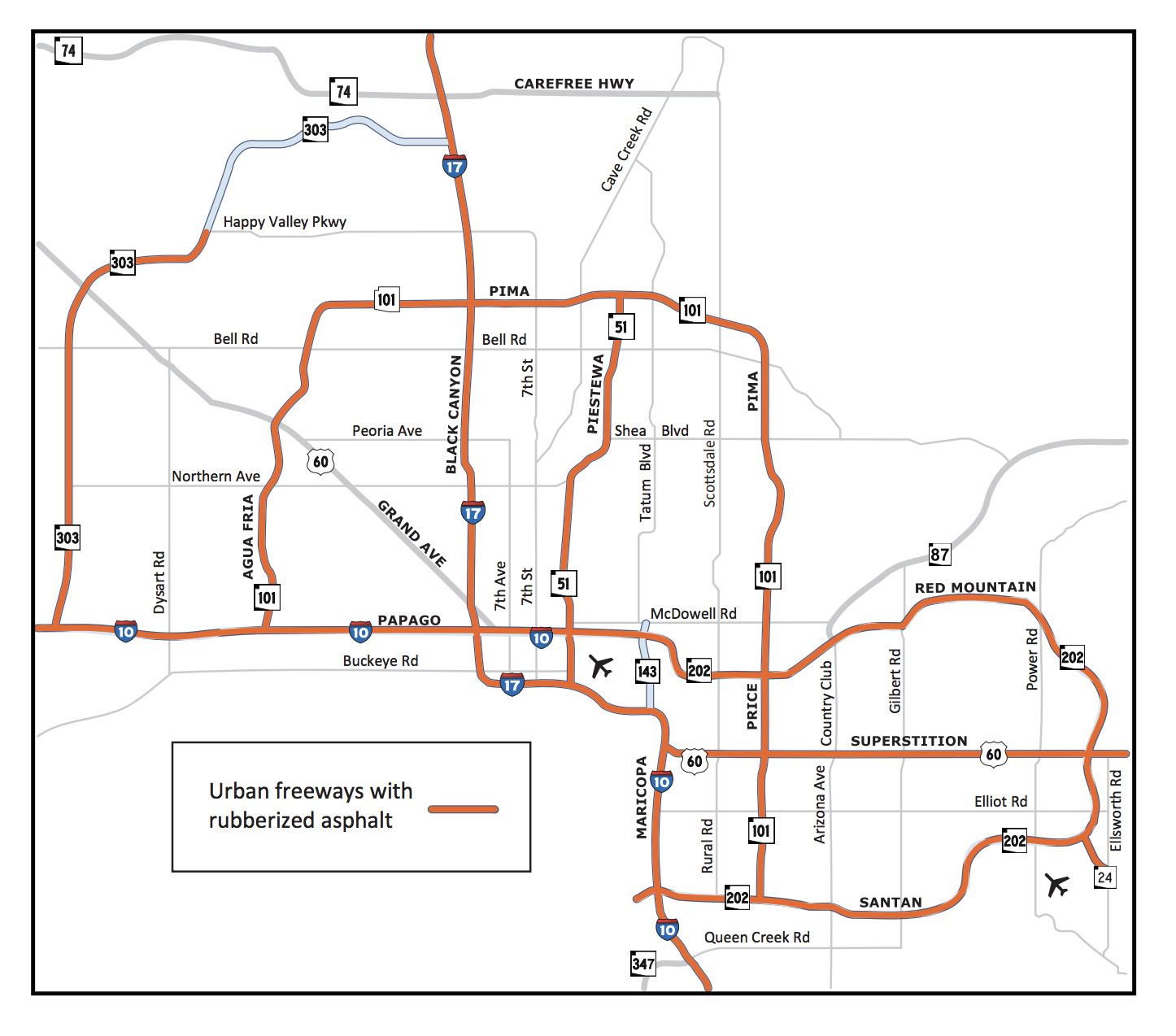 Most of the Valley freeways are covered with rubberized asphalt. Only a section of the 303 and 143 aren’t. (Map courtesy of Arizona Department of Transportation)

ADOT is also building the South Mountain Freeway Interchange from 59th Avenue to the I-10. That project is under construction and will be completed in 2019. However, the rubberized asphalt on that project will have to wait.

“We are going to take a break and not do the rubberized asphalt right in that area until that interchange is ready for completion,” Nintzel said. “We’re going to do a lot of I-10 in the meantime and working with the Maricopa association of governments on scheduling projects that will replace the existing overlay.

“You’re protecting your roof and it is also energy efficient,” Mahmoodi said. “It helps the environment, which has become a big part of doing business nowadays. You have to be conscious of your footprint on this earth and you don’t want to degrade the environment any more than it already is.”

About Cronkite News 2678 Articles
Cronkite News is the news division of Arizona PBS. The daily news products are produced by the Walter Cronkite School of Journalism and Mass Communication at Arizona State University.