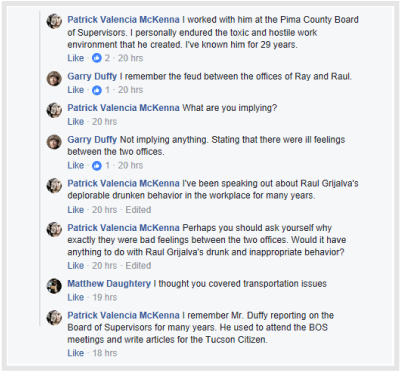 “One of my volunteers was at a location downtown and Grijalva grabbed her butt.”

Congressman Raul Grijalva is calling for an apology from the Washington Times for article about monies paid to settle a claim against him for allegedly creating a hostile work environment due to his consumption of alcohol.

The Congressman wrote of his demand in an opinion piece that appeared in the Arizona Daily Star. The article reads in part:

For those wondering what the hoopla is about, here’s as much of the story as I’m able to tell. Back on Nov. 21, a reporter at the conservative Washington Times reached out to my staff seeking comment on what he described as a settlement for a sexual harassment accusation. No such claim has ever been filed against me, and my office explained as much. Several days passed with no further contact.

Then, on Monday, the Times ran a story based on a completely different narrative: a former employee had left my office after receiving a “settlement” based on claims of a hostile work environment due to my alleged on-the-job drunkenness. The article put these allegations in the context of several unrelated sexual harassment investigations, with no journalistic reason to do so, in what I believe was an attempt to tarnish my reputation through hearsay and insinuation. The article did not name any sources for the claims it printed, and I have issued a standing request for an apology.

As I have now had to make clear to multiple news outlets, I do not work while drunk and have never had a hostile workplace environment. While I have no wish to drag current or former employees into this, I invite reporters to find any corroboration for these claims. They will be hard pressed. I am proud of the welcoming and professional environment I have always worked hard to create. 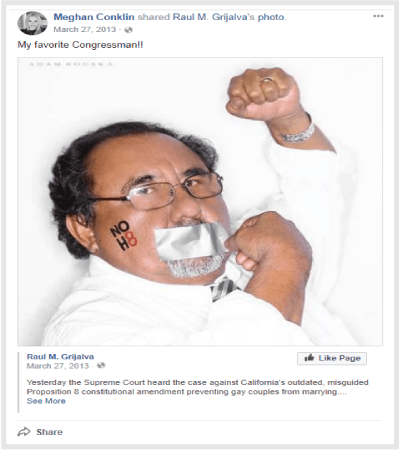 Almost immediately after the Washington Times piece was published, the Tucson Sentinel set to sleuthing. The article has been described as an attempt to shame the victim. In the piece, the Sentinel speculated that the complainant is Meghan Conklin. Neither Ms. Conklin nor Rep. Grijalva confirmed the Sentinel’s suspicions. In fact, “staffers also declined to comment specifically about Conklin, again stressing that they were bound by an NDA and could neither confirm nor deny the identity of the woman who received the severance deal,” according to the Sentinel.

According to the Sentinel, Conklin filed a complaint about Grijalva that included the allegation that he is frequently drunk on the job.

According to a December 10, 2014 article in the Arizona Daily Independent, in which Grijalva announced the appointment of Conklin as Democratic Staff Director for the 114th Congress:

“Conklin first came to the attention of Grijalva’s constituents “when she and other Beltway operatives donated to an obscure school board race in Grijalva’s congressional District.”

“Those donations were made to the campaign of Raúl’s daughter Adelita Grijalva, who was running for her fourth term on the Board.”

“Conklin has served in Washington for more than fifteen years. Prior to joining the Senate in 2013, she served as Associate Deputy Secretary of the Interior, leading the Department’s efforts to destroy the mining industry and succeeded in the Department’s withdrawal from new mining claims of 1 million acres of Federal lands.”

Grijalva said then, “Our resources and beautiful natural places – and for that matter our Congress – need people with Meghan’s experience, expertise and dedication. I couldn’t be happier to have her lead my staff and I can’t wait to get started in January.”

Tucson activist, David Morales, an avowed Grijalva opponent took to Facebook to call out the Tucson Sentinel. He wrote, “The local media has responded to the Raul Grijalva story by both defending him and victim shaming. One thing they have not done is just simply ask him what on Earth did you do that warranted giving this woman $50,000 in hush money?”

In his opinion piece, Grijalva invited “reporters to find any corroboration for these claims.” It could be difficult for reporters to corroborate the claims given that complaints might be hard to find. Morales noted on Facebook that it appeared the Star was making their voices even harder to hear. “So the Daily Star just posted Raul’s defense of himself on Facebook and my friend was the first to post about his experience working with him. They literally deleted the post and then reposted it so that they could give Raul a clear name. This is censorship and why is Our Daily Star trying to protect him?” 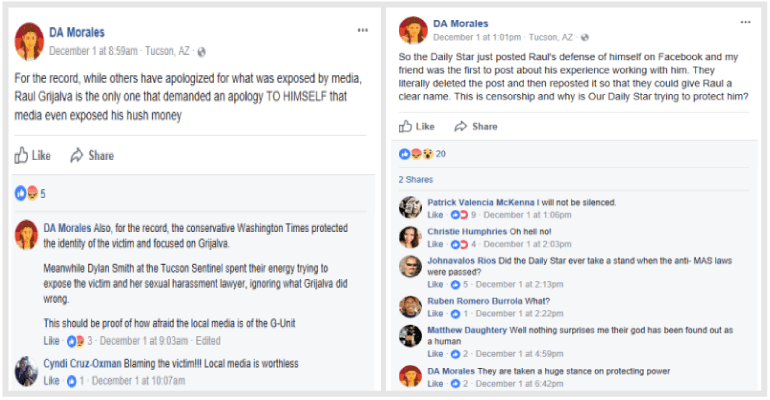 On Friday, one voice that will not be silenced in that of Grijalva’s former Republican challenger, Gabby Saucedo Mercer. In an interview on the James T. Harris show, Mercer said that the most common complaint she heard from Grijalva’s constituents was about the damage done to the southern Arizona economy as a result of his call for a boycott of Arizona in response to the controversial immigration law, SB1070.

However, when asked about the notorious “Grijalva Machine,” Saucedo Mercer stated that during her campaign, “one of my volunteers was at a location downtown and Grijalva grabbed her butt.” The woman told Saucedo Mercer that “he was drunk,” as if offering him an excuse. “I don’t’ care if he was drunk,” responded Saucedo Mercer. “She was just there to kind of keep an eye on him – because we heard he was going to give a speech – and he went by and just grabbed her butt.”

Grijalva has failed to serve the people of Arizona’s 3rd congressional district, since 2003, according to his critics. As the titular head of the Communist Party, and co-chair of the Progressive Caucus, Grijalva has neglected his constituents with stunts such as calling for a boycott.

Who is Ralph “Raul” Grijalva?

Grijalva was a member of Movimiento Estudiantil Chicano de Aztlán (MEChA) which is a radical group identified with the separatist “Aztlán” ideology. Grijalva also served as a leader of the Chicano Liberation Committee and other Chicano groups.

Grijalva was also a leader of the Raza Unida Party. According to Dr. Armando Navarro, “Grijalva was so militant that he alienated some members of Tucson’s Mexican-American community. After losing in his first bid for elective office, a 1972 run for a seat on the Tucson Unified School District Governing Board, he began to cultivate a less radical image.”

In 1974, he was elected to the Tucson Unified School District board and served as a school board member until 1986. From 1975 to 1986, Grijalva was the director of the El Pueblo Neighborhood Center, and in 1987 he was Assistant Dean for Hispanic Student Affairs at the University of Arizona. He eventually lost that job, and became a member of the Pima County Board of Supervisors from 1989 to 2002.

Richard Elias replaced Ralph on the Board of Supervisors, and the Grijalva Empire, built on nepotism and graft, has left the people of southern Arizona to live in abject poverty.