“The University of Arizona has been ordered to surrender emails by two UA scientists that a group claims will help prove that theories about human-caused climate change are false and part of a conspiracy.” (Arizona Daily Star) The professors involved are Malcolm Hughes, who is still with the UA, and Jonathan Overpeck, who left earlier this year.

In 2009, it was revealed that someone hacked in to the files of the Climatic Research Unit (CRU) based at the University of East Anglia, in England. The CRU has been a major proponent of anthropogenic global warming and a principal in report preparation for the Intergovernmental Panel on Climate Change (IPCC).

More than 1,000 internal emails and several reports from CRU have been posted on the internet and the blogosphere had gone wild with the implications of the revealed messages. Dr. Phil Jones, head of CRU, confirmed that his organization has been hacked and that the emails are accurate. Emails held at other institutions such as Penn State and the University of Arizona were not part of this disclosure.

The emails reveal a concerted effort on the part of a small group of scientists to manipulate data, suppress dissent, and foil the dissemination of the information by “losing” data and skirting Britain’s Freedom of Information Act. The emails reveal that the contention of dangerous human-induced global warming is not supported by the data, that those supporting that contention knew it, and sought to control the discussion so as to hide the unreliable nature of what they were claiming.

Part of the controversy involved the infamous “hock stick” graph devised by Michael Mann of Penn State and subsequently adopted by the IPCC. 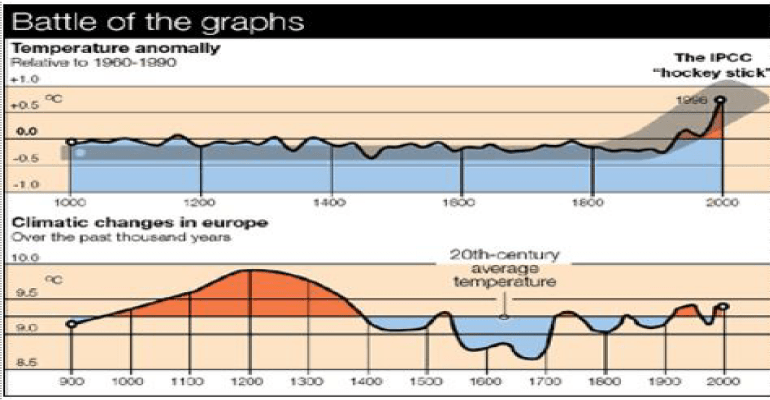 “battle of the graphs” the bottom panel shows temperatures based on proxy data and measurements. It shows that the Medieval Warm Period of 1,000 years ago was much warmer than now. Mann’s hockey stick did away with the Medieval Warm Period and showed only a large spike of recent warming – hence the name “hockey stick”. The “hockey stick” made its debut in the journal Geophysical Research Letters in 1999 in a paper by Michael Mann, Raymond Bradley, and Malcolm Hughes that built upon a 1998 paper by the same authors in the journal Nature which detailed the methodology for creating a proxy temperature reconstruction.

There are problems with the Hockey Stick according to Canadian researchers Steve McIntyre and Ross McKitrick. “The first mistake made by Mann et al. and copied by the UN in 2001 lay in the choice of proxy data. The UN’s 1996 report had recommended against reliance upon bristlecone pines as proxies for reconstructing temperature because 20th-century carbon-dioxide fertilization accelerated annual growth and caused a false appearance of exceptional recent warming. Notwithstanding the warning against reliance upon bristlecones in UN 1996, Mann et al. had relied chiefly upon a series of bristlecone-pine datasets for their reconstruction of medieval temperatures. Worse, their statistical model had given the bristlecone-pine datasets 390 times more prominence than the other datasets they had used.

Furthermore, the statistical algorithms in Mann et al. where shown to be flawed. McIntyre ran the Mann’s algorithm 10,000 times, having replaced all palaeoclimatological data with randomly-generated, electronic “red noise”. They found that, even with this entirely random data, altogether unconnected with the temperature record, the model nearly always constructed a “hockey stick” curve similar to that in the UN’s 2001 report.” (See their detailed report)

Mann had another problem. Their proxy data began to rise, but then took a plunge into cooler temperatures. They hid this decline by truncating the proxy data and substituting rising measured temperatures without telling anyone. This became known as “Mike’s Nature Trick”. (Read more)

One other incident: In my article A Simple Question for Climate Alarmists I posed this question: “What physical evidence supports the contention that carbon dioxide emissions from burning fossil fuels are the principal cause of global warming since 1970?” In a public forum, I had the opportunity to pose this question to then UofA professor Jonathan Overpeck. He could not cite any supporting physical evidence.