“What physical evidence supports the contention that carbon dioxide emissions from burning fossil fuels are the principal cause of global warming since 1970?”

(You may remember that in the 1970s climate scientists and the media were predicting a pending “ice age” as the globe cooled.)

I have posed that question to five “climate scientist” professors at the University of Arizona who claim that our carbon dioxide emissions are the principal cause of dangerous global warming. Yet, when asked the question, none could cite any supporting physical evidence.

Some of the professors would claim that computer models, when corrected for natural variation, required carbon dioxide emissions to correlate with observed warming of the late 20th Century. But computer modeling is not physical evidence; it is mere speculation. And correlation does not prove causation. One could easily substitute any increasing time series of data to produce similar results. In fact, an Australian group did a tongue-in-cheek exercise by comparing the historic price rise of a first class U.S. postage stamp with temperature. Results are shown on the graph below. The rise in the price of a stamp shows a remarkable correlation with the rise of global temperature. 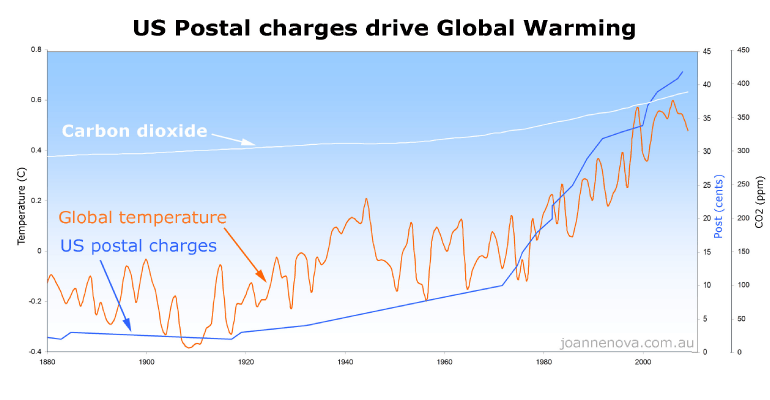 In seeking an answer to the initial question, I also read the many reports from the UN Intergovernmental Panel on Climate Change. The reports provide no physical evidence, only various scenarios generated by computers. The outputs from computer models diverge widely from observational evidence because the models attribute too much warming influence to carbon dioxide emissions and too little to natural variation. (See Why Climate Models Run Hot by Rud Istvan.) 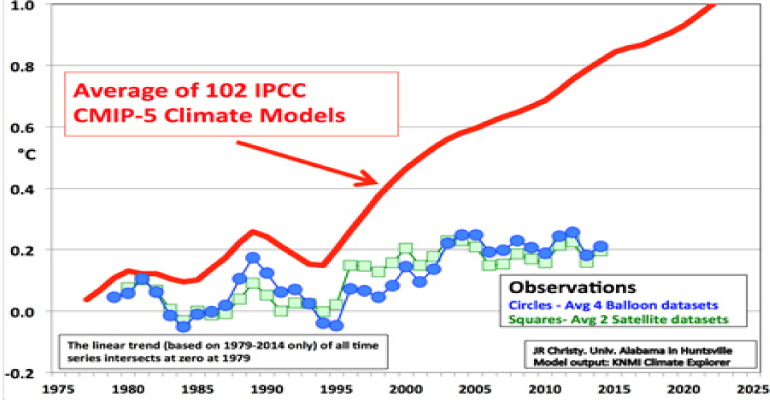 It appears that there is no specific physical evidence showing that carbon dioxide emissions have a significant effect on global temperature. There is, however, physical evidence that our carbon dioxide emissions are not having any significant effect, see my article Evidence that CO2 emissions do not intensify the greenhouse effect for details. That article examines four predictions made by climate alarmists of what we should see as atmospheric carbon dioxide content rises. In each case, what really happened was the opposite of what was predicted.

The benighted, eco-faddish, Tucson City council wants to reduce the City’s carbon footprint by installing 100 percent renewable energy for all city government operations so Tucson will not get as hot as Phoenix. (Source) If they do that, they really will be in the dark. In another article, Impact of Paris climate accord and why Trump was right to dump it, I present research which shows that even if all countries fulfilled their pledges to reduce carbon dioxide emissions made in the Paris Climate Accord, it would make a difference of only 0.17°C by the year 2100.

One other complication, Fake warming: A new peer-reviewed study finds that nearly all reported warming in the 20th century is a result of historic adjustments made to the original data. The study concludes: “The conclusive findings of this research are that the three GAST data sets [Global Average Surface Temperature (GAST) data, produced by NOAA, NASA, and HADLEY] are not a valid representation of reality. In fact, the magnitude of their historical data adjustments, that removed their cyclical temperature patterns, are totally inconsistent with published and credible U.S. and other temperature data. Thus, it is impossible to conclude from the three published GAST data sets that recent years have been the warmest ever –despite current claims of record setting warming.” Read the study

For those who claim that our carbon dioxide emissions are the principal cause of global warming, I say show me the evidence.