The much touted Paris Climate Accord aims at worldwide reduction of carbon dioxide emissions in order to keep global temperatures from rising more than 2°C above pre-industrial levels. This goal is purely arbitrary and based not upon any physical evidence, but upon the unproven assumption that carbon dioxide emissions play a significant role in global warming. What the Paris Accord really does is to transfer trillions of dollars from industrialized countries, mainly the US, to the sticky-fingered United Nations and to developing nations. It has a very minimal effect on global warming.

Several studies estimate the actual effects of the Accord. The most recent is from Bjorn Lomborg, published in the peer-reviewed journal, Global Policy (read full paper). Here is the paper abstract:

This article investigates the temperature reduction impact of major climate policy proposals implemented by 2030, using the standard MAGICC climate model [developed at the National Center for Atmospheric Research, Boulder, US, and University of Adelaide, Australia].

Even optimistically assuming that promised emission cuts are maintained throughout the century, the impacts are generally small.

The full US promise for the COP21 climate conference in Paris, its so-called Intended Nationally Determined Contribution (INDC) will reduce temperature rise by 0.031°C.

All climate policies by the US, China, the EU and the rest of the world, implemented from the early 2000s to 2030 and sustained through the century will likely reduce global temperature rise about 0.17°C in 2100. 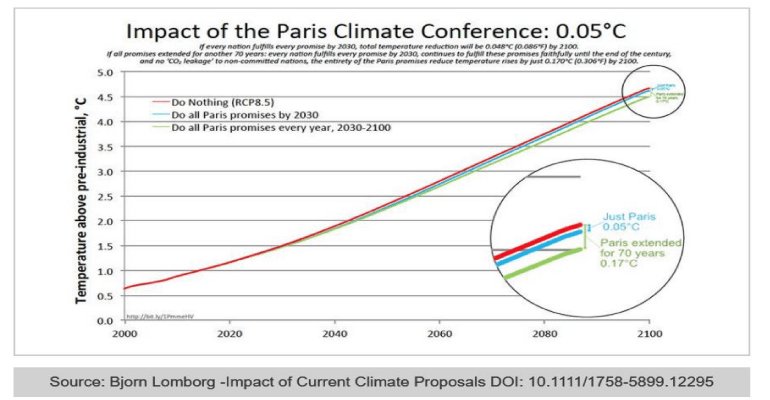 A whopping $7.4 trillion will be spent globally on new green energy facilities in the coming decades, but another $5.3 trillion is needed to meet the goals of the Paris climate accord, according to a new report.

Bloomberg New Energy Finance (BNEF) is out with a new long-term energy outlook report, this time projecting a total of $12.7 trillion to keep projected global warming below 2 degrees Celsius by the end of the century — a goal of the Paris accord. Read more

“The current focus on CO2 emissions reductions risks having a massively expensive global solution that is more damaging to societies than the problem of climate change.” – Dr. Judith Curry

But the Accord will harm poor people in developing countries:

While the plan’s costs may range as high as $1 trillion annually, none of it would have any meaningful impact on the roughly three billion people in the developing world who currently have no real access to energy.

Much of the developing world still burns dung as their chief means of cooking and heating. Realistically, the most effective means of saving their lives and improving living conditions would be to provide the steady electricity generation needed for water and sewage treatment as well as lighting and cooking.

The Paris Accord, in contrast, essentially ends any chance to help them. While natural gas and coal power plants could provide reliable, affordable electricity for these populations, the Accord aims to steadily reduce fossil fuel usage. Read more

Estimates of the Accord’s effectiveness in reducing global warming as stated above are based on analysis of surface temperatures. However, “For the past 38 years, satellites have continually tracked global temperatures. And what they’ve recorded in that time is a temperature increase averaging 0.136 degrees Celsius per decade. That means on its current trajectory the Earth could see a potential surface temperature increase of 1.36 degrees Celsius over the entire 21st century.

Noting the current warming trajectory, it appears that by simply doing nothing, the world could accomplish the main goal of the Accord.” (IBID.)