September 7, 2017 – Prescott Valley – ADOT reported more than 8600 feet of copper wire stolen from junction boxes north and south of Lakeshore Drive at Fain Road. These boxes supply power for the street lamps along the east side of Fain Road. Dollars loss estimate including labor to reinstall was placed at $10,000.

September 20, 2017 – Prescott Valley – same area as above, except targeting the west side of the roadway. ADOT reported more than 15,000 feet of 8-gauge cooper wire stolen from the streetlight array at the intersection of Fain Road and Lakeshore Drive. 10,000 feet of the stolen wire wrapped in black insulation and 5,000 feet wrapped in green insulation. Dollar loss estimated at $9350.00.

December 18, 2017 – Seligman – ADOT reported the theft of 600 feet of 8-gauge cooper wire covered with black insulation. The theft likely occurred sometime in recent weeks at the west bound on ramp for 40 in Seligman involving wiring for street lights. Loss estimate not provided.

Additionally, Prescott Valley Police Department has at least one additional cooper wire theft case reported as does the Yavapai Tribal Police involving a theft near the VA Hospital on Highway 89 in November or December of this year. 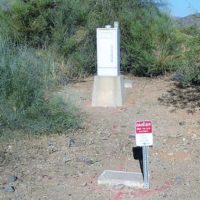 ADOT personnel believe the theft occurred sometime between December 1, 2017, and December 11, 2017. The estimated loss, including labor to reinstall the stolen wiring, is $5000.

YCSO is seeking anyone with information on this theft to contact the Sheriff’s Office at 928-771-3260 or Yavapai Silent Witness at 1800-932-3232. A tip to Silent Witness leading to the arrest of a suspect in this case becomes eligible for a cash reward. Refer to case number 17-044177.