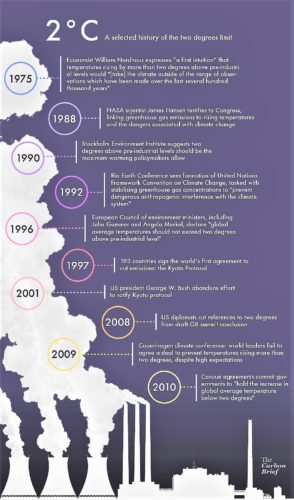 It is a prime tenet of global warming alarmism that we must reduce carbon dioxide emissions in order to “limit the increase in global temperatures to 3.6 degrees Fahrenheit (2 degrees Celsius) above pre-industrial levels, or risk hitting a tipping point where the impact becomes irreversible” and all hell will break loose. This two-degree number has been adopted by the IPCC and by many governments, and is a goal of the Paris Climate Accord. (What the Paris Accord really does is to transfer trillions of dollars from industrialized countries, mainly the US, to the sticky-fingered United Nations and to developing nations.)

Does that number, two degrees Celsius, have any basis in science? Here is some history on how it developed (graphic from Carbon Brief).

It seems that the number was accepted without much question. Where did the number come from? Emails hacked from the Climatic Research Unit (CRU) based at the University of East Anglia during “Climategate” revealed that Dr. Phil Jones, head of CRU, inadvertently admitted that the number was “plucked out of thin air” and has no basis in science.

In this context, “pre-industrial levels” means prior to the year 1850 which marked the end of the “Little Ice Age.” The globe has been warming (on and off) since 1850.

And guess what? According to the Berkeley Earth global average surface air temperature record, Earth has already warmed more than two degrees Celsius since the early 1800’s pre-industrial levels. (Source) See any irreversible tipping points yet?

Let’s examine Earth’s temperature history of the past 600 million years to see if two degrees Celsius is a big deal in Earth’s history. Estimates of temperature and CO2 content are based on geologic, biologic, and isotopic evidence. Sources for figure above:

Notice in the figure above that for most of the past 600 millions years, global temperatures have been 5- to 12 degrees Celsius higher than they are now, i.e. a warmer world is the norm. There has been no “run-away” warming and life has been robust and flourishing, especially during the steamy Cretaceous Period when global temperatures are estimated to have been at least 12 degrees Celsius higher than now.

Dear politicians, the two degrees Celsius goal is a political one, not a scientific one. No matter what you do, you cannot stop climate change. Adapt to it and stop wasting trillions of dollars on this unnecessary and futile effort.

“In climate research and modeling, we should recognize that we are dealing with a coupled non-linear chaotic system, and therefore that the prediction of a specific future climate state is not possible.” — Final chapter, Draft TAR 2000 (Third Assessment Report), IPCC.

While controlling emissions from burning fossil fuels may have some beneficial effects on air quality, it will have no measurable effect on climate. It will have great detrimental effects on the economy and our standard of living. The greatest danger of climate change is that politicians think they can stop it.