Climate alarmists have long been predicting that global warming induced sea level rise would make low-lying Pacific islands disappear and cause thousands of “climate refugees” to seek new homes. Here are some examples:

These alarmist claims have not come to pass because of the geologic processes that build these islands.

A new paper published in Nature Communications on Feb. 9, 2018, shows that despite sea level rise, most islands are increasing in land area.

A University of Auckland study (Patterns of island change and persistence offer alternate adaptation pathways for atoll nations, Paul S. Kench, Murray R. Ford & Susan D. Owen) examined changes in the geography of Tuvalu’s nine atolls and 101 reef islands between 1971 and 2014, using aerial photographs and satellite imagery. The paper claims that local sea level has risen at twice the global average (~3.90 + 0.4 mm.yr-1). That translates to about six inches over the 43-year period. However, the study found eight of the atolls and almost three-quarters of the islands grew during the study period, increasing Tuvalu’s total land area by 2.9 percent, even though sea levels in the country rose at twice the global average. (Read Full paper in Nature). 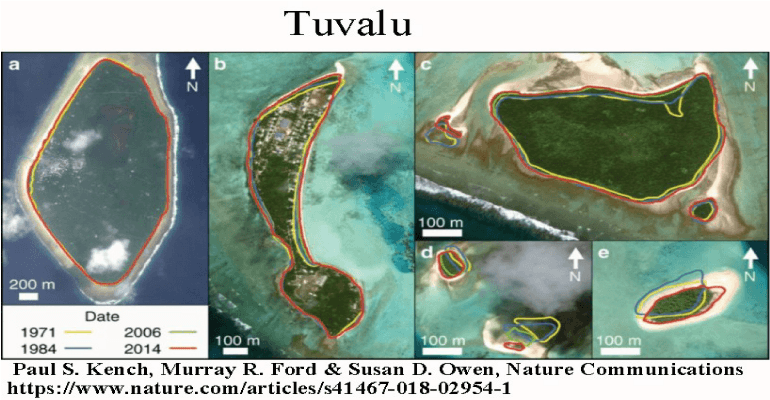 The reason that these islands are gaining area is that as the sea rises, coral reefs grow higher and trap coral debris and sand to build up the island. The science of coral reef atolls is not new. This process was first described by Charles Darwin in 1842: The structure and distribution of coral reefs. Being the first part of the geology of the voyage of the Beagle, under the command of Capt. Fitzroy, R.N. during the years 1832 to 1836. London: Smith Elder and Co. (Link to Darwin’s full description). 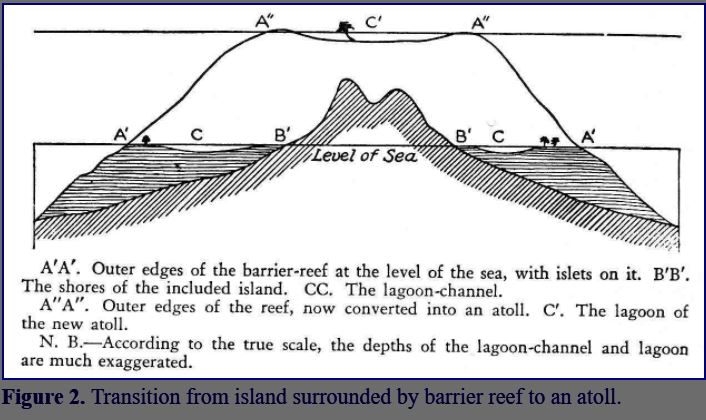 This figure from Darwin’s paper shows that coral atolls originate around a volcanic island or seamount. As sea level rises (or land sinks) the corals grow to remain in shallow water and the coral debris and sand cause an atoll island to form. That the corals were able to overcome a recent six-inch rise in sea level may not seem very much, but remember that these islands have been around a long time and dealt with a 400-foot rise in sea level since the depths of the last glacial epoch.

The findings of the new paper cited above support previous studies. For instance:

“Funafuti Atoll, in the tropical Pacific Ocean, has experienced some of the highest rates of sea-level rise (~5.1 + 0.7 mm/yr), totaling ~0.30 + 0.04 m over the past 60 yr. We analyzed six time slices of shoreline position over the past 118 yr at 29 islands of Funafuti Atoll to determine their physical response to recent sea-level rise. Despite the magnitude of this rise, no islands have been lost, the majority have enlarged, and there has been a 7.3% increase in net island area over the past century (A.D. 1897–2013). There is no evidence of heightened erosion over the past half-century as sea-level rise accelerated. Reef islands in Funafuti continually adjust their size, shape, and position in response to variations in boundary conditions, including storms, sediment supply, as well as sea level. Results suggest a more optimistic prognosis for the habitability of atoll nations and demonstrate the importance of resolving recent rates and styles of island change to inform adaptation strategies.”