Maricopa County Superior Court Judge Daniel Kiley has ruled that Arizona Corporation Commissioner Bob Burns has a right to look at the financial records of Arizona Public Service (APS) and its parent company Pinnacle West Capital Corp., but his fellow commissioners have the power to refuse to enforce his subpoena.

In other words, the judge appears to agree with Burns that a single commissioner has the authority to subpoena records, but then ruled that a simple majority of commissioners can block up to two duly-elected commissioners from gathering information relevant to rate setting cases. The effect is that if one or two commissioners suspect misbehavior by a regulated entity such as APS, three utility-friendly commissioners can prevent them from providing the vigorous oversight the public expects.

In his ruling, Kiley notes that Commissioner Burns alleges that APS and Pinnacle West “have used, and continue to use, funds to support particular candidates running for seats on the ACC; that these funds were generated from “fees collected by APS from its Arizona customers”; and that these funds were expended to secure the “goodwill” and “allegiance” of certain candidates in order to secure “favorable treatment of APS in proceedings before the ACC.” He alleges that “the use of ratepayer-generated funds…to fund political influence efforts” threatens to “create regulatory capture,” resulting in an “increase” in “the cost of utility services to APS’s customers” as “undue corporate utility influence” induces ACC members to “approv[e] unreasonable rate burdens for APS customers and/or disregard the financial…interests of such consumers.”

It is widely believed that APS or Pinnacle West contributed part, or all, of the over $3 million spent by in 2014 to the campaigns of Commissioner Tom Forese and former Commissioner Doug Little.

Citing the importance of “open and detailed disclosures” of the “contributions” made by the Companies in order to allow the ACC to determine “whether adjustments to APS rates” are appropriate to “avoid improper or unreasonable rate burdens being placed on APS customers,” Commissioner Burns alleges that he exercised his “constitutional and statutory authorit[y]” to “issue two subpoenas to gather documentary and testimonial evidence from the Companies. He further alleges that “APS only partly complied with” the Subpoenas, and that the Companies “have refused to comply with the remainder of the Subpoenas.” He alleges that he filed a motion before the ACC to compel compliance with the Subpoenas, asserting that other members of the ACC should recognize and uphold his “independent authority to issue and enforce his investigatory subpoenas,” but that the Defendant Commissioners “voted to deny” his motion, thereby “ostensibly den[ying] [him] any further right to pursue or enforce his investigatory subpoenas.” He alleges that the Defendant Commissioners, by their votes, thus “obstruct[ed]” his efforts to investigate “[t]he means…by which [the Companies] have attempted or may attempt to…capture the allegiance of or influence the attitudes and actions of ACC Commissioners or of candidates for such positions.”

The dark money group behind the funding of Forese and Little’s campaign efforts claim that they are a “social welfare” organizations and are therefore exempt from revealing the identity of their contributors.

Burns has argued that some of his fellow commissioners are captives of APS.

Kiley rejected the notion that if APS and Pinnacle West were forced to reveal their campaign contributions, it would chill their right to free speech and cause them to stop making contributions.

Despite the Burns’ lawsuit, APS and Pinnacle West haven’t seemed shy about giving ratepayers’ money to legislators to various and sundry items including re-election campaigns. In fact emails show that the state’s lawmakers regularly turn to the companies for financial assistance.

From new legislators’ name tags to trips to Mexico, APS appears to be the deep pocket lawmakers turn to for cash otherwise known as “sponsorship.” 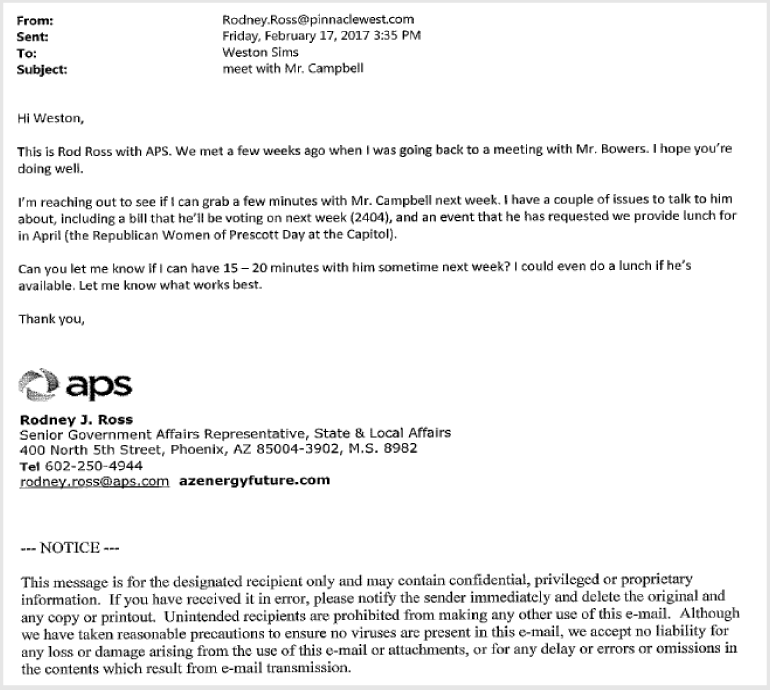 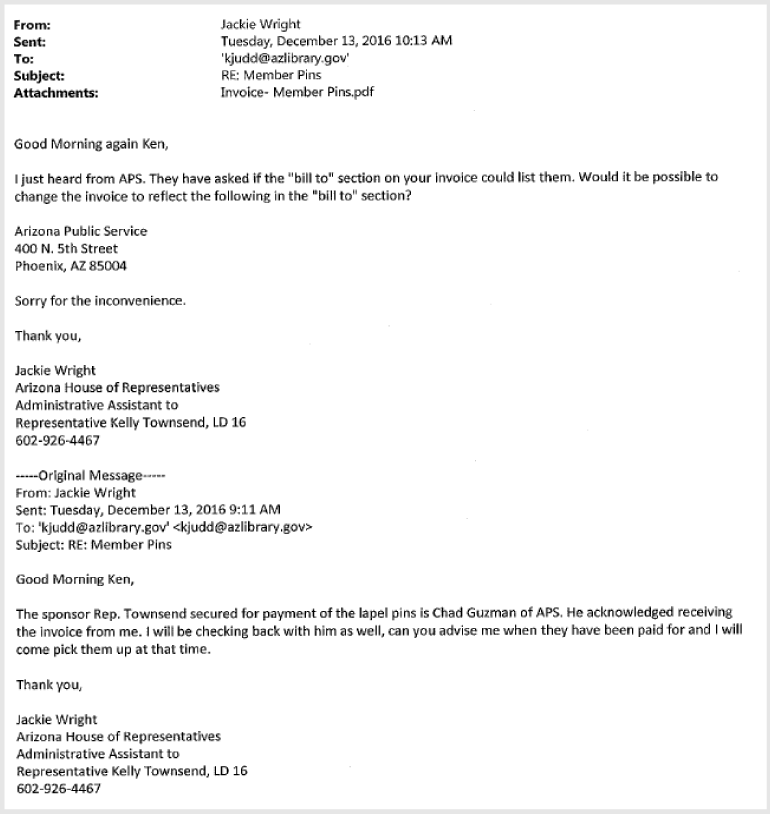 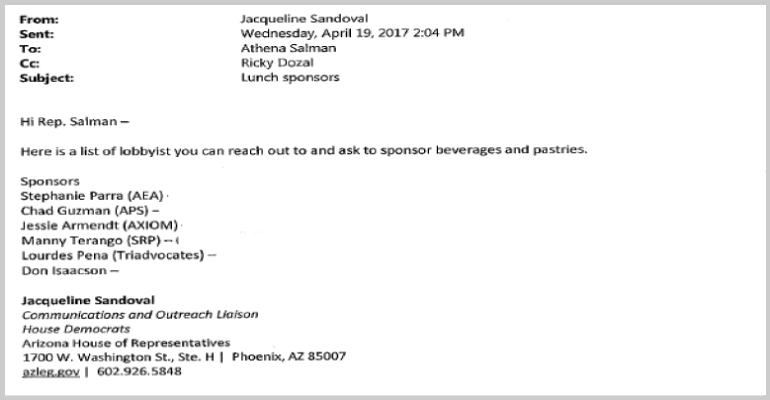 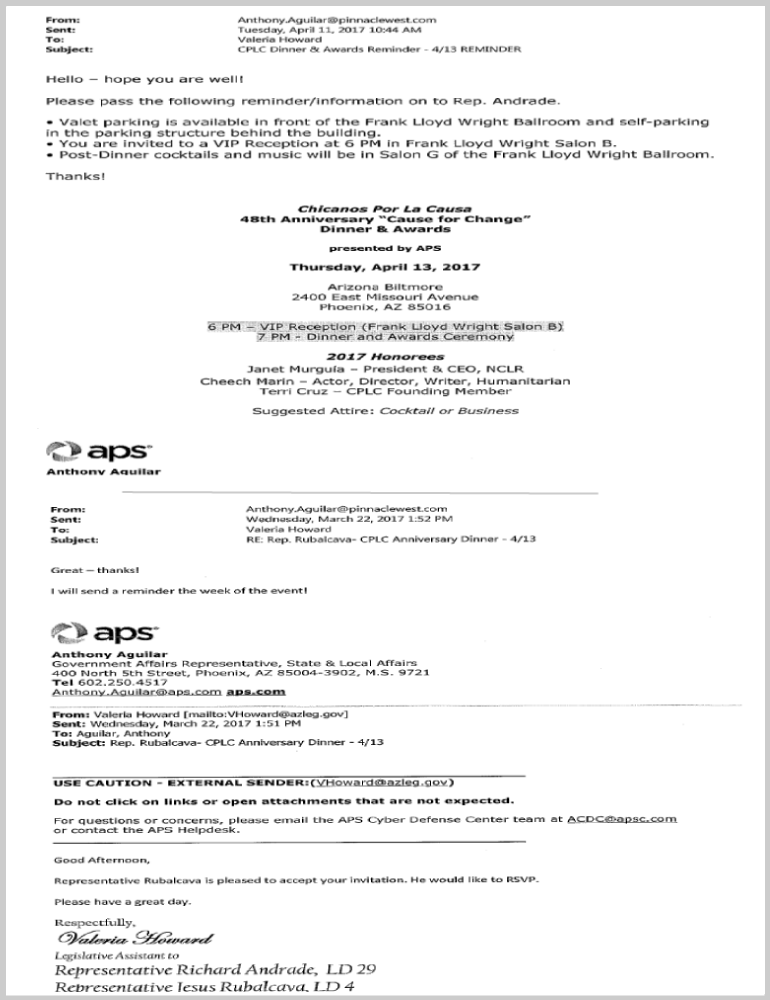 Kiley found that the Arizona Corporation Commission has the authority “as a whole” to issue a contempt citation to APS and Pinnacle West for refusing to comply with Burns’ subpoena.

Commissioner Dunn has made a show of developing new ethics rules for the commission. Yet, that has not stopped him from joining Forese and Tobin, who have reputations for being ethically challenged, in blocking Burns. There had been high hopes that newly appointed Commissioner Justin Olson would understand the need for commissioners to provide vigorous oversight. Olson had earned a reputation for honesty while serving as a legislator, but nothing he has done since his appointment indicates that he will do anything but go along with the majority.