Controversy erupted on Thursday after Sen. John McCain criticized Gina Haspel; President Donald Trump’s pick to become the director of the CIA. After McCain tweeted his disapproval of Haspel, conversations turned to the value of torture.

In an interview on the Fox Business Network show hosted by Charles Payne, retired Air Force Lt. Gen. Thomas McInerney stated that while Haspel can’t use torture anymore because Congress has determined “that it’s not legal. The fact is John McCain — it worked on John. That’s why they call him ‘Songbird John.’”

While the McCain camp has been critical of Trump’s attack on the media, the senator’s wife Cindy, went after Payne. She tweeted an admonition that elicited an apology from Payne.

McInerney echoed the sentiments of former Vice-President Dick Cheney in his discussion with Payne. “The fact is those methods can work and they’re effective, as former vice president Cheney said. If we have to use them to save a million American lives, we will do whatever we have to,” said McInerney on the use of torture.

I regret I did not catch this remark, as it should have been challenged. As a proud military veteran and son of a Vietnam Vet these words neither reflect my or the network’s feelings about Senator McCain, or his remarkable service and sacrifice to this country.”
Charles V. Payne

@kellysadler45 May I remind you my husband has a family, 7 children and 5 grandchildren.

Although, Sadler was soundly criticized for her comment by the McCain camp, and sensitivity is demanded by all, the senator is pushing his book on Twitter. From condemning a 33-year career veteran of the CIA to hawking his book, McCain appears to be alive and kicking the hell out of anyone who might disagree with him in the twittershpere. McCain tweeted on Thursday morning:

Read a new excerpt from my upcoming book in @WSJ: “John McCain: ‘Vladimir Putin Is an Evil Man’” 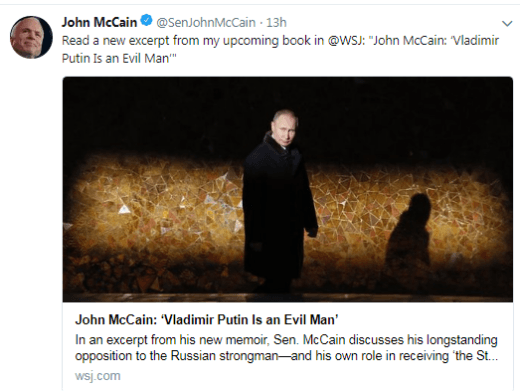 The excerpt reads in part:

I regularly attend an annual security conference in Halifax, Nova Scotia. The only thing unusual about the November 2016 meeting was that it occurred just after the U.S. presidential election, and most of the formal and informal conversations among the conferees were about what to expect from the president-elect, Donald Trump.

That Saturday evening, Sir Andrew Wood, a retired British diplomat who had served as the United Kingdom’s ambassador to Russia during Vladimir Putin’s rapid ascent to the Russian presidency, asked to have a word. He told me he knew a former MI6 officer by the name of Christopher Steele, who had been commissioned to investigate connections between the Trump campaign and Russian agents as well as potentially compromising information about the president-elect that Putin allegedly possessed. Steele had prepared a report that Wood had not read and conceded was mostly raw, unverified intelligence, but that the author strongly believed merited a thorough examination by counterintelligence experts.

Our impromptu meeting felt charged with a strange intensity. No one wisecracked to lighten the mood. We spoke in lowered voices. The room was dimly lit, and the atmosphere was eerie. I was taken aback. They were shocking allegations.

I agreed to receive a copy of what is now referred to as “the dossier.” I reviewed its contents. The allegations were disturbing, but I had no idea which if any were true. I could not independently verify any of it, and so I did what any American who cares about our nation’s security should have done. I put the dossier in my office safe, called the office of the director of the FBI, Jim Comey, and asked for a meeting. I went to see him at his earliest convenience, handed him the dossier and explained how it had come into my possession. I said I didn’t know what to make of it, and I trusted the FBI would examine it carefully and investigate its claims.