Questions have arisen about the control Sen. John McCain’s operatives maintain over the Arizona GOP in response to controversy surrounding a possible replacement for the terminally ill politician. Specifically, the appearance of Jon Seaton at the Party’s headquarters has raised concerns about impartiality this primary election season.

For years, what has become known as the “McCain Machine,” has crushed efforts by the grassroots members and their chosen candidates. McCain ruled the Party with an iron fist and when he wasn’t hurling epithets at conservatives, his machine was ginning out compliant precinct committeemen.

The presence of Seaton, a political consultant with East Meridian Strategies, provides evidence to some that while McCain’s grip on health deteriorates, his grip on the Party is still strong.

“Regarding questions as to what Jon Seaton aka a McCain Operative is doing in the AZGOP office in the absence of Exec Director Matt Kenney,” wrote Frosty Taylor this month in her popular website, MCRC Briefs. “An interesting message/photo came in yesterday claiming the photograph was Seaton giving hand signals to the AZGOP elite at the January mandatory meeting during the discussion on the removal of AZGOP Chairman Jonathan Lines. People in the know are concerned that Seaton is in AZGOP headquarters make sure Sen. John McCain maintains control of the state party.”

Several Of You Have Inquired as to what Jon Seaton is doing at the AZGOP HQ. Seems he was recently observed working at Executive Director Matt Kenney’s desk while Kenney is recuperating from back surgery. Kyle Pierce is the interim executive director appointed by Chairman Jonathan Lines, according to Communication Director Ayshia Connor.

As to Seaton, Connor explained, “Seaton has experience managing victory programs and is a former Regional Political Director with the RNC. He has helped coordinate the relationship between the AZGOP and RNC, and spoken at a few field training sessions. Beyond that he has no formal role at the AZGOP. When he’s in the office he sits wherever there is a free desk.”

The State Party previously reported that Matt Kenney had been replaced by Kyle Pierce as Executive Director, so Connor’s claim that Kenney was still Executive Director and was simply on medical leave reinforces the belief that Seaton has stepped into Kenney’s place and Pierce’s promotion was solely for public consumption and does not reflect the actual organizational structure. Subbing Seaton in for Kenney makes some sense as Seaton and Kenney worked closely on McCain’s Grassroots’ PAC to drive conservative precinct committeemen out of the party.

Not only was Seaton McCain’s guy, he ran Lindsey Graham’s presidential campaign, and he was a senior official with John McCain’s Super PAC that targeted conservative precinct committeemen.

During his successful run for the chairmanship of the AZGOP, Jonathan Lines had promised Party members that he would not hire Kenney, an aggressive McCain operative. Lines broke that promise and Party members say he doubled down on his betrayal by allowing Seaton access others are denied. 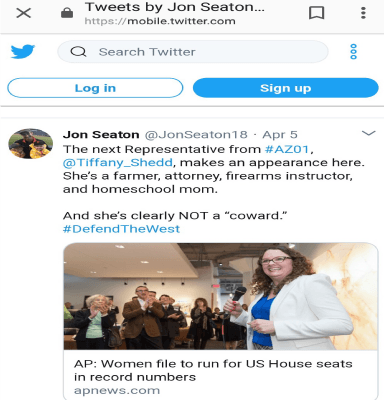 The McCain machine operates in part to ensure that populist or conservative candidates do not make it out of Republican primaries. Only the most mega-corporate-friendly candidates and their consultants are granted access to all of the Party’s resources.

In the case of Ward and Bennett the attacks from the Republican “establishment” have been blistering.