PHOENIX – The Boeing 757 is minutes from takeoff to the Grand Canyon, but the plane’s interior lacks that airliner feel – its silver insulation is exposed, its overhead luggage bins and row upon row of seats gone.

The exterior is different, too. A third engine has been added the twin-engine 757.

Even the preflight patter with passengers is different. You’ll have to watch your step, test pilot Helmuth Eggeling tells the few passengers onboard, but instead of tripping over other passengers’ feet, they’ll have to avoid stumbling in a cabin full of electronic equipment.

Eggeling, a test pilot for Honeywell International Inc. for nearly three decades, is surrounded by cabinets stacked with computers to precisely monitor the performance of new equipment on the test flight: new weather-radar systems, WiFi with improved connectivity and a third, more efficient turbofan jet engine attached to the outside of the plane for testing.

‘Testing planes in an era of congested skies’

Honeywell develops and tests aviation systems in Arizona during an era of flight considered one of the safest in modern history, even though deadly accidents can occur, such as what happened on a Southwest Airlines flight when a passenger died last month when she was partly sucked out of a window shattered by engine debris.

Honeywell, and other aerospace industry leaders such as Boeing and Airbus, test new technology in conditions ranging from extreme weather to bustling runways. 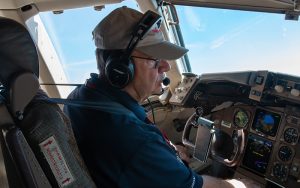 Helmuth Eggeling, a pilot for over 53 years, flies his last flight for Honeywell on May 31, 2018. Eggeling flew for Honeywell for 28 years of his career. (Photo by Nick Serpa/Cronkite News)

Aviation manufacturers also are looking toward a more automated future that could include planes piloted by computers rather than humans, similar to the emerging driverless-cars industry.

“The weather is great for flying here,” Pickett said.

The scorching heat, which even has forced airlines to ground some commercial flights, is ideal for testing new engines’ ability to withstand intense conditions thousands of feet in the air, engineers said.

According to the Arizona Commerce Authority, Arizona ranks fourth nationwide in generating aerospace revenue, which totals to more than $14 billion for the state’s aerospace industry.

“The philosophy is to get everything automated to reduce the pilot’s workload,” Eggeling sad. “It’s necessary because the sky is getting crowded.” 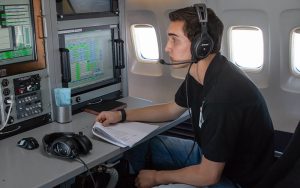 According to the Federal Aviation Administration, as many as 5,000 domestic flights are in the air at peak times every day, serving more than 2.5 million passengers.

“Weather radar helps with safety because you don’t have to fly through any rough weather,” Jensen said, and that makes passengers more comfortable.

The comforts of in-flight WiFi, better air-conditioning and smoother landings are important to frequent flyers, she said, which drives Honeywell’s strategy on what technology to develop.

‘Technology that may replace pilots with computers’

The biggest development in the distant future may be pilotless airline flights, sparked by new drone technology.

FAA regulations require two pilots to be in the cockpit on all commercial airline flights, but that could change if drone and pilotless systems become more popular, said Dennis Wren, a professor of unmanned aerial systems at Embry-Riddle Aeronautical University in Prescott.

One pilot might take the plane into the air while her co-pilot stays on the ground, even handling multiple planes at one time, Wren said. The technology that pilots drones is similar to that of planes, he said.

Major airlines may be incentivized to adopt pilotless-aircraft technology in order to cut the cost of hiring extra pilots, wren said.

As technology continues to advance, Wren said, commercial flights could be without human pilots, but that would require leaping over emotional, strategic and technological hurdles, including updated regulations and public fears. Passengers are comfortable with autopilot systems because they know humans are in the cockpit as a backup, but a pilotless plane is beyond the imagination of most people.

Computers are good at flying when they know what to expect, he said, but may have trouble adjusting to situations experienced human pilots can handle, such as storms, wind shears or equipment failures. 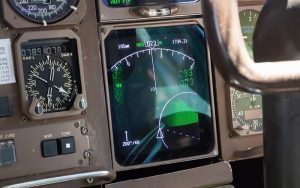 Radar and terrain-avoidance were among the systems being tested in Arizona on a modified Boeing 757. (Photo by Nick Serpa/Cronkite News)

“Aviation, the actual act of flying, is a very dynamic environment,” Wren said.

Airlines may be spurred to adopt pilotless technology so they can cut costs and hire less fewer human pilots, Wren said.

Commercial adoption of pilotless systems may be far off, he said, but the airfreight industry may adopt fully autonomous-piloting first.

“The two worlds are already starting to meet,” he said.

Eggeling, who’s retiring from Honeywell and completed the Phoenix-Grand Canyon round-trip as his last test flight in May, said he doesn’t think passengers would embrace about pilotless airplanes.

“I hate to see the pilotless type of flying,” he said. “I hope I never see that.”

About Cronkite News 2435 Articles
Cronkite News is the news division of Arizona PBS. The daily news products are produced by the Walter Cronkite School of Journalism and Mass Communication at Arizona State University.