SCOTTSDALE – Upgrades around TPC Scottsdale to help improve the fan experience at the Waste Management Phoenix Open already are paying dividends on the first day of the tournament.

“With how many fans we have here, we try to better the fan experience every single year,” said tournament chairman Chance Cozby of the host Thunderbirds.

Although the 16th is the most popular and famous hole on the course, upgrades have been made farther down the course near holes 17 and 18. On the 18th hole, a second level with 60 new suites was added to the existing skyboxes, which are called villages. The new suites were sold out, Cozby said.

“It shows how much commitment there is and support for this event, not only locally but all over the country,” he said.

Chris Reid of Minnesota, attending his first Phoenix Open with his son, spent time in the new villages on 18 and compared them to the Ryder Cup. 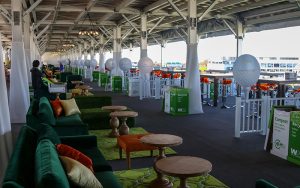 Eighteen, a new seating area along the 18th fairway, is another option for fans to sit back and relax while enjoying the Waste Management Phoenix Open. (Photo by John Mendoza/Cronkite News)

“They’re 5-star. Even nicer than at the Ryder Cup that I was at six years ago,” Reid said.

The improvements along the final two holes have helped the evolution of the course, which 20 years ago did not include skyboxes or large grandstands. The changes help build the excitement and energy for fans.

On the south side of 17, an area called The Cove was added. Suites overlook the fairway and amenities includes breakfast, lunch and an open bar. Pricing for the corporate-targeted suites start at $50,000.

The other big improvement came at an area called El Rancho, which gives views for multiple holes, the closest being the par-3 12th. A large standing structure with three rows of tables and seating provide the fans with a more comfortable view of the action.

“Because you are not on the hill, you have seats and shade when it’s hot. I think it’s great,” said Chloe Novosad, standing by a shaded table and wearing an Oklahoma State shirt for OSU alum Rickie Fowler. She has been coming to the tournament for five years.

“Just having the tables and the chairs, everything they did was great,” said said. “People were here before anyways, but this is definitely way better.”

Mikahaila Powell, who has been working at one of the concession stands, has noticed a slow start to the week, but more people are starting to learn about El Rancho.

“We got here and it was quiet,” she said, “but now that people are getting used to seeing that this is here, people see that this is new. It’s going well so far, and I think it’s just going to get busier as we get to the weekend.”