PHOENIX — A conflict of interest complaint has been filed by former State Sen. Luis Gonzales with the Arizona Attorney General’s Office regarding Pima Community College Governing Board member Demion Clinco .

In his letter of complaint, Gonzales told the Attorney General’s Office that he concluded that the Chairman of the Pima Community College District, Mr. Demion Clinco may have a direct conflict of interest which may be in violation of  the state statute that includes all public officers

Mr. Clinco responded to the ADI’s inquiry in an email:

“I have not be notified by any public agency of a complaint filed by Mr. Gonzales. The College and I will, of course, respond if we receive an agency request. I am not aware of any actions I have taken that would present a conflict of interest situation.”

Summary of Gonzales’ letter of complaint:

I was elected to the Pima Community College District’s Board of Governors representing District 5 in November of 2016.  I have knowledge of the alleged conflict of interest that is described in this communication. I decided not to seek re-election in 2018.

Based on my review of the evidence, I have reluctantly concluded that the Chairman of the Pima Community College District,  Mr. Damion Clinco may have a direct conflict of interest. Based on my experience on the Board of Governors, I felt obligated to file this official complaint with your office.

During the 2017 and 2018 fiscal years, the Chancellor submitted to the Pima Community College Board of Governors proposals to purchase four properties located in the immediate area of the Downtown Campus. Each of the properties were designed and operated as hotels.

Three of the four properties, Tucson Inn, Frontier Motel, and the El Rancho Motor Hotel (now known as Copper Cactus) were submitted for inclusion on the State and National Register of Historic Places prior to the purchase.

The fourth property acquired, the Fortuna Hotel (aka Tucson Hotel and Resort), was demolished shortly after it was purchase by the College in 2018.

As is indicated in the following Table, the Board approved the purchase of the Tucson Hotel and Resort and Tucson Inn on September 13, 2017. The Board, at the direction of the Chancellor, agreed to purchase these properties.

An issue must be raised concerning the purchase of these properties, and that is Board member and Chairman Damion Clinco’s role in placing these properties on the National Registry of Historic Places.

In 2008, Mr. Clinco is listed as a Principal in the filing submitted by Frontier Consulting Group LLC to the Arizona Corporation Commission (exhibits 1).

In 2012 he was listed as president on the Tucson Historic Preservation Foundation Annual Report form submitted to the Arizona Corporation Commission (Exhibit 2.)

The Historic Property Inventory forms (the Tucson Inn, Frontier Motel and El Rancho Motor Inn aka Copper Cactus) were submitted in 2012 when Mr. Clinco was the CEO of Frontier Consulting Group LLC and the President of the Tucson Historic Preservation Foundation (Exhibit 3 A-C).

In addition, it should also be noted that Mr. Clinco, acting as CEO of Frontier Consulting Group LLC was the author of a 2009 study for the City of Tucson entitled, Historical Miracle Mile-Tucson Northern Auto Gateway: A Historic Context Study for the Oracle Area. All of the properties purchased by the College are included in study. (Exhibit#3)

On May 2, 2018 Ms. Allison Diehl, of the City of Tucson Historic Preservation Office informed the College that the Tucson Inn had been placed on the National Registry of Historic Places on December 11, 2017 (Exhibit 3A).

This was approximately 3 months after the College had purchased the Tucson Inn and the Tucson Hotel & Resort. The fact sheet accompanying Ms. Diehl letter states that the City of Tucson and Frontier Consulting Group submitted the nomination. Exhibit # 3A) In addition, Mr. Clinco is identified on the Historic Property Inventory form submitted for the Tucson Inn (Exhibit 3A).

At the time the College received Ms. Diehl’s letter indicating the placement of the Tucson Inn on the National Registry, Mr. Clinco was the Chairperson of the Pima Community College District Board of Governors, the Executive Director (paid employee) of the Tucson Historic Preservation Foundation, and the CEO of Frontier Consulting Group LLC as there is no record of a change in his position in filings with the Arizona Corporation Commission.

The allegation of the appearance of a conflict of interest is certainly appropriate in this case. On the Tucson Historic Preservation Foundation webpage, Mr. Bill Ward, Vice Chancellor Facilities for Pima Community College is listed as a past Board member of the Tucson Historic Preservation Foundation further bringing into question the conflict of interest question concerning the purchase of these properties. (aka William R. Ward II) serving from 2014 to 2018.

I wish to make it clear that this communication, in my opinion, suggests that there is the appearance of a conflict of interest on the part of Mr. Clinco, which constitutes a violation of Pima College Board policy and possible violations of  A.R.S. §§ 38-501 to -511, as well as  the HLC Commission’s Criteria for Accreditation and Assumed Practices.

Mr. Clinco should have recused himself from any and all votes pertaining to the purchase of the three historic properties for which he had been involved as a consultant and CEO of Frontier Consulting Group LLC, President of the Tucson Historic Preservation Foundation, and Chairperson of the Pima Community College District Board of Governors.

Ethical behavior should not be based upon others informing  the college of a conflict, Mr. Clinco was only too aware of the historical record concerning his involvement with these  properties.  (EXHIBIT #4-More Info.) 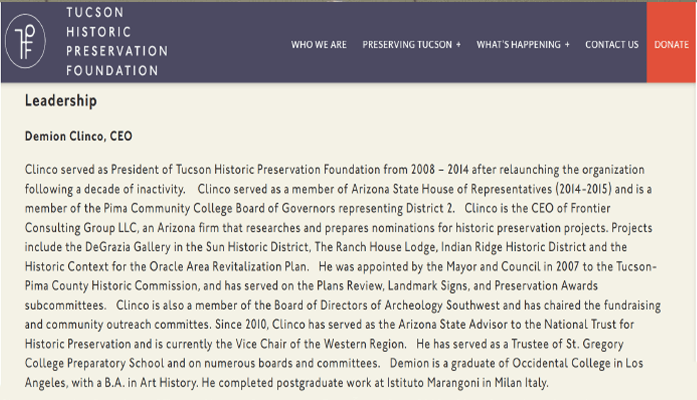