PHOENIX — A Democratic Arizona State legislator is reportedly unhappy because the infanticide bill she formerly sponsored is set to be heard in the Judiciary Committee Wednesday.

Apparently Raquel Teran, D-Phoenix, the primary sponsor of the bill, has changed her mind and no longer wants to support a bill that allows babies to be killed after they are born alive.

In a Facebook message posted 9:26 p.m. Tuesday,  Jermaine claims that Teran has informed her fellow Democrats that “her bill goes beyond a repeal of Senate Bill 1367, which was an error and does not reflect her intent.”

“I do not support the bill in its current form and have removed myself as co-sponsor ,” Jermaine wrote on Facebook.

Jermaine complains in her Facebook post that House Judiciary Chairman John Allen is not allowing Teran to amend the bill she formerly supported.

Teran has been silent about her change of mind about the law.

Senate Bill 1367, signed into law in 2017, mandates that a baby who is born alive as a result of a failed or botched abortion must receive medical treatment to save his or her life.

The new Democratic House Bill 2696 reverses that requirement so that a baby born alive can be left to die, however long that might take.

The Republicans hold a 31 to 29 majority in the House, so even if all the Democrats voted for this bill to take the lives of babies who survive abortions, it most likely will not succeed.

This new Democratic bill is part of a nationwide push to allow abortion providers to perform abortions up until the moment a child is born or even after an abortion fails, to take the life of the baby.

In New York State on Jan. 22, shortly after the Democrats took control of the state legislature, Gov. Andrew Cuomo signed a bill allowing late term abortions at any time, to the cheers of the lawmakers. Several other states have followed suit, introducing other bills lifting restrictions on later term abortions in the wake of Democratic victories in the 2018 election.

Democratic Gov. Ralph Northam of Virginia, during a radio interview about that state’s proposed bill to support late term abortion, advocated for abortion after delivery in some cases. A firestorm of protest from conservatives nationwide ensued, which led to a former classmate exposing the fact that he placed a photo of himself in blackface or a KKK robe on his medical yearbook page when he was 25 years old.

Apparently Teran received word that infanticide is not popular with most Americans, including Arizonans.

“Pollsters say that Democrats should try to avoid the topic of ‘late-term’ abortions. While taxes on top earners and Medicare for all poll at well over 50 percent approval, just a tenth of Americans consistently support abortion in the third trimester (which starts at the 28th week of pregnancy),” according to a report by CNBC.

Attempts to reach Teran were unsuccessful. Tehran was only posting only pictures of ASU Day at the Capitol on her Facebook page. The Arizona Democratic Party’s Twitter and Facebook accounts are silent on the subject of their infanticide bill as well. 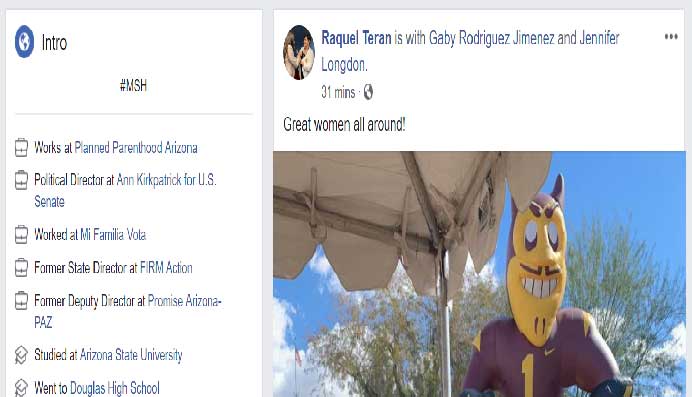 Teran, a former Planned Parenthood employee, “has informed us that her intent with the bill was to repeal the 2017 fetal resuscitation bill (Senate Bill 1367) and return that decision to the mother and her doctor in the difficult instance of a miscarriage after 20 weeks,” Jermaine wrote in her post.

Jermaine claims that Teran “has apologized and has asked to withdraw the bill, which the House Judiciary Chairman John Allen is not allowing her to do or to amend to reflect her true intent.”

However, lawmakers question how an employee of Planned Parenthood could not have recognized flaws with the bill prior to it being assigned to be heard in committee.

Jermaine says she does “not support the bill in its current form” and has removed herself as a co-sponsor. Jermaine is calling on her supporters to demand that  Allen “hold the bill.”

From the legislative record:

Repeals requirements regarding the treatment of an aborted fetus or embryo delivered alive.

Pursuant to statute, DHS requires that, for an abortion performed at or after 20 weeks’ gestational age:

1. An abortion clinic must designate someone to contact emergency services immediately upon birth in order to transfer the fetus or embryo to a hospital;

2. At least one person trained in neonatal resuscitation must be present in the room; and

If treating an aborted fetus or embryo would only temporarily prolong the act of dying, the aborting physician does not have to provide additional treatment beyond the DHS requirements (A.R.S. § 36-2301). Otherwise, the physician must utilize all available means and medical skills to keep the fetus or embryo alive.

Statute authorizes the surviving mother, father, and in some cases maternal grandparents, to sue a noncompliant person or entity for:

2. Relieves DHS of the duty to establish rules regulating the treatment of aborted fetuses and embryos delivered alive (Secs. 1 and 3).

3. Relieves physicians, clinical staff, and aborting entities of the duty to document and report whether an aborted fetus or embryo was delivered alive and the efforts made to keep the fetus or embryo alive (Secs. 2 and 3).