The luxury student apartment building Urbane, at the northwest corner of the University of Arizona campus, was without electricity on several floors from last Friday until 10.30 p.m. Tuesday, when a crew from Tucson Electric restored full power to the building.

Many residents had to live with a flashlight in hand — or stay in a hotel, which Urbane management paid for.

The outage was confined to floors three through six, residents said. Residents estimated that about 200 of the building’s 300 residents were affected, as the bottom two floors had power.

The Urbane apartments at the University of Arizona rent for between $950 and $1,530 a person, depending on floor size and amenities.

On Saturday, residents received an email from Urbane, saying that management was still trying to figure out what was going on but that residents might wish to seek alternative housing.

“They offered comped hotel rooms, but if you took the hotel room you would not be comped for anything else,” Alexander said. “Fast-forward to Sunday without power, and people are starting to freak out. We have no hot water in our showers and everything in the fridge has to be thrown out.”

Another resident, Sienna Leone, a senior journalism student, said: “We’ve heard so many different stories as to why this happened. We’ve heard stories from when it was snowing everyone turning up their heat at the same time, to construction workers accidentally cutting an electricity cord.”

Building managers could not immediately be reached for comment on what had caused the outage.

Leone added, “This has been a really big inconvenience as this is a couple days before Spring Break, you know. We all have tests.” Until power was restored, students had trouble charging their phones and “blow-drying our hair. It’s just been quite the mess.”

Alexander said the situation was frustrating but she recognizes that things happen.

“Students are frustrated but I want to make it very clear that Urbane is doing an amazing job on accommodating the residents,” Alexander said. “They are offering free lunch and dinner, offering the hotels, and figuring out how much each resident will get in reimbursements in the form of gift cards,” for things like spoiled food.

On Monday, Greystar issued this statement, according to KVOA-TV in Tucson:

“During the cold weather over the weekend, Urbane experienced power outages due to high levels of electric usage. Work crews and Tucson Electric have been working around the clock for three days in effort to restore full power to the building.

Immediately upon learning of the outage, we communicated with residents about the steps we have been taking to address the situation. In addition, we provided students with the following:

–If residents find alternate accommodations (with family or friends), we are providing compensation in the form of gift cards for every night they are unable to stay in their apartment.

–If residents are not able to find accommodations on their own, Urbane will book and pay for the residents to stay in a hotel.

–We have provided meals to residents during the duration of the outage.

We are taking every possible step to restore power immediately, and we will continue to provide housing and meal vouchers to the residents until the issue is resolved.

We thank our residents for their continued patience during this situation.” 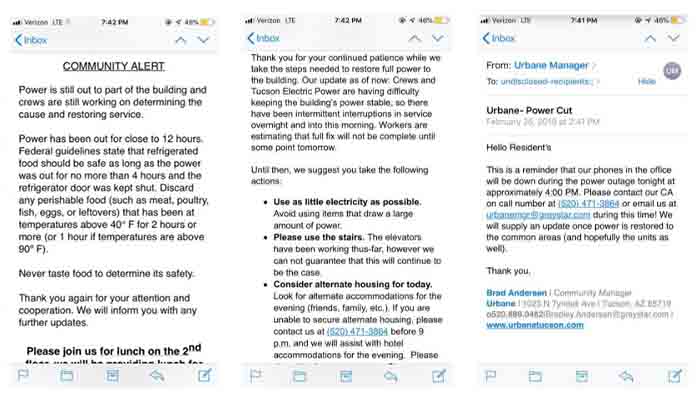