TUCSON  — Judge Gus Aragon’s downtown Tucson courtroom was filled to capacity Monday for a hearing in the trial of Daniel Zaroes Brito, who was arrested on robbery charges Nov. 3 for attacking Jonathan Sparks for urging people to vote Republican in the midterm election.

Grand Jury testimony was provided to Judge Aragon regarding the attack of Jonathan Sparks on 4th Avenue in front of witnesses.

Both sides agreed that Sparks was attacked from behind as he wore a Make America Great Again hat and held a pro-Republican sign, Vote Jobs not Mobs – Vote Republican, in downtown Tucson.

The hat was grabbed from Sparks from behind and when he tried to retrieve it Sparks was thrown to the ground by his assailant, 42-year-old Daniel Zaroes Brito, a Legislative Assistant to U.S. Rep. Raul Grijalva, D-Tucson, in Washington, D.C.

Brito, a Democrat, was heard shouting things about ‘Hitler’, ‘Nazi’ and ‘Trump’ at Sparks during the incident, making it clear he was attacking Sparks for his political beliefs.

LinkedIn shows Brito works as a Legislative Assistant to Congressman Raul Grijalva in DC. Brita did not return from Maryland for his hearing today and may be called to at least Skype into future court proceedings, his attorney said. 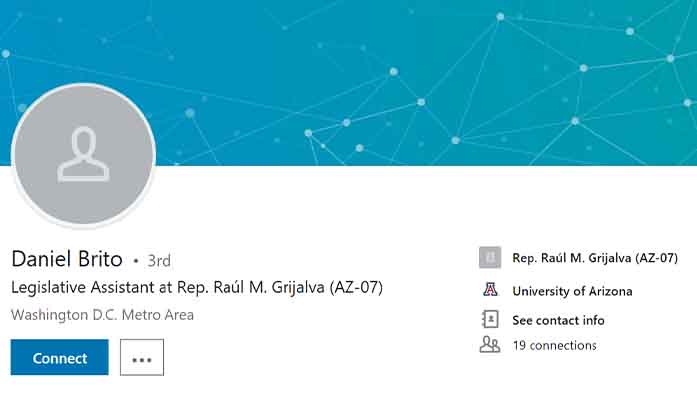 Brito did not return from Maryland for his hearing today. He may be called to Skype instead of appearing at future court proceedings, his attorney said.

Sparks said he was wanted to share his enthusiasm for a “fantastic president.”

“I think that intolerance to his ideology was the flame,” Sparks said of his assailant.

Sparks said he believed circumstances would have been different if he was holding an anti-Trump sign.

Both sides agreed Brito grabbed Spark’s MAGA hat, the two spun around and Sparks fell to the ground attempting to retrieve his property. Sparks broke his ankle in four places.

Brito later claimed he was diagnosed with a concussion.

What was not mentioned in the courtroom was the report by witnesses that Brito walked away and returned a second time to continue punching Sparks, as he lay on the ground with a broken ankle.

It was also not mentioned in the courtroom that Brito had to be pulled off Sparks by bystanders or the attack could have been much worse.

Judge Aragon suggested the parties hold a settlement conference before the next hearing, scheduled for 9 a.m. April 29.

The defendant had previously offered the state a settlement that was declined.

Observers in the courtroom left indignant with the idea of a possible settlement. Some of the attendees questioned why such violent acts, for obvious political reasons, did not carry an additional charge of a hate crime.

Sparks reportedly told Fox News he learned something from the attack, that people cared enough about him to pull the attacker off him. Also paramedics stayed with him and a police officer protected him.

“I was attacked with vengeance by an evil man,” Sparks said. “You know what God taught me through the whole thing? How wonderful Tucson is.”