DEMING, N.M. — Before Ed Ashurst moved to a ranch in Cochise County 20 years ago, he had no idea of the extent of the traffic from illegal immigrants trudging across the land almost every day and night.

Since then, Ashurst, 67, who lives with his wife, Jean Ann, near the New Mexico border, has become one of the most prominent spokesmen on border issues.

He has appeared on many TV news broadcasts, as well as attending meetings with political leaders locally and in Washington, D.C.

Ashurst, an author who has recently published an updated edition of “Alligators in the Moat” – his book which chronicles struggles, government betrayals and crimes along the southern international border – will be the featured speaker at a “Border Security Meeting,” to be held free of charge at 1 p.m. Saturday in Deming, N.M., at the First United Methodist Church, 1020 S. Granite St.

Topics that Ashurst will address include the origins of the caravans bringing thousands of illegal aliens into America, sex trafficking and why politicians fail to secure the border.

“I’m going to talk a lot about the caravans,” said Ashurst of the organized groups of thousands of illegal aliens, mostly from Central America, that have been pouring across the border. “I have two totally reliable sources that are saying the caravans are funded by (billionaire activist George) Soros and his affiliates and the U.N. The Mexican government is handing out pamphlets in south Mexico telling the aliens where to go, the seven best cities in America, sanctuary cities where to acquire asylum.”

He also plans to talk about a rancher who took initiative to stem the flow of illegal aliens.

“In Presidio City, Texas, a rancher with his own money has set up an expensive camera system and he has virtually stopped all the traffic on his ranch,” Ashurst said in a phone interview. “He has real time live pictures going into his house on a big screen TV. When aliens get caught on camera, he sees them and he gets the Border Patrol and takes them where they can arrest them.”

Ashurst said he will contrast this with John Ladd’s ranch near Naco, where the government has spent millions of dollars and the traffic has never stopped.

The author of eight books on ranching, faith and cowboy life, Ashurst said he recently released the updated version of “Alligators in the Moat” because there were new developments that needed to be addressed since Trump was elected. 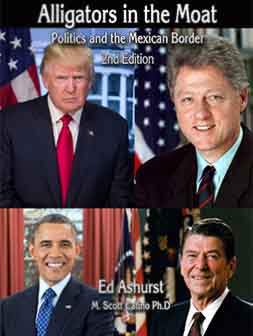 This riveting book, originally released in 2016, explores how amnesty laws have opened the floodgates of massive illegal immigration for the past 33 years. It tells the stories of several critical events, including the murder of popular rancher Rob Krentz, Ashurst’s neighbor and friend, by an illegal alien.

Russ Howell, the coordinator of the Saturday event, said Ashurst’s book contains the best explanation of what has been going on in the border region. She decided to hold this event after hearing Ashurst speak at a similar event several years ago.

“His presentation is very interesting,” Howell said. “He has done a lot of research on many subjects, and the cartels.”

The meeting, which includes several other speakers, is expected to last about three hours, with a question and answer session following all the presentations.

About Huey Freeman 6 Articles
Huey Freeman was a reporter at the Herald Review in Decatur Illinois. as a master’s degree in journalism from the University of Illinois. He is married to Kate Freeman, with four grown children. His books include: Who Shot Nick Ivie? Legendary Locals of Decatur