TEMPE – Two years ago, Cristian Zendejas was a preferred walk-on for the Arizona State football team, unsure where his role would take him.

Today, he is the starting kicker for the 17th-ranked team in the country that is preparing to play one of the biggest games of the season.

If anyone knows about expectations, it’s a Zendejas.

“I was worried that would probably make him try too hard to do something because of the name,” said Luis Zendejas, Cristian’s father.

Luis played in the NFL for three seasons, but it was his career at ASU for which he is best known. He was an All-American three times, and still holds the school record for field goals made in a season with 28 in 1983.

Additionally, Luis’ brother Alan kicked at ASU, and another, Max, kicked at Arizona. Their cousins Tony and Martin both kicked at the University of Nevada Reno, and Tony had an 11-year NFL career. Cristian’s cousin Alex was also a kicker with the Wildcats.

Now it’s time for Cristian Zendejas to be the next leg in this legacy while wearing an ASU uniform.

The sophomore has connected on 11 of 14 field goals this season and is expected to play a big role in the Sun Devils’ Pac-12 game at Utah on Saturday.

The role is firmly his after the surprise news last week that Brandon Ruiz was transferring. He was the team’s kicker in 2017 and 2018 but had sat out this season for what was called a lower extremity injury. 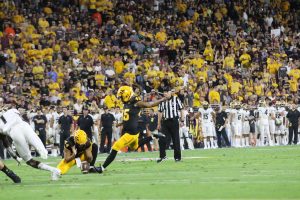 Zendejas started his career as a walk-on but received a scholarship in September. (Photo by Karrissa D. Herrera/Cronkite News)

Cristian, a local kicking prospect out of Gilbert’s Perry High School, played soccer growing up but surprised Luis in high school by saying he wanted to play football instead.
Cristian took a few visits before deciding where to go to school, but Luis knew that for his son, it was always ASU.
“He just loves football and the football family,” Luis said. “That’s my son. He’s always known.”

For Cristian, this meant a kicking competition, a battle he lost. ASU special teams coordinator Shawn Slocum said Ruiz has a combination of power and accuracy that is hard to match.

So Cristian was to serve as the backup and wait for his chance.

“I’ve really just kept my head down and kept working,” Cristian said. “I’ve used (Ruiz) as help. Just watching him every day because he is a great kicker and just learned that way and just got ready for my opportunity.”

That opportunity came in a way that no football player wants it to come: injury.

Before the start of the 2019 season, Ruiz went down with his injury and suddenly it was Cristian’s time to shine.

“Coach told me to be ready that night, just to be ready just in case no matter what,” Cristian said. “Went in at warmups, made all my kicks right down the middle and coach was excited for me, too.”

Luis said that he is always on the sidelines during the games watching Cristian and waiting for his son to get his moment. Cristian told his dad that he was starting the game 10 minutes before kickoff and Luis said two words: “Embrace it.”

Cristian went 3 for 3 in week one, 4 for 4 in week two – earning Pac-12 Special Teams Player of the Week honors – and he was 1 for 1 in week three. On Sept. 17, ASU coach Herm Edwards awarded Cristian with the Kevin Turner walk-on scholarship.

“It was the happiest moment for me, for him, because I know that he works so hard for it,” Luis said.

“You never know how a young man is going to respond until he gets in the moment,” Slocum said. “But I’m not surprised. He works extremely hard and he has a great foundation for what he is doing.”

When Luis heard the news, he said his first inclination was to do something and celebrate, but knowing Cristian the way that he does, he knew exactly what to do.

“His favorite thing is a Jack in the Box lava cake,” Luis said. “So I went over and got him the little lava cake and put it in the refrigerator and when he got home we just ate a little bit of it.

About Cronkite News 2412 Articles
Cronkite News is the news division of Arizona PBS. The daily news products are produced by the Walter Cronkite School of Journalism and Mass Communication at Arizona State University.