With the sports world on hold, Cronkite News will take a daily look at this day in sports history and reflect on some of the biggest moments in Arizona sports.

PHOENIX – On Opening Day in 2001, the Diamondbacks were a team loaded with veteran players and the dynamic one-two punch of ace pitchers Randy Johnson and Curt Schilling.

The biggest question around the team might have been how their most important rookie would perform.

Not on the diamond. In the dugout.

On this day in 2001, Bob Brenly made his major league managerial debut, guiding the Diamondbacks to a season-opening, 3-2, victory over the Los Angeles Dodgers.

Brenly had been the team’s television analyst for the franchise’s first three seasons, but prior to the 2001 season, the team’s skipper, the micromanaging Buck Showalter, was dismissed and Brenly came down from the broadcast booth and signed a three-year, $2-million contract to manage the club.

After nine years as a major league catcher with the San Francisco Giants and Toronto Blue Jays, Brenly retired and spent a year as an analyst in Chicago. He left that job to coach for four years with the Giants before returning to the booth when the Diamondbacks were added as an expansion team and played their 1998 debut season.

“Bob was one of our first hires in broadcasting, him and Tom Brennaman to do our television package.” said Scott Geyer, Diamondbacks vice president of broadcasting. “Starting our inaugural year in ‘98.”

But when Showalter was fired a day after the 2000 season ended, General Manager Joe Garagiola Jr. and Managing Partner Jerry Colangelo, knowing Brenly’s baseball knowledge, work ethic and attitude, turned to him to manage the ballclub.

“The relationship in being an analyst, everyday you go down and get to talk to all these other managers,” booth manager Scott Snyder said. “So, for years since Brenly had been with the Cubs, he had the ability to go down and just talk to other managers, watch how they operate, talk to the players about the other managers and then just watch games and see how they unfold from 30,000 feet. In other words, looking down not being in the bubble of the game.” 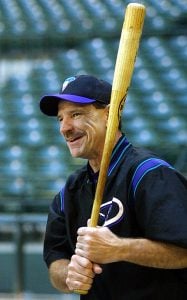 Brenly really “knew what motivated each and every guy, and that helps” former Diamondbacks player Luis Gonzalez said. (Photo by Mike Fiala/AFP)

Brenly was an ideal fit for a team laden with veteran players, and a stark contrast to Showalter, who was known to be a stickler for team rules. And he had a lot of them.

“One, he had watched them play and he knew the team. He also was a low maintenance broadcaster and he was a low maintenance person,” broadcast producer Mark Reda said. “So he wasn’t a ’jump in there and try to change everything.’ In fact, the manger before was a pretty much Type A … lots of rules and stuff like that and Bob was like, ‘Eh, let’s go out and play.’”

Former Diamondbacks outfielder Luis Gonzalez, who was a veteran slugger on that 2001 team, said Brenly “wasn’t one of these hands-on guys that was kind of controlling the throttle all the time. He knew when he had to talk to guys or just motivate guys and different things. I think he knew the characters that were on the team, and he knew what motivated each and every guy, and that helps.”

After nine seasons behind the plate in the big leagues, Brenly relied on his veterans, and let them know he had confidence in them to do their jobs.

“He created a really good system. He had really good coaches, he let the players play,” Reda said. “It was a veteran team that didn’t need some rah-rah guy.”

Geyer said that Brenly “did such a great job of coming in as a rookie manager, and keeping things very simple. He didn’t try to reinvent anything. He picked a great coaching staff. His bench coach, Bob Melvin, was perfect. They were like Batman and Robin. They were such a great team together.”

To Gonzalez, Brenly “had trust in the guys on the team, the veteran guys on the team that we had. He kind of just controlled the ship, just kind of guided the guys along and let the guys play – which just proved to be pivotal for everybody.”

On November 4, 2001, the Diamondbacks – in only their fourth season of existence – closed out the New York Yankees in a thrilling Game 7 victory at Bank One Ballpark to become the fastest franchise in major league history to win a World Series. And Gonzalez delivered the two-run, game-winning hit in the bottom of the ninth inning.

“I was just so happy for him,” Snyder said, “just knowing how much of a competitor he is.”

Brenly continued to manage the Diamondbacks until the end of his contract and then was dismissed after the 2004 season.

“He is one of the best people I’ve ever met,” Geyer said. “He’s just very humble, hilarious and original.”

Brenly’s roots run deep with the Diamondbacks, and if or when the team begins the 2020 season, he will be back in his familiar position, providing insight into a team he led into the baseball history book.

About Cronkite News 2612 Articles
Cronkite News is the news division of Arizona PBS. The daily news products are produced by the Walter Cronkite School of Journalism and Mass Communication at Arizona State University.