Like a lot of Arizona mayors, Mayor Jerry Weiers of Glendale is working extra hours to keep up with all of the COVID-19 related challenges city officials are facing.  Glendale, Arizona is a city of around 250,000 people and as Weiers recently told KFYI’s James T. Harris, it was one of the fastest growing parts of Arizona, with a booming economy, until the virus came along.

Weiers has a strong background in charity work and has been involved in helping worthy causes like food banks, local and national charities, and groups like the Shriners who help children get life-saving operations.  These connections have helped Glendale’s needy as the Mayor has been able to tap that network to help run successful food drives, blood drives, and more.

More recently, when Weiers heard that Glendale firefighters were in need of masks, he contacted others in the community and got a supply of them donated for the firefighters.  Which is where another feel-good story should have occurred.

Firefighters – first responder heroes in need– getting the masks they need to do their job more safely, thanks to a fast-thinking Mayor and generous community members. That’s the kind of story that encourages others to do more themselves and to give more.

Unfortunately for Glendale, the Professional Firefighters Association of Arizona doesn’t like Mayor Weiers, and they’ve been trying to knock him out of office for years, largely over union negotiating issues where the unions want greater power and Weiers, like other mayors, have pushed back.  They even ran a former fire chief against Weiers in 2016, spending heavily before ultimately losing.

According to Glendale’s City Manager Kevin Phelps, city staff asked the Mayor to drop the masks off at the Glendale Regional Public Safety Training Center the same day he received them from the donors, to one of the Deputy Fire Chiefs.  Phelps said the Center was selected “because it is closed and would not interrupt or interfere with any public safety operations.”  When the Mayor arrived he was greeted not only by the Deputy Chief, but several firefighters and one of their trucks. Judging by photographs of the event, the masks were well received and appreciated.

The union bosses seemed to be very unhappy that Mayor Weiers was getting favorable attention for taking care of his firefighters, so they launched an attack on their social media pages, claiming that Weiers “decided to have two critical frontline GFD units TAKEN OUT OF SERVICE and out of their first due to drive across the city to take pictures for a shameless re-election photo op.”  They tried to minimize the value of the masks, claiming they were “of limited value to first responders,” and declared “Mayor Weiers should be ashamed.”

Of course the union bosses never checked any of the details, or they would have known that the Mayor had nothing to do with any of those decisions – he was just trying to drop off face masks to keep his crews safe.

According to a statement from Glendale Fire Chief Terry Garrison, “On April 4, 2020 we had our Shift Commander place E150 and himself out of service to participate in a photo shoot with the Mayor at the GRPSTC. The Mayor did not request any units to be out of service and most likely would not even have known that they were out of service.”  And according to City Manager Phelps “Fire Administration, the Mayor and other city staff were unaware of this request.”

The Mayor of a city in need wanted to thank donors for helping out his firefighters, and a poor but well-meaning decision from a Fire Shift Commander turned it into a photo op to highlight the gift. That is hardly a mistake of real consequence.  Fire crews are never really off duty and any emergency that would have required their attention would no doubt have gotten it.

AZRepublic columnist Laurie Roberts gave the issue additional coverage, trying to implicate the Mayor in this union-constructed phony photo-op scandal.  To date, even after the Fire Chief himself made it clear that the Mayor had nothing to do with it, neither the union nor Roberts has corrected the record or retracted the accusations.

Eventually a news outlet decided to tell the truth. This week, the Glendale Star reported, “with COVID-19 accelerating in the population, some of the biggest changes for Glendale first responders include the use of personal protective equipment (PPE). … Glendale Mayor Jerry Weiers solicited donations of PPE—and members of the community responded, providing equipment to the Glendale Fire Department. Ashley Losch, spokesman for the Glendale Fire Department, says these items, vital to the job, have been hard to come by at times.”

It is clear that in Glendale, Mayor Weiers cares a lot more about his firefighters than their out-of-Glendale union bosses do. 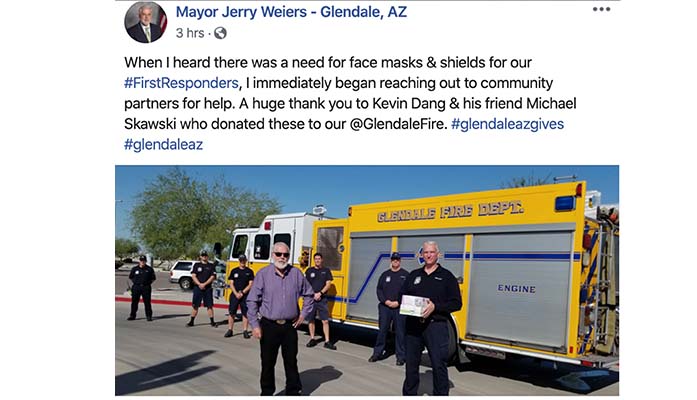 Also, here is the City Manager’s email with the Fire Chief’s below it…

Over the weekend, there were posts on social media and an opinion piece on AZ Central accusing the Mayor of making the decision to pull a fire unit out of service for a picture.  This is inaccurate.

The Mayor, knowing the need of face shields and masks, secured a donation of face masks from two members of our community that wanted to respond to the growing needs of our first responders.

City staff asked the Mayor to drop the masks off, at the Glendale Regional Public Safety Training Center (GRPTSC), when he received them Saturday morning, to one of our Deputy Chiefs that oversees the west area.  The GRPSTC was selected because it is closed and would not interrupt or interfere with any public safety operations.

A well-meaning fire employee subsequently, and without authorization, asked Engine Company 150, to also attend the drop off that morning, which subsequently pulled them out of service for this non-Fire Department related activity.  Fire Administration, the Mayor and other city staff were unaware of this request.

The Mayor’s social media pages were updated Saturday morning with a post thanking the community members by name for their donation and included a picture of the masks being delivered with the Fire engine in the background.  Unfortunately, the post drew swift criticism from the Professional Fire Fighters of Arizona (PFFA), in which they inaccurately accused the Mayor of making the decision to pull the fire unit out of service. The truth is, the Mayor was completely unaware that Engine 150 would even be at the hand-off to publicly thank the community member for their donation.

Please see the communication below from Fire Chief Garrison, detailing the steps he has taken to ensure that this does not occur in the future.

Please let me know if you have any questions.

On April 4, 2020 we had our Shift Commander place E150 and himself out of service to participate in a photo shoot with the Mayor at the GRPSTC. The Mayor did not request any units to be out of service and most likely would not even have known that they were out of service. Organizationally we have reviewed this incident and have corrected any misunderstandings regarding placing units out of service for non-fire department related activities. Furthermore, we have advised/educated our chief officers and staff to ensure this will not occur again.