While the personal life of current Maricopa County Sheriff Paul Penzone was well publicized by the Joe Arpaio campaigns of 2012 and 2016, his are not the only personal orders of protection voters will need to consider as they elect a Sheriff in 2020.  The Republican side of the race features three candidates:  Joe Arpaio once again, Jerry Sheridan, a 32-year veteran of the department and Arpaio’s former chief deputy, and Frank “Mark” Crawford, a motorcycle patrolman from the Glendale Police Department.

According to court documents that have recently been uncovered, Crawford was the subject of three separate Personal Orders of Protection filed by his then wife and later ex-wife.  Most troubling is the accusation of forced sodomy, although Crawford’s violent disposition contributed to two future orders that severely restricted and later prohibited his communication with his wife.  At one point he was even forbidden to drop his kids off like a normal father and was required to keep far enough away that he could only drop his kids at the curb so long as he remained in the vehicle.

During a video podcast with the Republican Liberty Caucus, in which the RLC announced that they were endorsing Crawford based on a lengthy questionnaire he returned and their interview process with him, Crawford described himself, saying:

“…I actually follow the law and obey the law, and you have to do that in order to enforce the law, you can’t be a hypocrite.”

It appears the RLC questionnaire did not ask candidates about any history of violence against women or if they did, Crawford did not answer honestly.

It is unknown at this time what, if anything, the Glendale Police Department knows about these incidents.  According to tweets from College Republicans United, these incidents may not have been reported to his superiors on the force.

At present, Crawford’s status on the 2020 primary ballot is up in the air.  His signatures have been challenged by Chris Hegstrom, Sheriff Arpaio’s former Director of Media Relations who later helped manage the Sheriff’s 2018 U.S. Senate campaign.  If Crawford makes the ballot, he will have a lot of questions to answer to voters about these newfound documents. 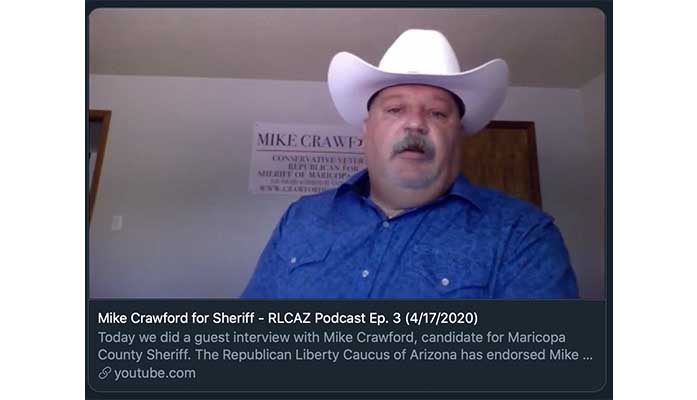 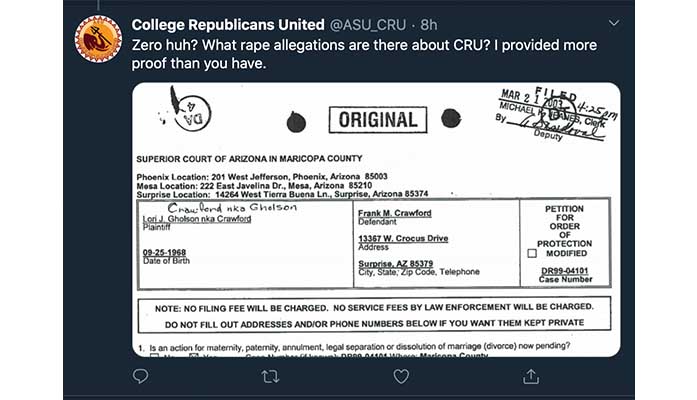