PHOENIX – A global pandemic and then weeks of flight restrictions have left many of the 370,000 Chinese students who study in the U.S. caught in a dilemma – stay put, or pay thousands to try to get home.

Yang Jiao graduated from Arizona State University in May but has been stuck in the United States ever since, due to the high cost of flights to China and restrictions that have canceled or severely limited air travel between the two countries.

He’s staying in California with friends and his mother, who came to visit him over the Chinese New Year holiday in January. After coronavirus was detected in December in Wuhan, China, Jiao’s mother was unable to return to her home in Tianjin.

Jiao said he’s spent more than $15,000 on airline tickets in the past few months but that unpredictable travel restrictions have left him and his mother unable to get home. It’s been a frustrating situation that’s caused both anxiety and anger and, for him, a feeling of being abandoned by the world.

“I was speechless with rage,” he said. “The only thing I urgently want right now is (to go) home with my mother.”

More than 1 million international students studied in the U.S. in the 2018/2019 school year, and China leads that list, with nearly 34 percent of the total, according to the Institute of International Education.

Nearly 7,900 Chinese students studied in Arizona, with Arizona State University the top draw for all international students in the state.

Foreign students in the United States have up to 30 or 60 days to depart after their programs end, depending on the type of visa, and that time limit has heightened worry among many and made it more difficult to find plane tickets home. Some face losing housing and jobs, along with their immigration status.

By the end of January, with more than 7,000 confirmed cases of coronavirus in China, thousands of flights in and out of the country were suspended – the beginning of a global air travel shutdown that left many stranded.

Then the three major U.S. air carriers – American, United and Delta – canceled all flights to mainland China, and the Trump administration barred travelers from China into the U.S.

“The Department will continue to press for the full restoration of passenger air travel between the United States and China, in part to allow for the repatriation of Chinese students who have been unable to fly home due to the shortage of flights,” read a June 15 statement by the Transportation Department. “As the Chinese government allows more flights by U.S. carriers, we will reciprocate.”

Third-party flights from other countries into China have also been limited.

“It’s too hard to find a straight flight right now,” Jiao said. “I bought eight tickets since March, but I’m not sure which one could take me home.”

Fengyu Zhou, who graduated from ASU in May, said he plans to stay for now and is applying for graduate school because he can’t go home.

Zhou also was anxious to return home after seeing attacks against Chinese students on the social media platform Sina Weibo, including: “You are poisoners!” and “Don’t go home. You have virus.”

“I was so sad when I saw these hate speeches,” Zhou said. “It’s so hard for me to suffer these abuses. I don’t know how to explain.”

Groups like Chinese for Affirmative Action in San Francisco have cited an “alarming escalation in xenophobia and bigotry resulting from the coronavirus/COVID-19 pandemic” against Asians in the U.S., and warn that such harassment could have long-term effects on mental health. 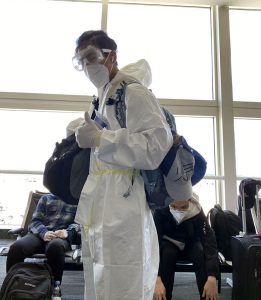 Sean Lai is a 10th grader at IMG Academy, a school for athletes in Bradenton, Florida. On June 6, he flew home. After a two-week isolation period, he’s now back with his family in Dongbei, China. (Photo courtesy of Sean Lai)

“If you are really isolated, that’s a hard situation to be alone,” said Theresa Nguyen, chief program officer for Mental Health America. She suggested that students find someone close to confide in. “It is important to try to reach out to people.”

To date, more than 84,000 cases of COVID-19 have been confirmed in China, and more than 2.5 million have been diagnosed in the United States, according to data collected by Johns Hopkins University.

Sean Lai is a 10th grader at IMG Academy, a school for athletes in Bradenton, Florida.

“The pandemic,” he said, “definitely slowed down my life, but it also gave me enough time to think about my future.”

His parents are doctors, he said, and offered advice to him to stay healthy while he was in the United States. But Lai was one of the lucky ones: On June 6, he was able to return home. After a two-week isolation period, he’s now back with his family in Dongbei, China.

About Cronkite News 2841 Articles
Cronkite News is the news division of Arizona PBS. The daily news products are produced by the Walter Cronkite School of Journalism and Mass Communication at Arizona State University.