The recent dust-up created by false claims made by Legislative District 6 candidate Wendy Rogers about endorsements has led to confirmation that in fact, Rogers has not been endorsed by the AZ Citizens Defense League.

The confirmation has come as a relief to some, who were concerned that the non-profit organization had violated the law by endorsing a candidate.  It was, however, a blow to Rogers’ supporters who had hoped to use the distinguished organization’s reputation to sell their candidate.

At issue is an endorsement of Rogers by an unaffiliated organization, AZ Citizens Defense League PAC, an organization operated by Drake Mitchell.

Mitchell, Rogers, or both were behind a mailer sent to Legislative District 6 voters illegally displaying the AzCDL logo without its permission: 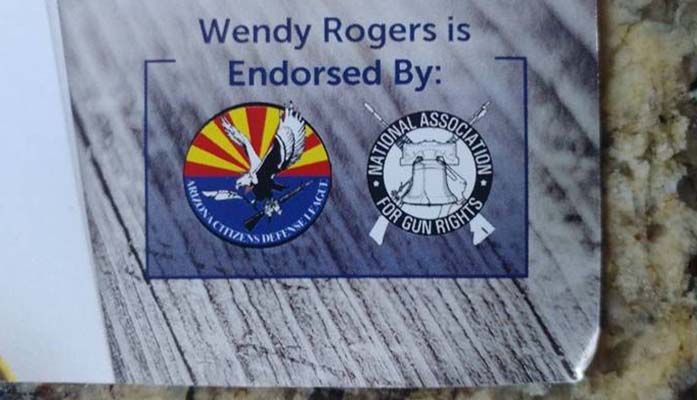 The Arizona Citizens Defense League (“AzCDL”) sought to clarify its position as it issued two emails to its more than 18,000 members, one on February 24 and a second on July 4 regarding its PAC.  Relevant excerpts are displayed:

After careful consideration, the Board of Directors of the Arizona Citizens Defense League has decided to discontinue our Political Action Committee. All associated activities, including the PAC website and Facebook page, PAC candidate ratings, and PAC fundraising will also cease. Legislative voting records will continue to be produced by AzCDL and made available each election year. …. The PAC will be shut down in accordance with Arizona law and all remaining contributions will be distributed to appropriate pro-rights candidates for office.

While AzCDL appreciates the support of elected officials and candidates that support us through their AzCDL memberships and efforts at the Legislature, it has come to our attention that some candidates for public office are claiming that they are endorsed by AzCDL.  Unfortunately, those statements are erroneous.

The Arizona Citizens Defense League does NOT endorse any candidate for public office or get involved in any elections.  We are no longer associated with any political action committee, and do NOT give our permission for any candidate, political committee, or other entity to use our name and logo for any purpose.  Any claim of an endorsement from the AzCDL, or any use of our logo for such purposes, should be considered illegitimate, and subject to potential legal action.

On July 7, the Yellow Sheet also posted that “Wendy Rogers is under fire in LD6 for falsely claiming endorsements from residents who said they never endorsed her and a gun rights group that has not endorsed anyone this year.  The Arizona Citizens Defense League disbanded its PAC earlier this year (Yellow Sheet 02/25).  The group sent its members a statement that doesn’t name Rogers but emphasizes that it does not endorse any candidates and will sue candidates who claim endorsements.”

Sandee McKinley posted “Just want to share that this (Rogers) is Sylvia Allen’s opponent. She has posted that these four men in our community have endorsed her.  All four denied giving an endorsement or permission.  She also lives in Tempe and is running in our district from a 2nd home in Flagstaff, which by the way she has both homes listed as primary residences.  That is not honest or legal. They will catch up with her.  Wendy is a 5-time loser, she has never won a race.  We need to support Republicans that can win… Sylvia is the winner here :)”

ADI reached out to Dwight Kadar, a Yavapai County Precinct Committeeman and Arizona Congressional District 1 Delegate to the RNC National Convention next month in Jacksonville, Florida for a comment.  Kadar said, “In my opinion, it’s all about a pattern of unethical behavior displayed by the Rogers campaign, which has been caught numerous times falsifying endorsements.  And now, the Rogers campaign has resorted to illegally claiming an endorsement by AzCDL on its recent mailer.  Anyone who is willing to blatantly lie in a campaign, should never be elected to office.  Maybe this is why Rogers, who has run for office for the past ten years, has never won a general election race.”