By Mike McQuade and Brett Bavcevic

PHOENIX – When his high school coach reached out for a jersey donation, Arizona Cardinals kicker Zane Gonzalez was on board. Soon, however, he decided it wasn’t enough.

As he watched the COVID-19 pandemic affect families financially in his hometown of Deer Park, Texas, Gonzalez, a former standout at Arizona State, decided to provide scholarships for four young athletes.

“Just something to help and with everything going on. It’s the least I could do,” Gonzalez told Cronkite News Thursday. “I remember growing up as a kid. I struggled as well making ends meet. It kind of hit home a little bit.”

Unemployment hit 14.7 percent in April, a post-World War II record, according to the Bureau of Labor Statistics. In February it was as low as 3.5 percent. June posted a 11.1 percent figure.

All four young athletes play soccer, the sport Gonzalez said he loved the most growing up.

He understands the struggle many parents are facing. During a part of his high school years, he lived in a one-bedroom apartment with his three siblings.

“I mean, it’s just one of those things where they’re happy to see their kids happy playing the sport they love, and seeing the kids happy, makes everybody happy,” Gonzalez said.

The Arizona Coyotes, along with 23 other NHL teams, are inching closer to the resumption of the 2019-20 season that is set to begin on August 1 with the qualifying round.

It has been 120 days since play was suspended due to an outbreak of COVID-19 cases around the world, and Coyotes captain Oliver Ekman-Larsson is ready to return to the ice with his teammates.

“We have been away from each other for a couple months here, so I think everybody is excited, but at the same time this has been bigger than hockey,” Ekman-Larsson said.

Ekman-Larsson recently returned to the United States after spending the pause in his home country of Sweden with family and friends.

“I’ve been in town for almost two weeks now, so I had to quarantine for a week and do some corona testing here, but I’m finally back on the ice,” he said. “I feel like I’m stronger and I’m in better shape than when I left.”

Ekman-Larsson pointed out adjustments that he had to make upon his return from Sweden, as the actions taken to combat COVID-19 in that country differ from those in the United
States. 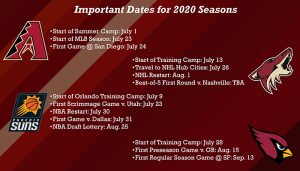 After news broke that the Big Ten will play a conference-only football schedule in 2020, it appears the Pac-12 is headed in the same direction.

The Athletic’s Nicole Auerbach posted on Twitter Thursday that multiple industry sources told her “they expect the Pac-12 to go to conference-only scheduling as well in the coming days.”

If that’s the case, Arizona State’s game with Northern Arizona, UNLV and Brigham Young would be eliminated and it would start the season on Sept. 26 at USC. Arizona had non-conference games scheduled against Hawaii, Portland State and Texas Tech.

ESPN reported Thursday that Big Ten presidents and athletic directors are close to approving no out-of-conference games for their teams, eliminating some long-distance travel and helping ensure more safety measures during the COVID-19 era. That would mean canceling some highly anticipated games, including Ohio State at Oregon.

The Pac-12 has not responded to reports but commissioner Larry Scott said during a recent podcast with the NCAA’s Andy Katz that “we have tried to be careful to not make decisions to get locked in earlier than we need to. We are learning a lot quickly and (the situation) is rapidly changing.”

The Maricopa County Community Colleges District has scheduled a virtual community forum at 5 p.m. Thursday to discuss the recent recommendation of the system’s 10 college presidents to temporarily suspend athletic programs during the COVID-19 pandemic.

Interim Chancellor Steven R. Gonzales will host the event in collaboration with the Maricopa Center for Learning and Innovation.

Details can be found at https://events.maricopa.edu/event/athletics-forums.