On August 4th, a little more than two weeks from now, voters in Gilbert will decide whether they want unions to decide their local elections or not. While it’s not uncommon for government unions to endorse and financially support political candidates, it’s rare that such backing doesn’t create a serious conflict of interest and even ethical questions.

All of us in Gilbert value the amazing work that our first responders do on a daily basis. Anyone that’s willing to put themselves at risk for us is deserving of our appreciation and respect. That’s why I am a proud supporter of the women and men in our police and fire departments. The unions that have endorsed candidates in Gilbert’s race, however, are only interested in protecting and increasing their pensions at taxpayer expense.

Gilbert residents are smart. They know that “Endorsed by Fire & Police” really means that government unions endorse those candidates.

This time around, even supporters of the school district unions are getting involved, even though the Town Council has no power in the governance or operations of school districts. 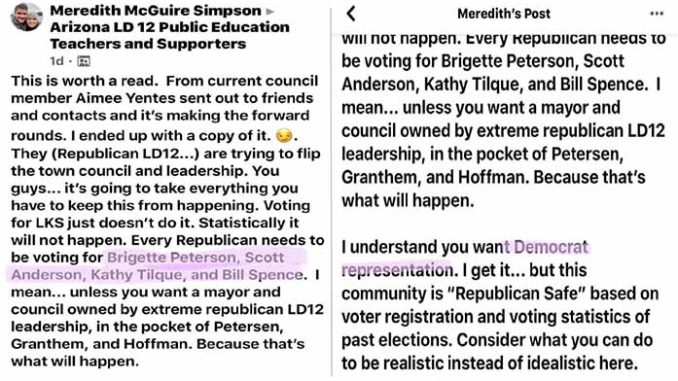 It’s worth noting that many families in our town exercise some form of school choice, whether that’s homeschool, ESA, charter school, intra- and inter-district enrollment, or private school choice. What does this mean? It means that Gilbert families want to be free to choose where they send their children to get an education. They don’t want any unions telling them what they can or can’t do.

Why are these unions so determined to influence our town’s government?

Unions want every elected leader, at every level of government, to be union activists. They want more power and influence in government wherever they can get it in order to guarantee they funnel as much taxpayer money into their pensions as possible. The more influence they have, the more money they get.
You can send a clear message to these government unions at the ballot box. Vote for candidates who are committed to small government and low taxes. Vote for candidates who will represent the interests of residents rather than the interests of government unions.