On Tuesday, the owner the Viva Coffee House was led out of the Pima County Board of Supervisors meeting in handcuffs for merely reading the foul and threatening messages he received on social media after County officials placed his business on what has become known as the “Wall Of Shame.”

Chairman of the Board of Supervisors, Ramon Valadez, who was rejected by voters during the 2020 Democratic Primary, would not allow Mr. Walker, owner of the Viva Coffee House to proceed with his comments even after he explained the origin of the comments and that he would not repeat the foul language.

Valadez, ordered the reluctant deputies to escort Walker out of the meeting room. While Walker was being handcuffed, the arresting officer told him not to “resist.” In response, Walker said, “I am not resisting, I am just strong.”

As he was marched out of the room, he shouted “U.S.A.”

In an email sent to the supervisors prior to the meeting, Walker explained how his company came under attack:

I am one of the owners of Viva Coffee House here in Tucson, Arizona . We have been in operation for about two years, and have always been diligent to keep our health standards high and cooperate with the County Health Department, enjoying a good relationship.

Over the months of the Pandemic, we have done our best to understand and implement shifting, often confusing proclamations, delegations of enforcement, etc. We even put out tables and distributed food and supplies to people in our community.

I’m writing because the Health Department has been negligent in its enforcement and cause irreparable damage to our business. Because they set up a public “shaming site,” our family and staff have been subjected to threats of violence, harassment and “cancel culture.” The department had been praising us for months for our compliance. We have been diligent to communicate with them and publicly announce our responses to each new proclamation. Then they threw us to the dogs in the midst of a very dangerous and volatile time.

Recently, a woman came in and took photos of a handful of mothers and children enjoying food and drink, despite several of them denying their consent to take their photos. I immediately email our county inspector about it, with photo evidence , confirming no one was out of compliance. he falsely claimed there were 40 people in our shop wearing masks and that we have a “no ma k policy.” The inspector later claimed that she conveniently didn’t receive these specific emails.

Based on an unsubstantiated complaint, she made an unscheduled visit. We went over some minor items that could use improvement, such as switching from a peroxide-based cleaner to a bleach-based one. Nothing was major. She had to call her supervisor several times to clarify things because even she didn’t understand all the regs (so how are WE supposed to?). We implemented these changes within a few business days and sent photos, receiving an email that we are in compliance.

Unbeknownst to us, rather than acknowledging our good faith longstanding efforts, and in spite of my meeting with her personally and diligence to implement suggested improvements, we were put on a public non­ compliance list without warning, notification or any period of time to address these minor issues. In a time when businesses and individuals are being targeted, threatened, windows smashed, etc., this was unacceptable and out of line, to say the least. Even after confirmed compliance, we were told it could take up to a week to remove us from the list. Despite my requests, the county did NOTHING to address the persecution and threats.

Because of this, we received an overwhelming barrage of hateful messages, false reviews, threats of physical harm and so on. Much of Tucson got the false impression that we were purposely defying the county and doing NOTHING to help protect people’s health. Our families and baristas were afraid for their lives.

As a result of this detestable targeting of our business, I told an inspector who again showed up for a surprise inspection to leave the premises and not return. We will not tolerate the county supporting endangerment of our people and slandering of our business.

If you would like to sit down and discuss this with local small business and make necessary changes, as well as issue a public apology, we will resume our relationship with you. If you do not, you can expect a class-action lawsuit and the overwhelming peaceful protest of the thousands of people who support our business and know we are good people with a heart for the community. Per the governor’s orders, penalizing a business without first providing education and a means to address issues is prohibited.

In the meantime, the Health Department is suspended from the premises of our business and we will self­manage until such a time as they begin doing their job ethically and in the best interests of the small businesses that serve our people. As it is, you WILL be hearing from concerned and supportive citizens, and I will be applying my talents in PR and marketing to discuss this with the media.

Attached are one of our emails to the county inspector, verification of compliance, and screenshots of just some of the backlash we received due to the Health Department’s adversarial approach. 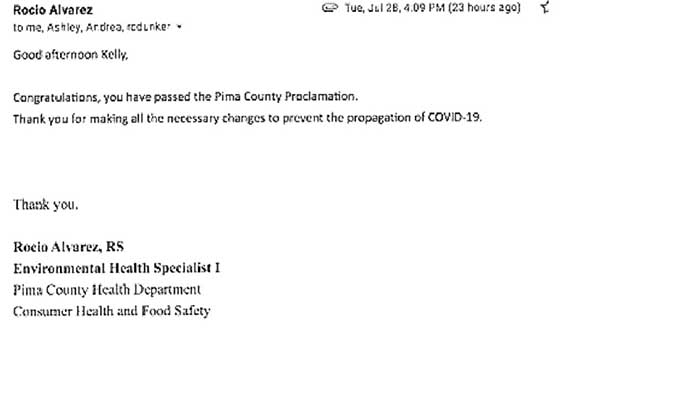 About John Backer 26 Articles
John Backer is an expert in cyber-security with over 30 years experience in the field. A popular activist in southern Arizona, Mr. Backer is often heard on local radio.