With the outbreak of large wildfires in California, the “mainstream” media is once again blaming it on global warming. However, the real evidence shows that the main causes are bad forest management, failure to clear brush near power lines, arson, and accidents. Note that ancient native Americans did controlled burns to manage the forest and make it more habitable for animals they hunted. But now, controlled burns and clearing brush are politically incorrect. 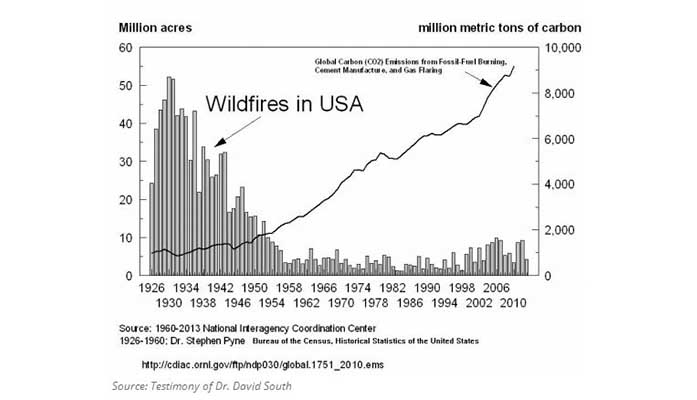 Here are some recent articles on the wildfires.

How do we focus our resources to minimize the devastation caused by California’s wildfires? First, we can reduce ignitions. California’s deadliest fire, the Camp Fire and California’s 2nd largest fire, the Thomas Fire were ignited by faulty powerlines during high wind events. California’s sprawling power grid has rapidly expanded since 1970 to accommodate the influx of 20 million people. Accordingly, powerline-ignited fires increased area burnt by five times relative to the previous 20 years.

In contrast, the August 2020 fires, which will likely rank in the top 10 of burned area of California, were all naturally started by an onslaught of dry lighting. (Read more)

Here are some of the more intelligent articles that I’ve seen on the California fires. (Read more)

This 1994 article from the New York Times (back when NYT still did journalism) puts things in perspective.

California can either manage its forests better or watch them burn for another 200 years, according to the New York Times. All you need to know about California drought and wildfires:

Beginning about 1,100 years ago, what is now California baked in two droughts, the first lasting 220 years and the second 140 years. Each was much more intense than the mere six-year dry spells that afflict modern California from time to time, new studies of past climates show. The findings suggest, in fact, that relatively wet periods like the 20th century have been the exception rather than the rule in California for at least the last 3,500 years, and that mega-droughts are likely to recur. (Read more)

See also the following articles from my blog to gain more perspective.

Mega-fires in Southwest due to forest mismanagement

Wildfires and Warming – Relationship not so clear