PHOENIX – Johnny Walker is quite particular with his hockey stick.

The Arizona State forward wasn’t happy with his shot at a morning practice last season and marched into the office of equipment manager Jon Laughner with a puzzled look on his face.

“Grab somebody else’s stick,” Laughner said. “That’s what they would do in pro hockey. You’re not feeling it with your stick. Just grab something that feels good to you.”

Of all the sticks on the rack, Walker didn’t find anything to his liking. Wedged behind the door, Walker discovered one with “Laughner” etched on it.

He put Laughner’s and his own stick side by side and said, “Do you have any more?”

“Well, I guess you better go get them,” Walker said.

Laughner drove to his home in North Phoenix and back to the rink in time for puck drop.

“I didn’t get to eat lunch that day,” Laughner said.

Laughner was not the only one hungry that night. Walker scored a hat trick with Laughner’s stick, leading the Sun Devils to a 4-1 victory over the fourth-ranked University of Denver at Oceanside Ice Arena.

“I’ve got my stick with his name on it,” said Walker, who leads all active NCAA players with 60 goals. “It’s the one I use now.”

From peewee to pro, each hockey player’s stick comes down to personal preference in every aspect.

“It’s the most personalized item there is in sports,” Laughner said. “Football doesn’t really have an equivalent. There are baseball bats, but what can you really change besides the weight and the handle. Hockey sticks are really unique in sports.”

At first glance, hockey sticks look the same with the lightning pace of the game on the ice, but that’s not the case.

“It’s all about personal preference,” Arizona Coyotes forward Clayton Keller said. “I’ve used pretty much the same curve my whole life. I always use a short stick. My flex has gone up a little bit, but I’ve pretty much used the same feel for my entire career.”

Flex, which is the amount of pressure required to bend the stick one inch, has the biggest impact on a shooter’s release.

“It’s trying to find that sweet spot of still having control but where you’re not taking away from your shot by any means,” Walker said. “If it’s too small, it’s tough to get enough flex or whip on it, which can affect your shot.” 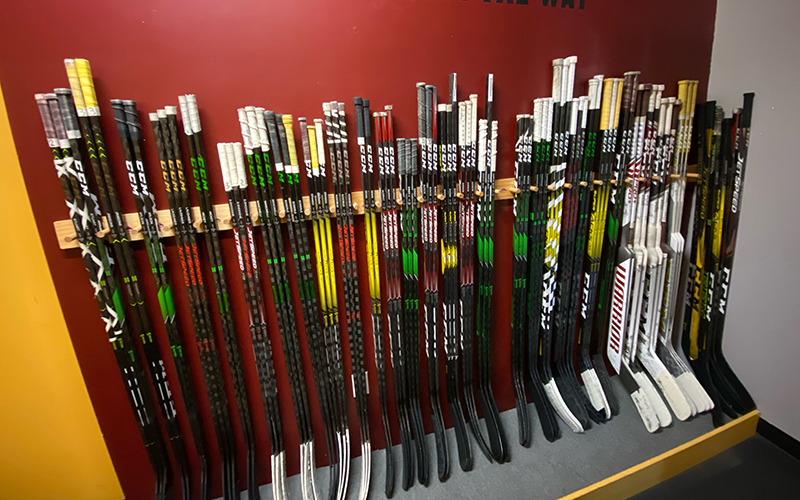 The size of the stick is important to hockey players but so is its flex. (Photo courtesy Jon Laughner/Sun Devil Athletics)

“Flex is not necessarily for passing, but for the way that the puck hits off the stick, you want it to have some give,” ASU junior goaltender Evan DeBrouwer said. “ You don’t want it to have that deadwood feeling. You want it to pop up your stick and go to the corner. That’s something that I’ve had to work with.”

When DeBrouwer arrived in Tempe, he went through an adjustment period with the school’s CCM brand.

“I went through eight sticks by Christmas and wasn’t happy,” DeBrouwer said. “Jon ordered a different type, and I liked that one a lot more.”

Laughner found a mold from a National Hockey League goaltender that would fit DeBrouwer with the CCM style. Beforehand, Laughner and DeBrouwer were using a rather odd method to construct the handle.

“What he was doing before was using a jigsaw to cut out a notch and you can imagine when you cut into a carbon-fiber stick, you’re going to ruin the integrity of it,” Laughner said. “We were breaking a lot of sticks, but once we were able to get that trigger from CCM, it was a game-changer for him, and it seems to have worked out well for him.”

Players go through numerous sticks during the season. Roughly 50,000 hockey sticks are used each year across the NHL, according to an estimate by Detroit Red Wings equipment manager Paul Boyer in a USA Today story.

“I usually do a new one for every game,” Arizona Coyotes defenseman Jakob Chychrun said. “It’s got to be around 80, but there’s definitely a lot of extra sticks for sure.”

“I go through quite a bit of sticks each season,” Walker said. “I think I drive Jon nuts sometimes.”

It can be crazy at times, but equipment managers appreciate the process in making sure each player is content with their stick from top to bottom.

“It’s just part of my job and I enjoy it,” Laughner said. “Anything they want to change, we can change. It seems like some of the best scorers are guys who are constantly tinkering, like Johnny. That desire to always get better with their sticks is really cool to see in those players.”

Outside of the construction, there are quite a few superstitions that roam around the locker room. Sticks are right at the center of hoping for some “lady luck” on the ice.

“You can have a guy that won’t have you look at his stick, and you can have a guy who couldn’t care less,” Chyrchun said. “I’d say I’m somewhere in the middle. I definitely have a few routines I like to go through before games with my sticks. Sticks are definitely involved in a lot of superstitions. Some guys don’t want their blade touching the ice or ground before they go out.”

“I am pretty specific about my tape job,” Walker said. “For the past 10 years, I’ve been taping my stick the exact same way. If I haven’t scored in a while, I’ll go ahead and put white tape on instead of a black tape, but I usually stick with black.”

It’s not just a stick. For hockey players, it’s a sacred piece of equipment.