PHOENIX – A team led by University of Arizona astronomers has discovered the most distant quasar found to date. Researchers hope the quasar, which is more than 13 billion light-years from Earth, will provide answers to how galaxies formed after the big bang.

“It was a relief to find,” said Feige Wang, lead author of the quasar’s research paper and Hubble Fellow at the University of Arizona’s Steward Observatory. “We have been searching for this quasar for almost five years. We knew it was there somewhere.”

To find quasars, team members select celestial objects they believe may be quasars based on data from various imaging surveys. Capturing light spectrum data through a powerful telescope, they analyze it to determine whether the object is a quasar. This new quasar – J0313-1806 – was spotted with the Magellan Baade telescope in Chile in November.

“On that night of the discovery, the (quasar) was one of the last objects that we were going to be able to observe for a while because we couldn’t use the observatory again for another few months,” recalled Xiaohui Fan, co-author of the paper and associate head of the UArizona department of astronomy. “We didn’t want to miss the chance of observing it because it might be interesting. And, of course, that turned out to be true.”

Fan said the astronomers left the observatory and celebrated with a drink.

The researchers presented their findings at the 237th meeting of the American Astronomical Society in mid-January and submitted their research paper for publication in Astrophysical Journal Letters. 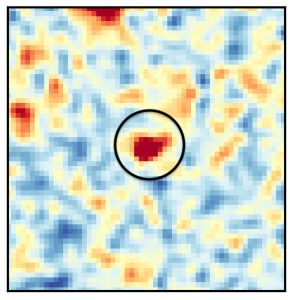 The University of Arizona team identified this bright spot on the Magellan Baade telescope as quasar J0313-1806. (Photo courtesy of NOIRLab/NSF/AURA/J. da Silva)

Quasar J0313-1806 – named for its coordinates in the universe – is powered by a young supermassive black hole with a mass of 1.6 billion suns. Astronomers say the quasar dates back to 670 million years after the big bang happened, “when the universe was only 5% its current age,” according to a UArizona press release. Scientists want to understand how this quasar came about in such an early black hole to gain insight into how black holes, and, ultimately, galaxies, grow.

“We’re surprised by how massive this quasar is in such a young universe,” Fan said. “That’s one of the most exciting parts of this research is trying to figure out, well, if you have these massive and bright (quasars), what does that mean for the formation of black holes? For galaxies?”

Quasars are one of the brightest sources of light in the universe and are the nucleus of an enormous galaxy. At the center of the quasar’s galaxy is a black hole that constantly emits matter. J0313-1806 is not only significant for its distance, but it also contains a black hole so heavy that the discovery is making scientists question their hypotheses of how black holes form.

“This particular quasar has a black hole of one and a half billion times the mass of the sun, and it is from a time the universe was so young that it barely had time to form these objects,” Fan said. “We’re looking at a big object in a baby universe. So, the question is, how long does it take for these objects to form?”

These unanswered questions about the birth of galaxies have inspired the team to try to access more powerful telescopes. In searching for J0313-1806, the team used the Gemini North telescope and the W.M. Keck Observatory telescope, both in Hawaii, and the Gemini South telescope in Chile.

“We actually have a lot of optimism for this specific quasar,” said Wang, the study’s co-author. “But currently, we are very limited by the integrity of existing telescopes. Even with our biggest telescope, we can only see a point of light.”

Wang and the team have their eyes set on NASA’s orbiting James Webb Space Telescope, which is set to launch and begin orbiting the Earth this fall.

Jinyi Yang, who was on the quasar discovery team and is a Strittmatter postdoctoral fellow at UArizona, said the James Webb telescope “has high spatial resolution and high sensitivity that covers the wavelength range that we cannot reach with the current space and ground-based telescopes.

“With JWST,” she said, “we will be able to learn the properties of the central black hole and its host galaxy, as well as how the black hole affects the host galaxy, with unparalleled details.” After its launch, the Webb telescope will be an orbiting infrared observatory. With longer wavelength coverage than the Hubble Space Telescope which has orbited Earth since 1990, it will be able to look closer into the beginning of time and observe how galaxies formed.

“Each object you discover in the universe is a treasure because they are so rare and difficult to find,” said Richard Green, an astronomer at the Steward Observatory. “That is why we are so hopeful that NASA picks our proposal to use the Webb telescope to learn more. But, the selection is competitive.” 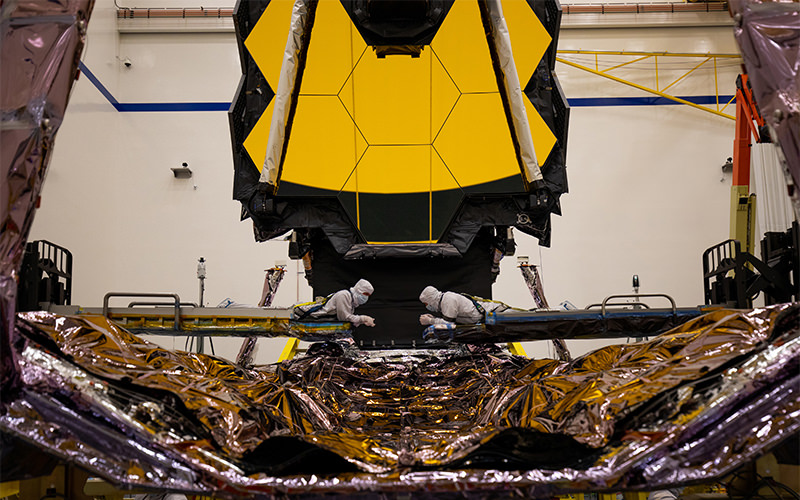 NASA scientists perform a tower extension test on the James Webb Space Telescope, which is set to launch in October. The telescope will orbit 1 million miles above Earth and allow astronomers to look even further into space than the Hubble Telescope, which was launched more than 30 years ago. (Photo courtesy of Chris Gunn/NASA)

Scientists all around the world have submitted proposals to NASA to use the James Webb Space Telescope once it’s in position. The selection committee will review, grade and rank the thousands of proposals before selecting only a few.

The UArizona team submitted its proposal to NASA in late November, but researchers won’t know whether their project was selected until next month.

“Once successful proposers are notified that their observing program has been accepted, they work with Space Telescope Science Institute’s technical staff to ensure the technical details from their proposal are appropriately captured in command sequences that will be uploaded to the observatory for execution,” Eric Smith, NASA’s Webb program scientist, said in an email.

The Webb telescope is scheduled to launch on European Space Agency’s rocket Ariane 5 in October, from the Guiana Space Center in French Guiana. The telescope will take about a month to maneuver into orbital position 1 million miles above Earth.

In the meantime, Yang said, the UArizona team is “taking multiwavelength observations of these quasars. At the same time, we are also improving our quasar finding method to try to uncover more distant quasars.”