I am so disappointed in Kelli Ward and the way the people around her have worked with her to intimidate and try to silence legitimate concerns from hundreds of state committeeman. These shameful tactics have no place in our great Republican party. Ducking legal subpoenas, threatening and intimidating state committeeman to try to get them to remove their names from lawful petitions, trying to run out the clock to subvert an April 24th meeting, and the rest of their troubling behavior, all just to stay in power, makes them no different from the swamp that we have spent the last many years trying to drain. After all, what could be more “establishment” than abusing your positions of trust to retain power for your own personal benefit?

Not following either our laws or bylaws seems to be a growing trend of late, particularly of our elected officials in both public and party office. What Ward and her supporters in this particular disagreement need to understand is that those of us who constitute the activist base of our party will never stop insisting that things be done right, and that our laws and bylaws be followed. It was the AZGOP’s refusal to honor our bylaws and to provide the audits that were guaranteed us that resulted in a historic call for a special meeting on April 24th.

That meeting will happen, no matter how many games are played to avoid it. Whether this April, June, October, or even into 2022, it will happen. And the harder they fight to do what is wrong, the more support our efforts to do what is right will receive from people who had previously been ambivalent about the issues at hand.

This state and this Republic face serious challenges making our elected officials honor their Oaths of Office. Instead of fighting efforts to do what is right, they should embrace them, do what is right, and then allow our party to move forward to face our next challenges in united fashion. Anything else is a selfish waste of party resources that discredits the Republican brand in the fight for election integrity, and allows us to be painted as hypocrites when it comes to transparency and elections.

Kelli Ward wants you to ignore my words and to believe her when she says I’m from the McCain/Ducey wing of the Party, and that I oppose the America First agenda. You know that is absolutely untrue, so let that one lie give you pause and reason to reexamine this struggle in proper context. Every effort to keep elections honest and pure must be made, no exceptions. Our bylaws, that is the rule of law this party is sworn to uphold, must be followed. If Kelli Ward doesn’t like them, there are legal ways to change them with the consent of the governed, but she cannot simply set aside any rules she doesn’t like. 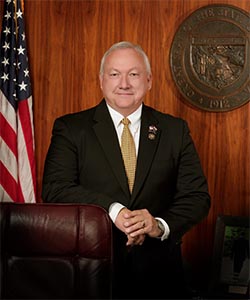 This Party stands for something and it is worth fighting for. The Republican Party is America’s only hope for restoring Freedom, and the movement within our Party that gives us the strength needed to fight and win is motivated by doing what is right. That is why we are insisting that the AZGOP do things right, and it is why we will not stop insisting.

The Honorable Russell Pearce is a former President of the Arizona State Senate, Chief Deputy of Maricopa County Sheriff’s Office, Judge, Director of State MVD, Board Member of the Arizona Conservative Club, President of BanAmnestyNOW, and Chief Deputy of the Maricopa County Treasurer’s Office. He was also the author of landmark legislation like SB1108 (Freedom to Carry Act), SB1070, English as Arizona’s Official Language, and Employer Sanctions.

Arizona Republicans Are Asking Who Is John Backer