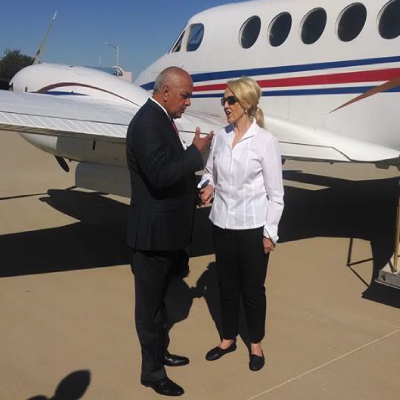 The Mayor of Nogales Arturo Garino, is disputing claims that authorities were not given a heads-up by federal officials prior to the relocation of illegal alien children to the state of Arizona from overcrowded facilities in Texas. The mayor, a staunch supporter of Board Patrol, is speaking out due to what he believes is unfair criticism of the agents.

While the Mayor’s devotion to the agents and pride in his community is clear, what was more evident was the fact that he is a proud American who is hesitant to criticize his country, and determined to keep politics as far away as possible from a discussion of the children in his community’s care.

However, it was politics that prompted him to speak out this week. A visit from Arizona Governor Jan Brewer and a letter from Tucson City Councilman Richard Fimbres sparked the recent spate of interview requests the Mayor has received this week.

“Border Patrol is doing a fine job. As a matter a fact I was in shock to hear Senator McCain saying the exact words I’ve been saying for two weeks about the children,” Mayor Garino said, adding, “Senator McCain came out and said ‘the children were fine.’”

Garino says the children are getting everything they need. As a matter of fact, as soon as they learned that the migrants had traveled on La Bestia , the train which carried them through Honduras, without belongings, Garino and his wife Cathy immediately went to work with the Santa Cruz County Board of Realtors putting out the call for children’s clothing.

“The thing is, I know the kids had only what they were wearing. They didn’t have any clothes. When we started the clothing drive we knew they were going to be staying there. Everyone is saying it is a detention center and it’s not. It is a processing center and transition center and their time there was anywhere between 3 days to 5 days… As a matter of fact it’s gotten faster now so we knew that they were going to shower a couple of times and we were hoping they could get a change of clothes. That’s why we started it.”

The love and compassion Mayor Garino and his wife Cathy, both natives of Nogales, Arizona, have for children is unmistakable. That compassion was evident when they spoke of the children in their community’s care. The Mayor and Garino were clearly emotional when they spoke of the children’s journey, which included being tied to the top of La Bestia in order to keep them from falling off if they fell asleep.

The two would be the first to complain if the children were not being properly cared for. Garino was pleased to report that the government personnel was doing all they could and noted that, FEMA personnel walk through facility pushing a snack cart for kids while they enjoy television and recreate on the playground.

Garino doesn’t understand Brewer’s claim that no one knew the kids were coming. According to Garino, he was given a few days’ notice prior to the arrival of children. However, Garino reveals in the interview with the AZDI, that someone must have known the kids were heading to Tucson, and they must have had a considerable amount of lead time.

Garino commented, “I got a phone call the Thursday (June 5th) before everything happened. Two days later there was close to 700 children there…They started sending them right away. I think they flew by plane and then busses from Texas. I would say in 5 days there was 750 to 800.”

Garino explains that he was notified by DHS on Thursday, June 5, and by June 9, 750 children arrived to a fully functioning processing center.

“I will tell you what was there when I visited on Monday (June 9th). There was a clinic with doctors and nurses that was fully operational. The dining area where they could feed 200 to 300 kids at one time. Four sections that were sectioned off with chain-link fence,” said Garino. “Another area with phone banks with a bunch of phones with the numbers of the 3 consulates. They also had 3 sections that they separated with computers so they can start processing and everything and then a huge tent area so the kids could play.”

On June 13th, on the James T. Harris radio show, on 104.1 KQTH, Steve McBryer and Catrina Sneva of Latitude Catering told Harris’s radio audience that FEMA did not allow any Arizona companies to bid on supplying food, health services, hygiene services, or any or the other services associated with emergencies. Instead, the two claimed that FEMA granted an automatic contract to a company in New York.

According to sources, FEMA had been working on the contract for some time. It was obvious because as one source said, “They are in the disaster business, but FEMA can’t do anything quickly.” Confidential sources report that FEMA had wanted to “keep the project under the radar, so they had to use the GSA because then they didn’t need to put it out to bid.”

The selected provider had to be able to provide two hot meals a day to approximately 1500 children. The chosen caterer had to prepare one sack lunch a day for all detainees and all food had to be eaten by hand; utensils were not allowed.

Sources report that at the time they were denied the Texas job, representatives were told by government officials that they should bid on the job when DHS opened the Arizona facility.

Still, Garino was happy with the heads-up, which he likely received only due to his good relationship with Customs and Border Patrol. “They are getting better and better every day,” says Garino of the conditions. “Homeland security is doing a great job.”

Just as quick as he is to defend the U.S. government against critics, he is just as quick to criticize the cartels. Garino says that it is well-known that the cartels were behind much of the whisper campaign which held promises for parents. If they sent their kids north, they would be accepted and live in freedom and prosperity.

Garino says that the cartels are making a lot of money off of the transport of the illegal aliens. Calling out the cartels is not an easy thing to do in Arizona and it is especially brave immediately along the border. But the popular mayor is a Vietnam veteran and a former law enforcement officer, who doesn’t seem to let fear stand in his way.

Garino says that it is in the state Coahuila, Mexico, which stretches 318 miles along the U.S. Mexico border, that the cartels hold the migrants hostage and receive payment from loved ones or sex traffickers in the U.S.

Some 140 to 200 illegal aliens are arriving daily at the Nogales Border Patrol Station, according to Garino, who says that the children are then cleaned up, give new clean clothes, processed by agents, and allowed to contact the embassies of their country of origin. The Mayor said that after approximately 3 to 4 days the entrants are sent off to military bases in California, Oklahoma, and Texas.

Those not turned over to relatives, will be settled into housing facilities in communities like the two being prepared in Tucson. The deportation process for minors takes approximately 3 to 4 years, and it is unlikely they will ever be deported.

Although Garino says that as a grandfather, he knows the look and demeanor of minors and dismisses the claim that not all of those housed at the Nogales station are under 17, sources within government confirm what Border Patrol agents have suspected.

Agents report that cartel and gang members have been turning themselves into Border Patrol agents claiming that they are 17 years. According to one source, the agents have been instructed not to question the claims and they are turned over for processing with the minors.

Garino says he was informed by DHS that the process will continue all summer. New minors are received at nearly the same rate as they are sent off.

Garino finds the reactions of Brewer, Fimbres and other politicians like the Gang of 8 puzzling. They certainly all are unknown to the Mayor or the largest town on the Arizona Mexico border.

According to Garino, Brewer has been to Nogales twice. Her second visit was the one this week; when she showed up only to scold the feds and offer no assistance.

Richard Fimbres was asked by asked by child advocate Richard Hernandez to assist the children of the Sunnyside School District in Tucson, and refused according to Hernandez, but he had plenty of outrage about the kids, from another country being housed in a city 100 miles to the south of his.

The Gang of 8 flew in, had their photo op, and never contacted local officials.